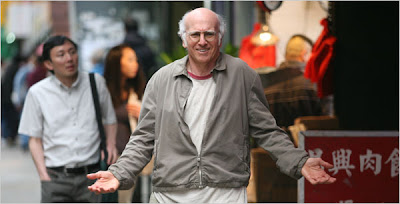 Woody's latest isn't what it seems. That's the point. 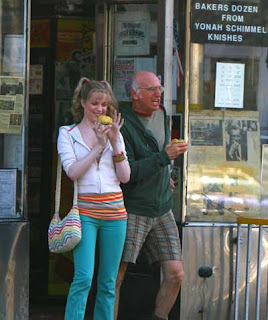 Like most of Woody Allen's other late-career releases, his newest "Whatever Works" has been casually dismissed by movie opinion-makers, starting with the shrugs it generated at The Tribeca Film Festival.

And, frankly, for the first ten minutes or so, as star Larry David (standing in for Woody) talks directly to the camera and seemingly refuses to stop, the film had me squirming and cringing. "I already hate it," I whispered to my wife, ready to bolt.

Its disasterous opening notwithstanding, "Whatever Works" quickly evolves into a highly companionable morality fable about a solitary, opinionated apathist/pessimist (the David/Allen character) who speaks authoritatively and negatively about life and people, threatening to poison everyone around him. The glory of the film is that it cleverly upends his dire theories, shrewdly pulling him into an extended family of free thinkers who have all taken his opinions and rehabilitated them - and him.

His life turns out to be a happy accident.

David plays Allen without resorting to the kind of mugging that other actors have adopted in Allen films and he's encircled by a deft ensemble - most notably, Evan Rachel Wood, Ed Begley, Jr. and Patricia Clarkson.
Posted by joe baltake at 6:22 PM

Got to try to squeeze this one in at some point. Looks like a possible return to form (supposedly it's based on a script Woody wrote ages ago).

By the way, in one sentence you refer to Larry David as Larry Charles.

Fixed. Thanks, Jay! What can I say? Old age. BTW, the film is not without its problems, particularly that opening. But if you stick with it, you'll have a wonderful time. It grows in performance and in retrospect.

I'm not so sure. To us, the whole thing seemed like it was written/directed for the stage. Evan Rachel Wood's many and overwrought gestures are the most obvious example. Everyone played it a little too big for me. I did like Patricia Clarkson and enjoyed the portion of the movie with her character. But we were expecting more. Including a richness to the cinematography that we look for in Woody's films.

Susan- I agree with you that a lot of "Whatever Works" feels like a stage play - particularly those scenes set in Larry David's apartment, which feels more like a set than an actual living space. Wood's excessive gestures didn't bother me because I felt she was playing an artless, exuberant character. All in all, the film grew on me. I loved how everyone changed, except for the David/Allen character, who remains essentially the same, only a tad happier.