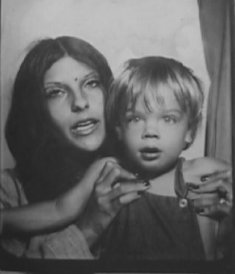 Jonathan Caouette's incredibly modest but undeniably impressive "Tarnation" was the last film that I saw as a professional film critic. After spending most of my life at the movies, and all of my adult life reviewing them, I had decided to live my own script - retire young and kick back. And Caouette's film lent itself perfectly to my valedictory review because it's the kind of movie that I think I championed as a critic - and because his film struck me in such an intensely personal way.

We all react to movies in different ways because, well, no two of us are exactly like. And when a film seems to be talking to us, directly and personally, its meaning can become revelatory - particularly when it arrives at a crucial point in our lives.

For me, "Tarnation" was the right film at the right time.

The movie is essentially a video diary of Caouette's chaotic life, a filmic mosaic consisting of bits and pieces of memorabilia - Super-8 home movies, both Betamax and VHS video footage, family snapshots, old answering-machine messages, excerpts from movies and TV series from the '70s and even "re-enactments" - that Caouette was moved to edit together using the iMovie software on his laptop. He reportedly had 160 hours' worth of personal material and spent $218.32 to put it together.

Caouette, 32, isn't a trained filmmaker, but he is a natural one. He has a sense of rhythm and he knows what's important and what's not and, as a result, his film flows naturally.

"Tarnation" opens with a re-enactment - with Caouette in Queens, receiving a phone call notifying him that his severely troubled mother back in his native Texas has overdosed on lithium and has more or less deteriorated into a zombie. This latest personal trauma prompts Caouette to go to Texas and bring what's left of his mother back to New York, while filling us in about their lives.

Renee LeBlanc, his mother, was born and raised in a Houston suburb and was a child model until a freak accident ended her career - and seemingly her life - at age 11. She fell off the family's garage roof and was temporarily paralyzed for six months. Her parents, Rosemary and Adolph Davis, were simple people who went along with the confused doctors when they suggested a round of electro-shock treatments. Caouette reasons that his mother was subjected to 200 such treatments, making LeBlanc unstable and incorrigible - and erasing her personality.

Caouette's father left before he was born - he didn't know LeBlanc was pregnant - and she eventually took her little boy and ran off to Chicago. While on the road, she was raped in front of her 4-year-old son by a man who picked them up. Kicked off a bus taking them back to Houston for making a disturbance, LeBlanc was arrested and Jonathan was placed in foster homes, where he was physically and sexually abused. He ended up living with his grandparents, whose hold on reality was tenuous at best.

By age 10, Caouette was aware that he was gay, but didn't know that he had his own mental illness - a "depersonalization disorder," which means he sort of sees himself from the outside. In keeping with this idea, "Tarnation" has no narration to hold its pieces together but instead uses detailed title cards in which Caouette continually refers to himself in the third person.

Caouette's personal documents here are utterly fascinating. We see self-filmed video footage of him, at age 11, doing improvised monologues as abused women, one white and one African American. It's incredible - and a little scary. Later, in what feels like a companion scene, we see LeBlanc in New York, her madness full-blown now, also "acting out" for Caouette's camera.

We also see Caouette involved in his high school's bizarre drama club, helping to construct a musical based on David Lynch's film "Blue Velvet," using songs by Marianne Faithful. Then we hear him recount how he used to get into gay bars by disguising himself as "a petite goth girl" and how his mind was eventually blown on a joint laced with PCP and embalming fluid.

And in a collage that is nothing short of jaw-dropping, Caouette charts his teenage years using footage of Ruth Gordon and John Casssavetes in "Rosemary's Baby," a scene of Dolly Parton singing "A Lil' Ole Bitty Pissant Country Place" from "The Best Little Whorehouse in Texas," the sound of Glenn Campbell singing "Wichita Lineman," moments from amateur horror films he made with his friends (with titles such as "The Spit and Blood Boys") and, most evocative, a shot of himself lip-syncing to Suzette Charles' rendition of "Frank Mills" from the "Hair" soundtrack. What comes through all of this is the filmmaker's psychic pain and confusion. 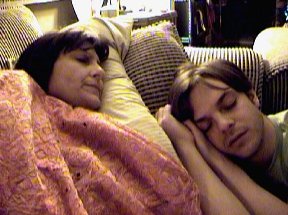 But it all comes back to the tragically damaged LeBlanc, one of the most affecting figures you're likely to see in any movie. If this were a fiction film, Debra Winger would be playing this role.


Once vital and beautiful, her deterioration is now beyond repair.

Caouette needs answers that his mother is not equipped to give. He wants to get to know her and, at the same time, as he puts it, "I'm so afraid I'm going to turn into my mother."

"Tarnation" is about life slipping away beyond our control, not just our own but the lives of people precious to our lives, people who, once gone, will leave a void that can never be filled. In Caouette's case, he began losing his mother the day he was born. In a scene that will forever haunt me, we see LeBlanc taking a nap - temporarily at peace, free from her demons.

"She's inside me," Caouette comments softly.

I originally saw this film shortly after my mother died, and while I certainly didn't have the miserable childhood that Caouette experienced, I related strongly to his sense of helplessness, to his desire to stop time and perhaps go back in time. The line, "she's inside me," really reverberates and says it all.

There are kinds of movies. The special ones - such as "Tarnation" - will stay with me forever - like memories of a long-gone loved one.

(Artwork: Family snapshots of filmmaker Caouette and his mother Renee, then and now, from Wellspring's "Tarnation")

Anyone interested in perusing some 2060 of my film reviews, dating back to 1994, can do so by simply going to RottenTomatoes.Com
Posted by joe baltake at 1:12 PM 1 comment: 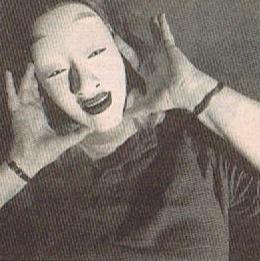 (Artwork: The great critic Stephanie von Buchau hiding behind a facade, photographed by Anne Hamersky in San Francisco in August, 1990)
Posted by joe baltake at 11:48 AM 4 comments: