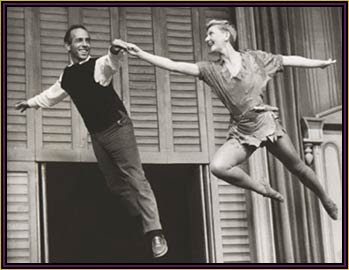 Thanks to the focused, unrelenting drive of producer Neal Meron and his late partner, Craig Zadan, TV musicals are not only back in vogue but also treated as events by the networks that seem fully committed to them.

NBC's reboot of Rodgers and Hammerstein's "The Sound of Music" (this version presented, thankfully, in full fidelity to the stage play) is the crown jewel among the Meron-Zadan productions, while Fox's remake of "Grease" (stunningly directed by Thomas Kail and Alex Rudzinski) remains the best TV musical to date, hands-down. In my opinion.

Whereas most viewers may assume that TV musicals are something new, people of a certain age know better. That's because there's a huge time gap between the musicals that have been recently made for TV and those that were staged decades ago - when they were also viewed as "events."

Arguably the first stage musical recorded for TV - but, inarguably, the best known - is Mary Martin's  "Peter Pan," which originally aired on NBC's "Producer's Showcase" on December 8, 1960. (Martin also performed two earlier live versions of "Pan" - aired March 7, 1955 and January 9, 1956 - that, to the best of my knowledge, were never preserved on film.)

Mounted for Broadway in 1954 by Jerome Robbins,"Peter Pan" originally had only a few incidental songs by Moose Charlap and Carolyn Leigh, but was later expanded with songs by Jule Styne and Betty Comden & Adolph Green. Vincent J. Donehue directed the 1960 TV version which was rescued and restored a decade or two ago by the ever-resouceful Michael Arick and made available on DVD. Arick's restoration of the 1960 "Peter Pan" materialized during the aforementioned gap and became a reminder of the TV musical as a neglected sub-genre of musical-comedy history.

There were also two other noteworthies that aired on television during its early years. Delbert Mann's "Our Town," an original musical based on the Thornton Wilder play that was televised (also by NBC's "Producer's Showcase") on September 19, 1955. It starred Frank Sinatra as the stage manager and Eva Marie Saint and Paul Newman as the young leads, Emily Webb and George Gibbs. The score by James Van Heusen and Sammy Cahn included the haunting title song and the popular "Love and Marriage."

The Rosalind Russell-Leonard Bernstein collaboration, "Wonderful Town," opened on Broadway at the Winter Garden Theater on February 25, 1953, where it ran for 559 performances, and was adapted for TV by CBS, airing on November 30, 1958. A collection of autobiographical short stories by Ruth McKenney, under the title "My Sister Eileen," was the show's source. (The stories have been adapted variously into a 1940 play starring Shirley Booth, a 1942 film starring Russell, a 1955 screen musical with Betty Garrett, Janet Leigh and Jack Lemmon, and a 1960 CBS sitcom starring Elaine Stritch, all of them titled ... "My Sister Eileen.") Bernstein composed the music for "Wonderful Town" and Comden & Green (again) wrote the lyrics. George Abbott directed the Broadway original; Herbert Ross and Mel Ferber co-directed for television.

At least these three titles are still remembered, especially by Broadway afficianados, but there are several more, all waiting to be re-discovered... 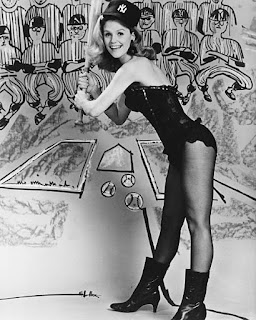 "Damn Yankees!" When I interviewed Angela Lansbury while she was promoting "Bedknobs and Broomsticks," our conversation turned to Lee Remick, with whom Lansbury had appeared on screen in Martin Ritt's "The Long, Hot Summer" and on stage in Stephen Sondheim's "Anyone Can Whistle." Lansbury commented how Remick always wanted to be a musical-comedy star. Well, she got her chance in the role of Lola in director Kirk Browning's 1967 TV version of the Richard Adler-Jerry Ross faustian musical about baseball.  The production, bogged down with the era's psychedelic graphics, is pretty bad, but unlike the excellent 1958 Warner film adaption directed by George Abbott and Stanley Donen, this version kept the Ross-Adler score intact, reinstating "Near to You," "The Game" and "A Man Doesn’t Know."

Remick is more than terrific as Lola and the superb cast around her included Phil Silvers as Mr. Applegate, Jerry Lanning as Joe Hardy, Linda Lavin as the reporter Gloria Thorpe, Jim Backus as Benny, Ray Middleton as the elder Joe, and Fran Allison (of "Kookla, Fran and Ollie") as his wife Meg. NBC's General Electric Theater broadcast the show on April 7, 1967.

"I Do! I Do!" Another with Remick who teamed with Hal Linden in the roles essayed on stage by Mary Martin and Robert Preston. Based on the Jan De Hartog two-character play, "The Four Poster" (which starred the husband-wife team of Rex Harrison and Lili Palmer), the plot takes place entirely in the bedroom of a couple married for 50 years. Tom Jones and Harvey Schmidt, of "The Fantasticks" fame, composed the songs. (The Jones-Schmidt score includes "My Cup Runneth Over with Love.")  Gower Champion, who directed the stage musical, encored. Champion originally wanted to do the material as a film in 1969 with Julie Andrews and Dick Van Dyke but, by then, movie musicals were undesirable. Champion filmed the show before a live audience in Los Angeles in 1982. It was broadcast a year later. I can locate no information about the network involved, but I've a vague recollection that it was PBS. Any ideas? Share.

"It's a Bird ... It's a Plane ... It's Superman!" Back in 1966, Harold Prince joined forces with "Bonnie and Clyde" scribes Robert Benton and David Newman for an ambitious musical version of the "Superman" comic, with songs by "Bye Bye Birdie's" Charles Strouse and Lee Adams. It was an exhilarating show with standout supporting performances by Linda Lavin, Jack Cassidy and Michael O'Sullivan but it lasted at the Alvin Theatre for only 129 performances. 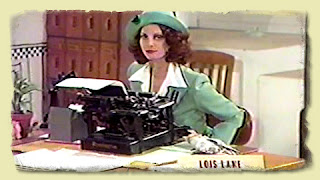 Nine years later, for some bizarre reason, ABC decided to resurrect the material for an abbreviated 90-minute adaptation, which it then promptly abandoned. It was televised only once - and in an 11:30 p.m. time slot - and then disappeared. The cast included David Wilson as the title character/Clark Kent, Lesley Ann Warren as Lois Lane, Kenneth Mars as columnist Max Mencken (Cassidy on stage), Loretta Swit as reporter Sydney Carlton (Lavin on stage), and David Wayne, a hoot as the villain, mad scientist Dr. Abner Sedgwick (O'Sullivan on stage). Broadcast date: February 21, 1975.

Oh yeah, it should be noted that Benton and Newman also collaborated on the 1978 Richard Donner "Superman" movie with Mario Puzo, an uncredited Tom Mankiewicz and Newman's wife, Leslie. 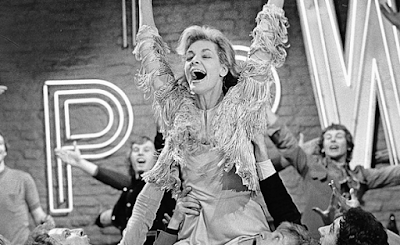 "Applause" Larry Hagman stepped in for Len Cariou for the filmed TV version of Lauren Bacall's Tony Award-winning (but watered-down) musical version of "All About Eve." It was shot by CBS during the production’s London run, with most of the West End cast. Penny Fuller and Robert Mandan, however, joined the cast, recreating their original Broadway roles. Also starring Harvey Evans, Sarah Marshall, Rod McLennan and Debbie Bowen. The score? By "Bye Bye Birdie's" Charles Strouse and Lee Adams again. Broadcast date: March 15, 1973. 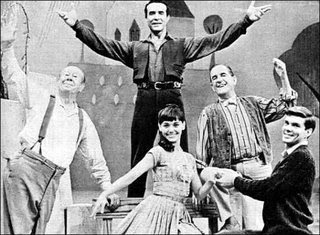 "The Fantasticks" Another Tom Jones-Harvey Schmidt musical, something of  an off-Broadway legend. David Greene ("Godspell") and Fielder Cook co-directed a terrific cast for the NBC telecast  - Ricardo Montalban, as El Gallo, John Davidson & Susan Watson (the original Kim Macafee in the Broadway version of "Bye Bye Birdie") as the young lovers, and  Bert Lahr and Stanley Holloway as their fathers. Broadcast date: October 18, 1964. 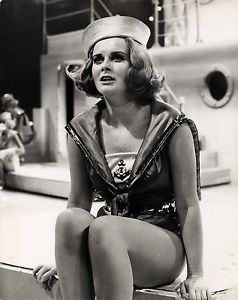 "The Fantasticks" would, of course, be eventually filmed by Michael Ritchie for United Artists - and deconstructed mercilessly (i.e., heavily edited) by a Francis Ford Coppola assistant.

Thankfully, Twilight Time included a BluRay of Ritchie's original 106-minute cut in its DVD reissue of the 86-minute Coppola version.


"Brigadoon" The first of a trio of TV musicals, this one for ABC, starring Robert Goulet. Fielder Cook was on board again as director and Goulet's co-stars included Sally Anne Howes, Peter Falk and Marlyn Mason. Broadcast date: October 15, 1966.

"Carousel"  Goulet was well-cast as Billy Bigelow, opposite Mary Grover as Julie Jordan, in this ABC version directed by Paul Bogart. Broadcast Date: May 7, 1967. 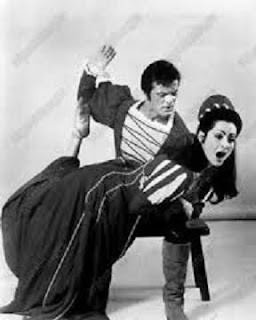 "Annie Get Your Gun" Mary Martin played Annie Oakley to John Raitt's Frank Butler in Vincent J. Donehue's NBC version of the Irving Berlin musical. Broadcast date: October 28, 1957. (Doris Day and Robert Goulet - yes, Goulet again - recorded a Columbia album of the show's score in 1963, but despite what many assume, there was never a TV show attached to it.) 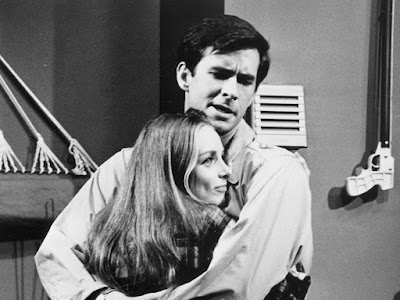 "Evening Primrose" An original Stephen Sondheim musical, written especially for ABC Stage 67 by playwright James Goldman from a short story by James Collier. Anthony Perkins starred opposite Charmian Carr (of "The Sound of Music") as a poet who lives clandestinely in a New York department story. (It was filmed at Stern Brothers Department Store on West 23rd Street by director Paul Bogart.) Broadcast date: November 16, 1966. 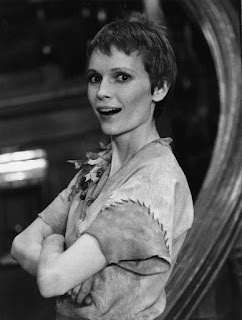 And, finally, getting back to "Peter Pan," there was another version - shown on NBC on December 12, 1976 and starring Mia Farrow as Peter and Danny Kaye as Captain Hook. It had a new score by by Anthony Newley and Leslie Bricusse. And, of course, Allison Williams played Peter in yet another version for NBC - produced by Meron and Zadan. This was was a remake of the Mary Martin show from 60 years earlier. Broadcast date: December 4, 2014.

Notes in Passing: Meron and Zadan's TV output during the past two decades has been impressive, if hit-or-miss. Their resume includes the excellent (Rodgers and Hammerstein's "Cinderella"), the hugely disappointing (Bette Midler's "Gypsy") and the downright unwatchable (Matthew Broderick's "The Music Man"). During this period, there was one outstanding TV musical that they didn't produce - Gene Saks' "Bye Bye Birdie" starring Jason Alexander and Vanessa Williams which, unlike the 1963 theatrical film, preserved those qualities that made the show a hit on Broadway. Yet another TV version (announced years ago) is planned by Meron - that's if its star, Jennifer Lopez, ever finds the time to commit to it. 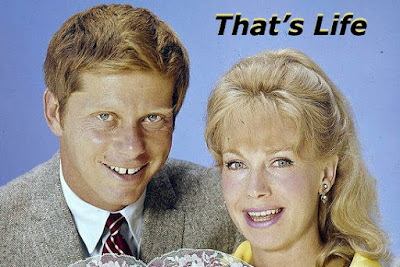 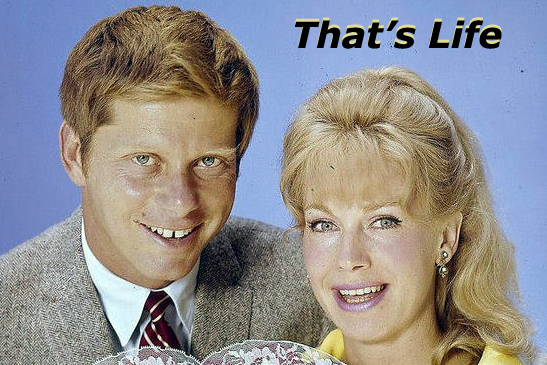 Finally, a deep bow to ABC which, in 1968, attempted a weekly sitcom which was actually a weekly musical comedy, titled "That's Life." It starred Robert Morse, E.J.Peaker, Kay Medford, Shelley Berman and a slew of game guest stars, all willing to break into song and dance every week.