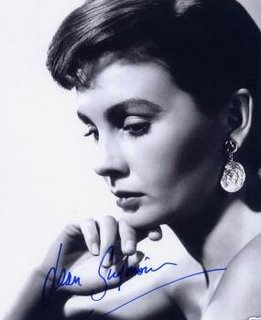 A shameless, obscenely entertaining guilty pleasure, "Home Before Dark" is a tangy, campy soap opera in which director Mervyn LeRoy out-Sirks Douglas Sirk. This handsome 1958 Warner Bros. film deserves the success - and the following - that Sirk's "Imitation of Life" enjoyed a year later. Instead, it has fallen into oblivion. Who knows what happened? Perhaps, at 136 minutes, the film was a tad too long to be fully companionable for audiences. Too long? Personally, I wouldn't sacrifice a minute.

Or perhaps Joseph F. Biroc's handsome black-and-white cinematography put off people who were expecting Technicolored glamour. Or maybe, Jean Simmons, its leading lady, was more of an actress than a Star, unlike "Imitation of Life's" Lana Turner who clearly relished the high-camp theatricality of Sirk's piece.

The skeletal plot, written by Eileen and Robert Bassing (based on a novel by Eileen), is also something of a heartbreaker, with Simmons cast as Charlotte, a woman unwanted by her pretentious husband Arnold (Dan O'Herlihy), who conspires with her stepmother Inez (Mabel Albertson) and stepsister Joan (Rhonda Fleming) to steal Charlotte's inheritance from her father. Charlotte is especially fragile, having just been released from a state mental facility in Massachusetts - and it becomes clear what drove her there. Exacerbating matters, her husband is having an affair with the stepsister.

LeRoy masterfully exploits the juiciness of his material, taking it into camp when necessary, such as the delicious sequence in which, Charlotte, more unstable than usual, has her hair done up like Joan's platinum 'do, buys a dress that Joan would wear and generally makes a fool of herself at a dinner party - all to impress Arnold and win his love.

Simmons, who gives a quiet, relatively simple performance considering the material, won the New York Film Critics award for this top-notch, seriously neglected film that has never been made available in any format. Bring it back already.

(Artwork: Studio publicity shot of Jean Simmons in Warner Bros.' "Home Before Dark")
Posted by joe baltake at 9:01 AM 9 comments:

Can anyone out there please explain why HBO, the premiere cable channel, doesn't show any of its feature films in wide screen? Never. Ever.

Yes, it shows its own original films letterboxed in wide screen.

And it shows its original series, such as "The Sopranos," in wide screen. Even Bill Maher and Bryant Gumble.

Their theatrical trailers are shown in wide screen, but not the films themselves.

Does anyone know? Can anyone explain this bizarre inconsistency? If so, share. 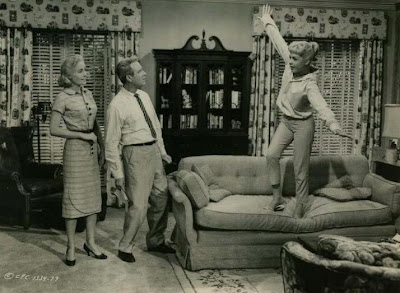 For better or worse - probably worse - we live in a celebrity-conscious country with a particular communal, unhealthy weakness for Movie Stars.

Our obsessions are dictated by a media which force feed us a controlled diet restricted to one personality, usually to the exclusion of others.

Case in Point: Twenty years ago, Tom Cruise was the Chosen One, singled out from among an auspicious group of young actors, many of them much more accomplished than Cruise. Today, it's Shia LaBeouf, whose exact appeal actually confounds me even more than Cruise's.

The process has to be relentless because the public, way too easily distracted, eventually gets bored. But you also run the risk of overkill.

All of this is in preamble to commenting on the state of politics in general and the current election in particular, a situation wherein the power of "personality" has somehow managed to trump important issues.

Less than two weeks ago, opinion-makers were preoccupied with the impossible chic of Barak Obama. Now, we have a popular new flavor - one Sarah Palin - popular at least with the scoop-driven media.

To be perfectly honest, I really have no idea at all what the public actually thinks of Sarah Palin - does anyone? - only what the pervasive, intrusive, repetitive pundits/opportunists at CNN, MSNBC and Fox News have to say.

Right now, she's being marketed to a fare-thee-well - like a movie star. Her party has shrewdly given her an exclusive air, making it about as difficult for the press to get to her as, say, Angelina Jolie. Two weeks ago, very few people even knew who she was; now she's on the cover of Time.

And she already has her own action figure. The machine seems to be moving faster than ususal.

A Star Is Born. Overnight.

The question is, will the public permit itself to be manipulated by the media noisemakers once again, follow suit on cue and obediently, and eagerly, queue up at the box office - er, I mean voting booth?

Only time will tell, but for what it's worth, I purposely avoided using a shot of Palin here because, frankly, she already bores me. Overkill.

(Artwork: Sandra Dee, left, Mary LaRoche and Arthur O'Connell as Sarah and The McCains)
Posted by joe baltake at 8:36 AM 12 comments: 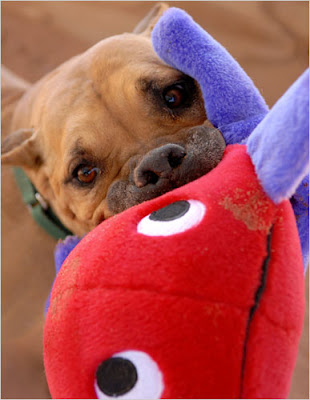 If there is a God - and at this point in my life, I seriously doubt that there is - how can He (or She) explain the likes of Michael Vick and the animals at his notorious dogfighting compound?

I'm not talking about the four-legged animals that were routinely exposed to horrors there, but to the alleged humans that performed these horrors on innocent creatures - babies, really - on a daily basis.

The picture above is of Georgia, a female pit bull that was rescued from Vick's disgusting Bad Newz Kennels by members of Best Friends Animal Society, who are profiled tonight (at 9 p.m., est.) in Darcy Dennett's new documentary, "Saving the Michael Vick Dogs," airing as a two-hour episode of National Geographic's DogTown series.

She was forcibly bred on a daily basis, with her tormentors using what Vick called "rape stands" to keep the females stationary while they were being... Well, you know. Georgia also had all of her teeth pulled, presumably by a professional vet (and reprehensible human being) so that she would not bite the males sexually mauling her.

Yes, the ugly idea of dogfighting is just the tip of a really treacherous iceberg. What precedes it is truly grotesque and has rarely been documented - until now. This is a story that even Oprah, an avowed dog-lover, ignored.

These poor, unsuspecting creatures, unlucky to be adopted by animal abusers, were enslaved and tormented 24/7 for their fights - in genuinely horrific training programs. I've always been rather disturbed by the arbitrariness of animals' fates - some end up as pampered pets, some as food. In the case of dogs, they can be fortunate enough to become someone's companion - Man's Best Friend - or arbitrarily (there's that word again) condemned as cheap cash cows for the greedy and inhumane.

The females, like Georgia, are literally bred to death producing puppies that are then (1) strapped onto treadmills for hours at a time, (2) conditioned to hate their own species, (3) starved for days at a time and (4) punished in unspeakable ways when they fail to "perform."

And other animals – cats, kittens, puppies and other dogs – are sacrificed as "training bait."

I think it’s safe to assume that these animals weren't cuddled or played with, or walked, brushed or even patted on the head. Instead, they have their ears cut off, probably while still conscious. And then, as we've read, they are "executed" via hanging, drowning, body slams and worse when they are no longer useful – i.e., profitable. 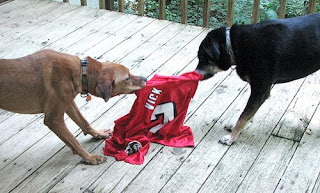 I can’t even begin to imagine the constant stress that all these animals experience during their short, sad lives. It still goes on - in other "kennels." And I truly believe these poor animals are driven insane by this treatment.

The odd thing - what's so touching - is how forgiving these animals are, how gentle they are. I find it hard to wrap my mind around a God who would put these innocents at the mercy of thugs.

As Anita Gates points out in her excellent review in The New York Times today, it is unlikely that Vick needed the money brought in by this cruel, dubious business. He made millions tossing a ball. He had it made.

No, this is simply a matter of pure, mean-spirited cruelty for the sake of cruelty - cruelty almost gleefully executed. And that a black man, whose ancestors more than likely experienced approximately what Vick's dog endured, would participate in this torture is truly mind-blowing.

Vick, still serving his 23 months in prison, apologized to the kids he let down. He never bothered apologizing to the animals he casually abused.

So much for Man’s Best Friend, right?

Note in Passing: Check out the hugely affecting Peace for Dogs video. Sweet. Not at all graphic.

(Artwork: Two views of Georgia, saved from a life of forced breeding and other assorted daily cruelties in the documentary, "Saving the Michael Vick Dogs," presented as part of National geographic's "Dogtown" series; two dogs tear apart Vick - only in effigy unfortunately)
Posted by joe baltake at 2:09 PM 12 comments: