Theater directors rarely get any credit when they venture into film. Case in point: I loved what Morton DaCosta did with the film versions of plays that he originally directed on stage, "Auntie Mame" (1958) and "The Music Man" (1962). Both are noteworthy for their fidelity to their stage predecessors and yet are impressively cinematic.

DaCosta would direct only one other film - 1963's now-forgotten "Island of Love," starring Robert Preston, Tony Randall and Walter Matthau.

You could say, "That was then, this is now." But matters haven't changed. 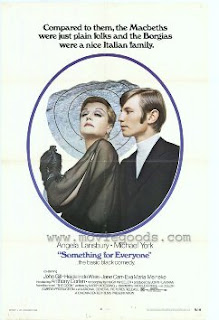 Harold Prince made what I thought was an auspicious film directing debut with the delicious 1970 Angela Lansbury-Michael York black comedy, "Something for Everyone," one of those sophisticated sex comedies in which the randy young hero (York) sleeps his way through every member of a family (shades of Pasolini's "Teorema" with Terence Stamp).

The film is just about impossible to see nowadays, although Prince's second (and last) film, a truncated version of the Sondheim musical, "A Little Night Music," sas been available on DVD.

The estimable James Lapine, meanwhile, made one of the best films of 1991 - now also forgotton, of course - with "Impromptu," a randy farce about the affair between Frederic Chopin (Hugh Grant) and George Sand (Judy Davis, alas, in oneof her last great film roles). Mandy Patinkin, Bernadette Peters, Emma Thompson and Julian Sand round out the cast.

I can't think of anything wrong with this film.

If rep houses still existed and had resourceful bookers, "Something for Everyone" and "Impromptu" would make a great double-bill.
Posted by joe baltake at 2:48 PM

"Something for Everyone" is one of guilty pleasures. Got a VHS copy of it on eBay about a year ago. This film should be seen by more people. It should be a cult film by now.

Is it a sign of being over-the-hill when one remembers seeing "Something For Everyone" in the theater?

I remember thinking that it was a great *idea* for a film, but that it didn't really work -- Harold Prince's cluelessness as to what to do with a camera being a prime factor. I wanted it to be a combination of "My Man Godfrey" and Joe Orton's "Entertaining Mr. Sloan," which the Prince-directed film never *quite* became.

I saw it in a revival house on a double-bill with the Fosse-directed "Cabaret," and I remember that both films -- along with all their other elements in common -- featured seduction scenes where the two lovers were surrounded by candles and candles.

As for the phenomenon of stage directors turned movie directors ... where would, say, Nicholas Hytner or Des McAnuff fit into this?

And I remember seeing Walter Matthau on Dick Cavett's show (are we dating ourselves sufficiently?) talk about "Island of Love." Apparently his character used a funny voice, and it was directly modeled on that of director DaCosta ... but neither DaCosta nor anyone else got around to acknowleding it.

Frankly, my memory of "Something for Everyone" has dimmed but I recall liking it a good deal, its directorial shortcomings nothwithstanding. (BTW, I can barely tolerate "Cabaret.")

I had no idea that Matthau modeled his vocal performance in "Island of Love" after its director Morton DaCosta. I'll have to listen closely - if I ever get to see the film again. Trivia: DaCosta is the voice of Patrick's father, narrating the contents of his will at the beginning of "Auntie Mame."

Re the two directors you mention, I expected more from Des McAanuff in terms of movies by now, and I think that Nicholas Hytner has an interesting, if limited, filmmography.

I haven't seen "Something For Everyone," but I very much liked "Impromptu" when I rented it many years ago - most probably in 1992, when it would have been released on video. As I recall, it even got good reviews, so I wonder why it's never made it to a DVD release. It's nice to see it spotlighted here, in any case.

I'm a fan of "Impromptu." Nice to know there are others.

"Something for Everyone" used to show up at rep theaters in NYC around 1980. Now I wish I'd taken the time to see it.

I'm a fan of "Impromptu." Nice to know there are others.

"Something for Everyone" used to show up at rep theaters in NYC around 1980. Now I wish I'd taken the time to see it.

I thought Judy Davis would become a major star after "Impromptu." What happened? I only see her in supporting roles and on TV.

IMPROMPTU is available on DVD, and has been for years: it's gone through several changes in cover design, but, aside from that, it's available from MGM.

I also loved the movie, and it's the kind of movie which, if it had been a big success, would have made Judy Davis a big star. But it didn't happen. But at least Judy Davis is still working (she's a regular on the USA series THE STARTER WIFE).