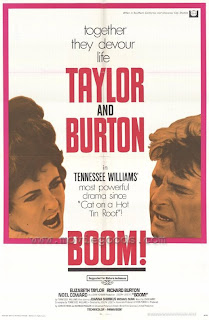 Much like Neil Simon, Tennessee Williams was that rare playwright whose stage works routinely made it to the screen, where they were often treated as events.

Even his flops were optioned by the Hollywood studios, although their screen counterparts were equally unsuccessful. Two come immediately to mind - one completely forgotten and the other remembered only as a camp classic. Both underwent title changes for their respective film versions.

Needless to say, a DVD incarnation has evaded both.

Let's start with his 1964 play, the wonderfully titled "The Milk Train Doesn't Stop Here Anymore," which made it to the screen in 1968 as a Elizabeth Taylor-Richard Burton vehicle, courtesy of Universal, under the lame title, "Boom!" 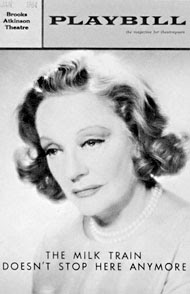 Produced for the stage by David Merrick and directed by Tony Richardson, "The Milk Train Doesn't Stop Here Anymore" starred the singular Tallulah Bankhead as Flora "Sissy" Goforth, an aging ex-Follies girl, retired on the Italian Riviera and writing her memoirs. Her days consist of dictating her autobiography and begging for injections from her nurses. This world is invaded there by swaggering young gigolo Chris Flanders (played on stage by Tab Hunter), known as the "Angel of Death" who upends her life. The play also starred Marian Seldes, Ralph Roberts, Ruth Ford, Bobby Dean Hooks and Konrad Matthaei.

Taylor played Mrs. Goforth in the Joseph Losey-directed film version, set atop a Mediterranean island where she makes her own rules. Burton plays Flanders, a man known for visiting to women shortly before their death. Noel Coward essayed the supporting role of intriguingly-named "The Witch of Capri, one of Mrs. Goforth's neighbors, and the supporting cast included Michael Dunn and Joanna Shimkus.

Williams second flop that made it to the screen is "The Seven Descents of Myrtle" which had a tryout at the Walnut Street Theater in Philadelphia and opened March 27th, 1968 at the Ethel Barrymore Theatre, with a cast consisting of Estelle Parsons, Harry Gaurdino and Brian Bedford, under the direction of José Quintero. 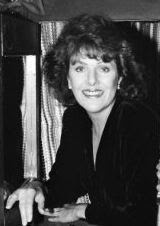 OK, here goes: Williams' play is about Lot (Bedford), a tubercular, impotent transvestite who has taken a wife named Myrtle (Parsons) who, in turn, is a prostitute and former showgirl, the sole survivor of the Five Memphis Hot Shots. Myrtle lives to nurse Lot back to health but Lot cares only about stealing the family property from his multiracial half-brother, Chicken (Guardino). Naturally, Chicken is attracted to Myrtle.

"The Seven Descents of Myrtle" closed after 29 performances. 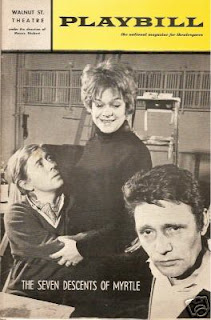 Sidney Lumet directed the 1970 film version, which was retitled "Last of the Mobile Hotshots" and was one of the few prestige films of that era to be rated X by the MPAA. Lynn Redgrave starred as Myrtle, James Coburn as Lot (renamed Jeb actually for the film), and Robert Hooks as Chicken. The film was made in New Orleans and St. Francisville, Louisiana, but forget the scenery. All that counted here was the idea of James Coburn playing a transvestite.

I don't know about you, call me a mosochist, but I want to see both these films again.

Anyone interested in perusing some 2060 of my film reviews, dating back to 1994, can do so by simply going to RottenTomatoes.Com
Posted by joe baltake at 4:16 PM 6 comments: 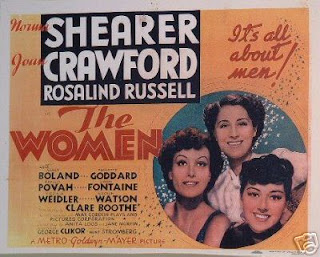 Diane English, the auteur of TV's "Murphy Brown," has been trying to get her planned remake of George Cukor's "The Women" in production for about ten years now. Stars have come and gone. Julia Roberts was once attached to it, but no more. Meg Ryan, however, still is.

What seemed like a bad idea a decade ago has grown on me. In fact, I started to indulge in fantasy casting at one point and, about a year ago, I mentioned to my wife that an all Latina cast might be a novel idea. In my head, the film would star Penelope Cruz, Selma Hayek, Eva Langoria, Paz Vega, Jennifer Lopez, Jennifer Esposito and Eva Mendez. Think about it. It could be fun. 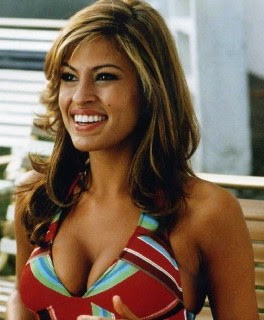 The 1939 Cukor film, of course, had a screenplay by Anita Loos from the Clare Boothe Luce play. English has written her own script and, in a move that's contrary to what's usually done today, has retained all the original names of the piece's characters. You may have already noticed.

Again, no men will be in the cast (unlike David Miller and Fay Kanin's 1956 musical remake with June Allyson and Joan Collins.)

After this, English moves on to "First Man," starring Meryl Streep as The President and Robert DeNiro as you-know-what.

Anyone interested in perusing some 2060 of my film reviews, dating back to 1994, can do so by simply going to RottenTomatoes.Com
Posted by joe baltake at 7:12 PM 8 comments:

Robert Benton on Sex and Violence in Movies 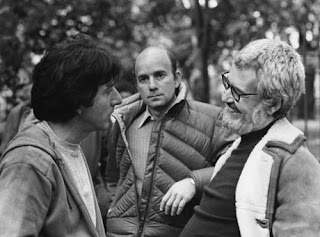 Matt Prigge, a film critic for Philadelphia Weekly, offered a highly readable
interview with filmmaker Robert Benton in the Sept. 26-Oct. 2 issue of the Philly alternative. Benton, of couse, was hyping his new film, "Feast of Love."

In the course of their chat, Benton had the following to say about sex and violence in American movies:

Odd? Not really, Bob. Think about it. This country was founded by angry Puritants - a bunch of people who were uptight and repressed about sex but had no qualms blowing off someone's head with a rifle.

These attitudes remain ingrained in American some 200 years later - epitomized by the American moviegoer's adolescent taste in movies in general (Beavis and Butthead, anyone?) and by the fire-and-brimstone anti-sex standards of the Motion Picture Association of America's ratings board in particular.

In all my years as a movie critic, whenever a parent would contact me inquiring about a film's R rating, he/she would be concerned only about the movie's sexual content, never its violence.

Maybe that's why American movies are "frank about violence," to quote Benton, but not about sex. After 200-plus years, I don't see this changing - at least not in our lifetime.

(Artwork: Robert Benton, right, on the set of 1979'2 "Kramer Vs.Kramer" with Dustin Hoffman. That's producer Stanley Jaffe in the background)

Anyone interested in perusing some 2060 of my film reviews, dating back to 1994, can do so by simply going to RottenTomatoes.Com
Posted by joe baltake at 5:30 PM 1 comment: