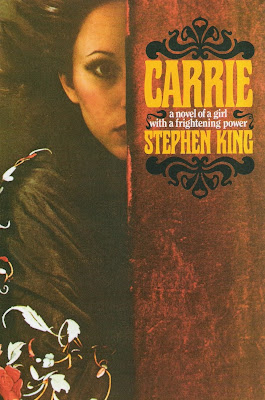 On paper,  the proposed remake of “Carrie” is nothing short of fabulous, what with Kimberly Pierce as director, Chloë Grace Moretz and Julianne Moore, as her well-cast stars, and writer Lawrence D. Cohen recruited to update the lean script that he wrote for the Brian DePalma original in 1976.

But, in execution, the completed film is something else, and part of me would like to point to Marvel Comics wunderking Roberto Aquirre-Sacasa, brought in as co-scenarist and to seemingly mess up Cohen's model script, specifically the ending. Seemingly (I hasten to stress).

Whatever the reason, a mess it is.

While DePalma’s “Carrie” is unusually painterly for a horror film, Pierce’s is blunt and, frankly, crass, qualities in full view in the film’s gross and gratuitous opening sequence – in which Margaret White (Moore) is a frantic, demented bystander to the blood-spurting birth of her own daughter, Carrie.  While Piper Laurie was almost ethereal as the religious-nut mother in the first film, poor Moore is presented as a perspiring, smelly hag. As for the gifted Moretz, she does little else here than walk around with her shoulders squeezed up to her ears.

It’s a hunched performance in more ways than one. Sissy Spacek, twice Moretz's age when she starred in the original, somehow seems years younger - a permamently, fascinatingly stunted child, if you will.

Pierce, whose first two films (1999’s “Boys Don’t Cry” and 2008’s “Stop-Loss”) I admire, may be a case of someone who was prematurely lauded by the critics.  Aside from being hardly prolific, she seems to lack a feel for the camera’s eye.  Pierce inarguably knows a solid story when she sees one and she’s a good director of actors, but she simply isn’t a filmmaker. And that’s what sets her apart from Brian DePalma who is.

And it’s what makes her film so wildly different from – and inferior to – the original.  The new “Carrie” underlines Kimberly Pierce’s few strengths as a director, as well as her major weaknesses as a filmmaker.
Posted by joe baltake at 3:14 PM 12 comments: 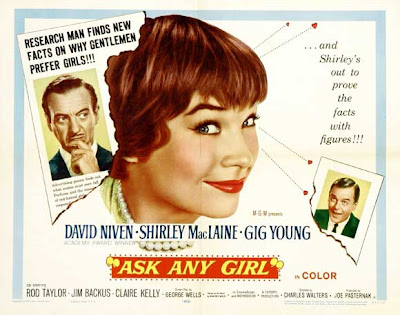 Michael Gordon's "Pillow Talk," released by Universal in October of 1959, is largely regarded as something of a first - "the fluff sex comedy," a modern subgenre of the time-tested battle-of-the-sexes romps. It was a huge hit, both a turning point in Doris Day's career and an on-going source of references for subsequent comedies trying to be just like it.

But predating it by a few months was Charles Walter's "Ask Any Girl," a working-girl lark released by Metro in May of that year. Shirley MacLaine, in a role that Day would patent, plays a career woman and romantic naif caught between two men - her bosses who also happen to be brothers. She's interested in nabbing dashing Gig Young, see, and leans on his older brother, stuffy David Niven, for pointers and guidance, not realizing that he's really the guy for her and that, in fact, he's interested.

On the sidelines is Rod Taylor, delightfully on the prowl.

"Ask Any Girl," a bit of wispy fun with a distant relationship to "Pygmalion," doesn't have the legendary reputation of "Pillow Talk." It virtually has no reputation at all and, for the most part, is almost impossible to see. But it's worth searching out, if only for the ace supporting cast - Elisabeth Fraser, Dodie Heath (fresh off "The Diary of Anne Frank"), Jim Backus, Claire Kelly, and the inimitable Carman Phillips.

There are a couple interesting connections here: MacLaine previously appeared with Niven in Michael Anderson's "Around the World in 80 Days" (1956) and with Phillips in Vincente Minnelli's "...Some Came Running" (1958). Niven would play opposite Day a year later in Walters' "Please Don't Eat the Daisies" (1960), and Young, of course, was something of a Day staple, appearing with her in Gordon Douglas' "Young at Heart" (1954), George Seaton's "Teacher's Pet" and Gene Kelly's "Tunnel of Love" (both 1958) and Delbert Mann's "That Touch of Mink" (1962).
Posted by joe baltake at 6:59 PM 5 comments:

"I don't want people to think I'm an entertainer..."

From under the desk, C.C.("Bud") Baxter (Jack Lemmon) has produced a hatbox, and out of the hatbox a black bowler, which he now puts on his head.

Bud: It's what they call the junior executive model. What do you think?

Fran (Shirley MacLaine), the elevator operator on whom Bud has a crush, looks at him blankly, absorbed in her own thoughts.

Bud (continuing): Guess I made a boo-boo, huh?

Bud: Really? You mean you wouldn't be ashamed to be seen with somebody in a hat like this?

Fran: Of course not.

Bud: Maybe if I wore it a little more to the side - (adjusting the hat) is that better?

Bud:  You don't think it's tilted a little too much.

Fran takes her compact out of her uniform pocket, opens it, hands it to Bud.

Bud (examining himself in the mirror): After all, this is a conservative firm - I don't want people to think I'm an entertainer...

His voice trails off. There is something familiar about the cracked mirror of the compact -- and the fleur-de-lis pattern on the case confirms his suspicion. Fran notices the peculiar expression on his face.

Fran: What is it?

Fran: I know. I like it this way - makes me look the way I feel.