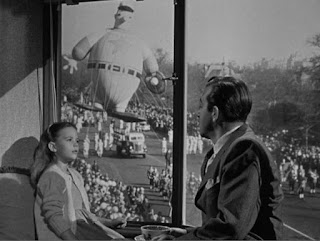 Everyone routinely mistakes George Seaton's "Miracle on 34th St." (1947), featuring a young Natalie Wood and John Payne (above) and Edmund Gwenn (below), for a Christmas movie. 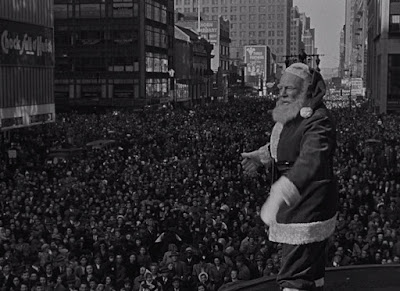 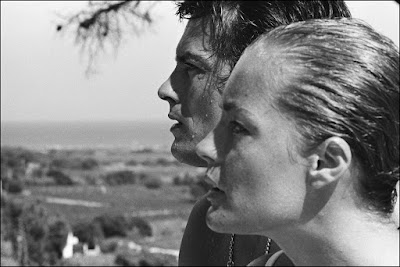 Alain Delon and Romy Schneider were the "it" couple when movie stars actually gave off some heat - and when their names weren't "cleverly" spliced together by some socially stunted journalist (read: Brangelina).

The affecting Romy passed way too young in 1982 (of cardiac arrest) and Delon has outlived her by 33 years.  He was married once - to Nathalie Delon from 1964 to 1969 - but only once.  His relationship with Romy both predated his marriage and followed it.  She died; he never married again.

tonight at 8. center orchestra. two on the aisle.

Turner airs "the best damn musical!" this evening.  Can't wait.  It is possibly my all-time favorite film (as anyone who follows this site surely already knows).  Two items on my wish list, however.

First, I hope that Robert (or Ben, or whoever introduces "Gypsy" tonight) doesn’t remind us for the 1,438th time that the role of Madam Rose was written for Ethel Merman.  (We know already. Besides, Roz rules.)  And, two, that the character isn't referred to - for the 1,439th time - as "Mama Rose."  She isn't called that in either the play or the film (as author Arthur Laurents kept reminding people).  She's called Rose, Madam Rose and Mama.

But never Mama Rose.  Never. That said, bring on Caroline!
Posted by joe baltake at 9:30 AM 11 comments: 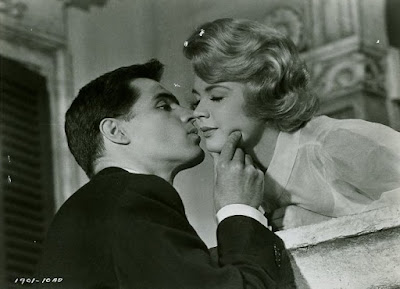 Ignored by its distributor, Universal Pictures, for almost five dacades now, "Romanoff and Juliet" is Peter Ustinov's Cold War satire that playfully juxtaposes the familiar Shakepeare plot with the political atmosphere that was simmering in 1961. To the best of my knowledge, it has never been available on home entertainment in any form and I can't recall the last time it was televised. I'm guessing forty years at least.

Sandra Dee and John Gavin (above), who also teamed the same year in Henry Levin's "Tammy, Tell Me True" (also for Universal), play the title characters - he being the son of the Soviet Ambassador to Concordia and she the daughter of his American counterpart. Ustinov essays the role of the leader of Concordia, virtually playing it drunk, and makes a most disarmimg cupid for Romanoff and Juliet. 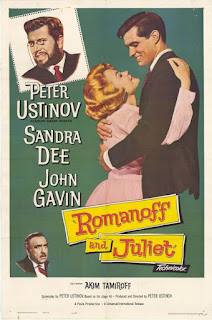 The 1958 play which Ustinov wrote and on which his film was based was directed by none-other-than George S. Kaufman and included incidental music by Harold Rome ("Fanny") with lyrics written by Ustinov and ... Anthony Hopkins. Elizabeth Allen played Juliet and Edward Atienza played Romanoff. Ustinov recreated his original Broadway role for the film.