Michael Winterbottom's "A Mighty Heart" - based on Mariane Pearl's book about the brutal death of her journalist-husband Daniel and her willful ability to cope with this loss - is a smart, tough film, as one would expect from any politically-driven movie from this uncompromising director. And as Mariane, Angelina Jolie impressively abandons herself in a committed, vanity-free performance. 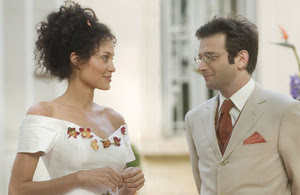 But there's a hole at the center of this otherwise convicing polemic: Daniel Pearl himself is virtually missing and, by extention, so is the connection that would pull in an audience. While the talented Dan Futterman is well-cast as Pearl and effective in his few brief, fleeting scenes, there simply isn't enough of him.

This is a crucial flaw that reviews have inexplicably overlooked.

His Daniel Pearl is a ghost even at the beginning of the movie, a conceit which could have been intentional on Winterbottom's part. Nevertheless, it seriously constrains his film. "A Mighty Heart" is in desperate need of more exposition wherein we'd get to know Pearl and what drives him and, consequently, feel some empathy for him before he is abducted and beheaded.

Without these early scenes, we're left with an impassioned, tightly-coiled film that somehow leaves one cold.

Anyone interested in perusing some 2060 of my film reviews, dating back to 1994, can do so by simply going to RottenTomatoes.Com
Posted by joe baltake at 6:56 PM 1 comment:

So was the shared fate to two star-heavy flicks that caught my attention - belatedly - this week.

2005's "The Big White," directed by someone named Mark Mylod, stars Robin Williams, Holly Hunter, Woody Harrelson, Giovanni Ribisi, Tim Blake Nelson and Alison Lohman. It plays on The Movie Channel (TMC) on July 14 and 22. Is that a premiere?

I won't burden you with a synopsis for either film because, with those lists of players, who cares?

One more question: Exactly how bad could these two be not to have been released?

For the record, it's a remake of Leonard Kastle's cult fave, "The Honeymoon Killers."

The death of the wonderful French actor, Jean-Claude Brialy, at age 74 on Wednesday in Paris is yet another reminder of how we're losing a little bit of the French film community every day.

It's been said that American stars aren't what they used to be - that, as Davis, Hepburn, Bogart, Fonda and Brando have passed on, there is no one who has truly replaced them. This sense of urgency and panic is even more acute in France.

I became aware of it when Jean Gabin died. That was the end of a great era in French filmmaking, I thought. Matters got more desperate when Yves Montand and Simone Signoret passed, but I was comforted by the fact that we still had relative newcomers Gerard Depardieu and Catherine Deneuve.

While someone like Patrick Deware died young, there was Isabelle Huppert, his contemporary, who has prevailed. 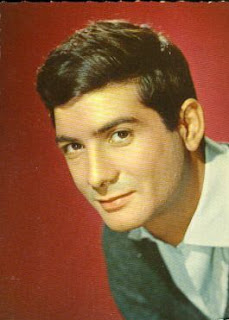 But each year, I become aware that few new French stars have emerged and when someone as valuable as Brialy passes, there's the feeling that something important is being lost. Depardieu and Deneuve are still active, Jeanne Moreau pops up occasionally, but Jean-Louis Trintignat hasn't sparkled in years.

And where is the unique and indispensible Bernadette Lafont? Michel Piccoli? I miss you, Delphine Seyrig! R.I.P. 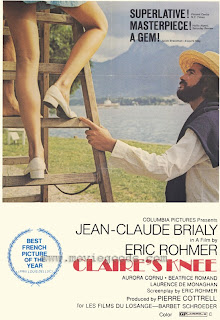 No, the New Wave isn't new anymore. It isn't even old.

It doesn't even exist.

But, for now, let's reflect on its greatness, and Jean-Claude Brialy's place in it.

Anyone interested in perusing some 2060 of my film reviews, dating back to 1994, can do so by simply going to RottenTomatoes.Com
Posted by joe baltake at 4:49 PM 3 comments: