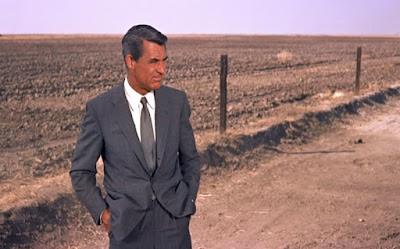 We've reached that time of year when thoughts turn to everything Oscar, including the usual, interchangeable stories about the greats who have been slighted.  Alfred Hitchcock's name is the one most invoked.

Rarely mentioned is Cary Grant for his star performance in Hithcock's "North by Northwest," the titanic supporting structure of that classic.

Eva Marie Saint and Martin Landau, the two major surviving members of the "North by Northwest" company, have participated in several Q-&-As about the 1959 film in recent years and the major focus of their discussions is invariably - and not surprisingly - its legendary director. 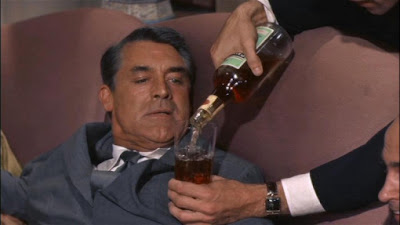 Makes sense, right?  Hitchcock, my favorite filmmaker (hands-down), is inarguably the auteur of "North by Northwest."  But wait!  Hold on.

His star is clearly his equal - much more so than any other actor or actress who has appeared in a Hitchcock film. Cary Grant is an invaluable, indispensable element  of "North by Northwest" as public relations mogul Roger O. Thornhill ("The O. stands for nothing"), aka "George Kaplan." 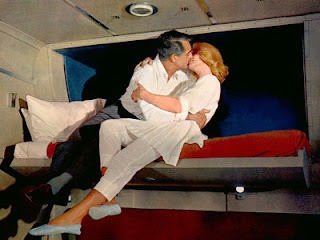 It's never been observed but, except for one brief sequence, Grant is in every scene, nearly every frame, of "North by Northwest," starting with the opening he shares with Doreen Lang (playing his secretary) and ending with the upper-berth clinch with Saint. Every scene but ... one.  Any guesses which one.  (See note below for the answer.)

Anyway, it's a towering, neglected performance that should shame the self-important Academy of Motion Picture Arts and Sciences (talk about a mouthful) which, almost thoughtlessly (and recklessly), hands its much-coveted golden statues to lesser performances that fade quickly.

So, I hope that in future interviews, Saint and Landau remember to acknowledge Grant's crucial contribution to "North by Northwest."

That said, there are two bits of trivia that have escaped even the film's most ardent fans.  And, no, I'm not referring to Hitch's usual cameo or the fact that the delightful Jessie Royce Landis was only seven years older than her screen son, Grant, when they made the film. 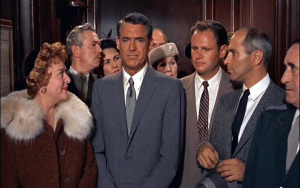 In the shot prior to Hitch's cameo (missing a bus), there are two women arguing over who has the right to a taxi.  One of the women is Alma, Hitchcock's wife. Another amusing bit has the melody, "It's a Most Unusual Day," being piped into the lobby as Grant enters the Plaza Hotel. Yes, it turns out to be a most unusual day as his character is mistaken by James Mason's thugs for one "George Kaplan." 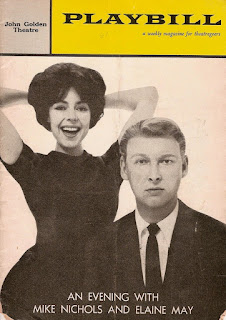 A witty, clever touch by Hitch.

Notes in Passing: The only "North by Northwest" scene in which Grant doesn't appear is the one featuring Leo G. Carroll, Madge Kennedy and their fellow government operatives discussing the situation involving ...

Also in a skit titled "Telephone" in their 1960 Broadway revue, "An Evening with Mike Nichols and Elaine May," the acerbic comics reference "North by Northwest" (which was released a year earlier) by invoking the name "George Kaplan" repeatedly - and hilariously - as a running joke:

The line is read by May who, as an officious Bell Telephone operator, affects nasal vocal inflections. Again, hilariously.

Full Disclosure:  One of my favorite interviews was with Eva Marie Saint who came to Philadelphia in either the late 1970s or early '80s in a play directed by her husband, Jeffrey Hayden.  I can't recall anything about the show, not even its title, except that her co-star was Ronny Cox.

She was a terrific interview. 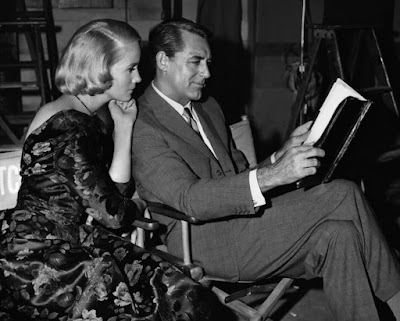 Hear! Hear! Thanks, Joe. A great, neglected performance and, yes, Grant is as important to NbyNW as Hitch. It is as much "a Cary grant film" as it is "an Alfred Hitchcock production."

This film is unthinkable without Cary Grant. He's absolutely a-mazing in it!

The joy of settling into long ago movies is the delightful memories and pure escapism. A favorite favorite I remember discovering in my 20s is Cary Grant’s angel in The Bishop’s Wife. He is absolutely believable as an angel, human yet above human. Wonderful! A seemingly effortless portrayal. He really was one of the greatest “greats” who brought zing and verve and wit to all of his roles. Cannot imagine that Hollywood didn’t recognize his towering talent.

Seeing it regularly on TCM always reminds me how very clever it is. And makes me want to see Mount Rushmore in person!

Great articles on NORTH BY NORTHWEST! Thank you. Marilyn

Absolutely, Cary deserved Oscar. This film is SO great!
Can't say I 've ever heard that Alma Hitchcock can be seen near start of film. I checked frame blow-ups on the Hitchcock Zone site and I dont see her in that taxi shot, or any of the frames near it. It would have been great if she had been in a shot.

Sorry. I thought I had added a comment. Definitely agree Cary deserved recognition. He WAS that picture!
Can't see any evidence of Mrs. Hitchcock in that scene you mentioned.