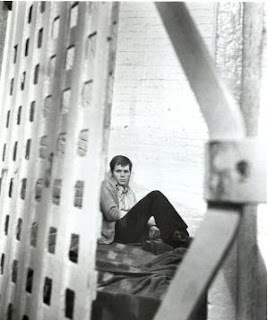 Aficionados of the unapologetically harsh HBO series, "Oz," may be under the impression that Tom Fantana's creation was mining something new in its uncensored depiction of the homoerotic tensions that seemingly permeate every inch of the prison system.

But the fact is, John Herbert's play, "Fortune and Men's Eyes," produced in the late '60s, got there first, and Harvey Hart's extremely faithful 1971 film version took the piece one step further, depicting things that eluded the constraints of the stage. Herbert's title is taken from a Shakespearean poem entitled "When in disgrace with fortune and men's eyes".

As up-to-date as the material was - and is (even with the passage of time) - the plot of "Fortune and Men's Eyes" is simplistic, almost following a forumula. Call it Prison Film 101. In it, an innocent - the naïve Smitty (Wendell Burton, that's him in the photo, caged) - lands in jail for six months for possessing drugs and is immediately exposed to the horrors of the place. The familiar denizens are all there - the brooding, quick-trigger Rocky (Zooey Hall), the sensitive, sonnet-spouting gay man Mona (Danny Freedman) and the more flamboyant Queenie (Michael Greer, the Rupert Everett of his day), whose name says it all.

Rocky offers Smitty his "protection" - but for a price. The sequence in which Rocky rapes Smitty, in seemingly real time, in the showers was a cause celebré in its day and probably still packs a punch. That's if you can see the film. Which you can't.

I'm not sure who staged that sequence. The film's original director, Jules Schwerin, was replaced nine weeks into the shoot by Harvey Hart ("The Sweet Ride" and "Bus Riley's Back in Town").

The cast is exemplary. Greer, one of the original actors in the Los Angeles stage production of the play (which starred Don Johnson and was directed by Sal Mineo) is postively electric. And whatever happened to him anyway? Both Burton and Hall, who also disappeared, were fresh late '60s faces at the time, both having made their movie debuts in 1969 - Burton opposite Liza Minnelli in Alan J. Pakula's debut movie, "The Sterile Cuckoo," and Hall in a crucial yet curiously uncredited performance in Gordon Parks' debut movie, the autobiographical "The Learning Tree."

The film, incidentally, is a French Canadian production and, in its homeland, was known as "Aux yeux du sort et des humains."
Posted by joe baltake at 12:30 PM 6 comments: 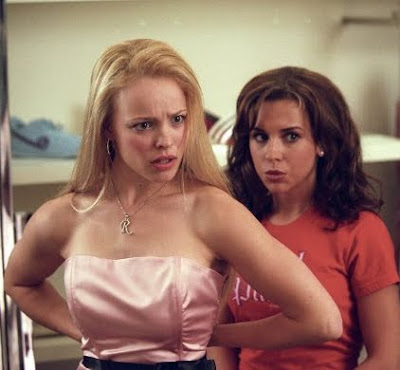 Gretchen Weiners: "That is so fetch!"

Regina George: "Gretchen, stop trying to make 'fetch' happen! It's so not going to happen!"

Rachel McAdams as the alpha mean girl of The Plastics setting Lacey Chabert straight on her phraseology in Mark Waters' delightful teen comedy.
Posted by joe baltake at 7:56 PM 3 comments: