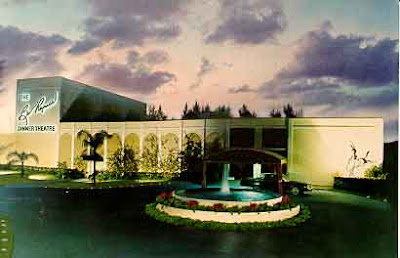 In the immediate previous post on Farrah Fawcett, I refer to The Burt Reynolds Dinner Theatre, a venue that deserves a bit of elaboration.

Located in Reynolds' hometown of Jupiter, Florida, the theatre was something of an unsung gem that opened in 1979, attracting high-profile performers in productions both new and tested duering most of the '80s.

Reynolds himself starred in several productions there - with Carol Burnett in Bernard Slade's "Same Time, Next Year" and with his then-love Sally Field in N. Richard Nash's "The Rainmaker."

Reynolds also acted with Stockard Channing in an Ernest Thompson one-act piece called "Twinkle, Twinkle" that was one-third of a trilogy known under the umbrella title "Answers." The other two titles by Thompson ("On Golden Pond") were "The Constituent," with Charles Durning and Ned Beatty, two frequent Reynolds co-stars on screen, and "A Good Time," featuring the then-married Kirstie Alley and Parker Stevenson.

The theatre closed its doors in 1997 after Reynolds declared bankruptcy in 1996 - a nice idea that deserved a longer run.

Note in Passing: I don't know about you, but writing about Burt and Farrah brings Rona Barrett to mind for some reason.
Posted by joe baltake at 9:13 PM

I would have loved to have seen Vincent Gardenia as Willy Lohman.

I often think that Burt Reynolds is one of the "stars" that I miss the most. Especially in the late 70s and early 80's, when it was Burt, Sally Field, Dom Deluise, Charles Durning, etc.

The films may not have been great art, but they were "fun". I mean, I'd rather see even CANNONBALL RUN 2 again over any of the OCEANS films.

The dinner theatre looks like it must have been a great place to visit.

Burt would have been terrific in "The Rainmaker." As far as I can remember, Stanley Kauffman at The New Republic was the only major critic who recognized that Burt in his prime was a very good actor, in addition to being a genuine star. I wonder how different his career would have been had he gotten the critical respect I think he deserved.

Actually, Burt received a lot of critical support when he was at his height as a star. Molly Haskell loved him, for example. I never quite understood why he complained so often to Johnny Carson about how he was mistreated by the critics. Exactly what reviews was he reading?

Ah - I'm happy to hear that about olly, since she's such a good critic. Maybe Burt was thinking in particular about Pauline Kael - the two of them seem to go together like angora and over-alls.