Now is the time to praise Morton DaCosta. This hugely underrated made only three films but two of them are widescreen classics.

A successful stage director, DaCosta had a string of Broadway hits under his belt  (including "No Time for Sergeants" and "Plain and Fancy") when he made his film debut with the movie version of one of them, 1958's "Auntie Mame," headed by its original stage star, Rosalind Russell, whom DaCosta astutely surrounded with a superb supporting ensemble. 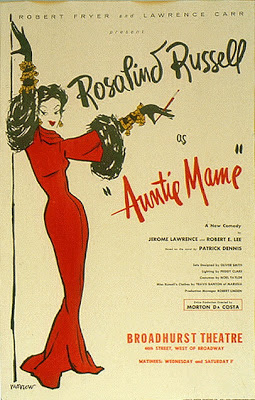 DaCosta had a keen eye for casting, not surprising given that he started his theatrical career as an actor himself, and, for this occasion, he corralled the inimitable Coral Browne, Forrest Tucker (whom DaCosta had directed in a stage production of "The Music Man," also in 1958, the year "Mame" was release), a priceless Connie Gilchrist, Patric Knowles (one of Russell's occasional co-stars from the '40s), Fred Clark, Willard Waterman, Lee Patrick, Pippa Scott, Joanna Barnes, Robin Hughes, Carol Veazie, Henry Brandon, Yuki Shimoda, Brook Byron,  the venerable Margaret Dumont and Dub Taylor (in brief bits), a very young Roger Smith and, from the play, Peggy Cass and child actor Jan Handzlik.

There isn't a bad performance among them, evidence that DaCosta was an excellent director of actors.  And that would even include DaCosta himself:  He provided the deeply resonant voice of Edwin Dennis, whose reading of his Last Will and Testament opens the film.

Four years later, in 1962, DaCosta would direct his second film, based on another of his Broadway hits - the Meredith Willson musical, "The Music Man," again headlined by its original star, Robert Preston.

"The Music Man" and "Auntie Mame" each received best picture Oscar nominations in their respective years, but DaCosta was overlooked both years in the director category (although as the producer of  "The Music Man," he received a nomination by extension).

For the life of me, I can't explain why he was snubbed both times, considering that his work on each one is nothing short of masterful - each film a tightrope balancing act:  He was cognizant and respectful of the stage source of those works (artfully using the "black out" device to close certain scenes in both films), while also embracing them with a distinct cinematic flair.  I'm sure much of his success as a director of these two pieces, as well as his command of the vast Technirama proces, is based on his close collaboration with his cinematographers - Harry Stradling on "Auntie Mame" and Robert Burks on "The Music Man."

DaCosta was born Morton Tecosky in Philadelphia on March  7, 1914 and went by the nickname tec.  (That's his signature above.)  He was of Lithuanian descent, which helps explain the two Lithuanian jokes that he sly slipped into the films of "Auntie Mame" and "The Music Man" (jokes that were nowhere to be found in the stage versions).

In the opening party sequence of "Auntie Mame," Mame is introducing her nephew Patrick to some of her guests when a man with a long beard and dressed entirely in black Eastern Orthodox liturgical garments walks up.

Mame: "Oh, that's a Lithuanian bishop, darling.  Doesn't speak a work of English. Stimulating man!" (to the bishop) "Your grace." (back to Patrick) "Why, he's such a darling!  And so worldly for a man of God."

And in "The Music Man," when Mayor Shinn's acolytes successfully capture Tommy Djilas, the kid who put a firecracker under Mrs. Shinn at the Fourth of July celebration, the following comments are made.

Mayor Shinn: "Grab that hoodlum!  He almost blew up Mrs. Shinn." (to Tommy)  "You wild kid, ya!  Hanging around my oldest girl." (to Professor Harold Hill) "His father is one of those Lithuanians from the south side of town." (back to Tommy) "You wild kid, ya!" 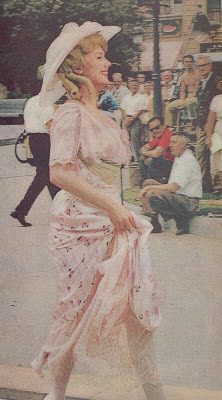 Anyway, after making these two very lavish, high-profile films, DaCosta scaled back for his next - the modest, amiabe but ultimately disposable caper/gangster flick "Island of Love," starring Preston, Tony Randall and Walter Matthau.  This one was not based on Broadway material from his past. It sailed in and out of theaters under the radar - and DaCosta subsequently sailed away from movies. For good.

Following Saturday night's screening of "Auntie Mame" on Turner, host Robert Osborne commented to Drew Barrymore that he found it unfathomable that DaCosta never made another film.

One could speculate, perhaps, that Hollywood considered him an outsider, an animal of the theater.  Or to blame, as is my wont, snotty cinèastes who never gave him his due. But the explanation is really less complicated than that.

DaCosta simply prefered the stage and returned to it.

He went on to direct Judy Holliday in "Hot Spot," Shirley Jones (his "Music Man" leading lady) and husband Jack Cassidy in "Maggie Flynn," Kier Dullea and Ron Liebman in "Doubles," Howard Keel and Carol Lawrence in "Saratoga" (based on the Edna Ferber book and the 1945 film with Gary Cooper and Ingrid Bergman), and George Sanders and Delores Gray in "Sherry!" (the musical version of "The Man Who Came to Dinner"), among others. Not all of these were successful; many weren't.

Tec died of heart failure on January 26, 1989 in Redding, Connecticutt.

Notes in Passing: I hasten to add that, although Broadway types wish otherwise, it was "The Music Man," and not "West Side Story," that won the 1957 Tony Award for best new musical.  Despite WSS's major score and cutting-edge choreography, its cringe-inducing book and dialogue undermine those notable accompishments.  "The Music Man" is an all-around superior musical.  It's also aged better.  Much better.

And many thanks to Lisa Delman for sharing invaluable information about her uncle.