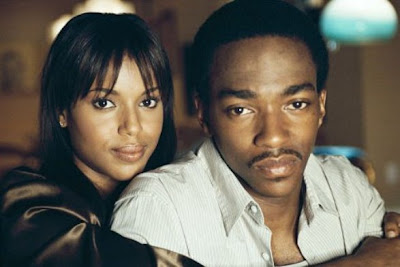 The auspiciously talented Anthony Mackie, with Kerry Washington, in the red-hot role that should have made him a hot star - as the Red Bull-gulping stud/babymaker in Spike Lee's "She Hate Me."

Anthony Mackie is one of those actors who seems to operate on the periphery - someone who you catch out of the corner of your eye.

But once you catch him, you can't take your eyes off him.

In a word, he's riveting. He's impossible to shake.

Case in point: Ryan Fleck's "Half-Nelson" (2006) is Ryan Gosling's film - except when Mackie is on screen giving him a hard time. Crowding Ryan Gosling off the screen is no easy task, but Mackie did it. And not in any underhanded, scene-stealing way. He simply inhabited his character. 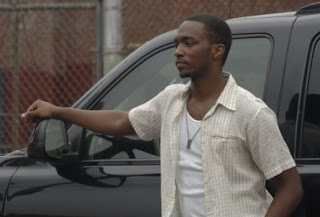 More recently, he did the same thing in Tim Disney's affecting
"American Violet" (2008). Mackie has one scene (albeit a major one) and no screen credit (inexplicably). Yet, the movie is his.

Mackie in "Half-Nelson": Another easy theft

By my count, this charismatic, talented actor should have become a major star five years ago - in Spike Lee's compelling "She Hate Me" (2004) - but the film itself is (how shall I put this?) slightly audience-alienating. Before there was "Hung," there was "She Hate Me," in which Mackie plays a game guy who goes into the business of impregnating women - with the help of erectile-inducing drugs and steady shots of Red Bull. You either loved or hated the film; you either loved or hated Mackie. No matter how one feels about "She Hate Me," it's a singular film and Mackie's is a singular performance - both still waiting to be discovered.

Anthony Mackie is now back, ready to give us one more chance, in Kathryn Bigelow's powerful and provocative modern war drama, "The Hurt Locker" - again, a film that ostensibly belongs to its top-billed star, the talented Jeremy Renner, who plays a sergeant who is a gung-ho war enthusiast ready to play a form of Russian roulette with himself, but which Anthony Mackie quietly, handily, steals as another sergeant who is more grounded and who is tested by his buddy's dangerous sense of bravura.

Another great performance. One that should make Anthony Mackie a star. 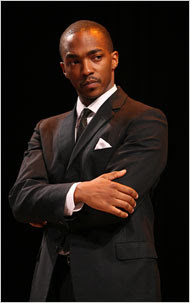 Note in Passing: Mackie will be in New York this summer, as a member of the cast of the Public Theater’s Shakespeare in the Park production of “The Bacchae.” He will portray the role of Pentheus in the play; the previously announced cast for “The Bacchae” includes Jonathan Groff and André De Shields. “The Bacchae” is to be directed by JoAnne Akalaitis with original music by Philip Glass and translation by Nicholas Rudall. It begins previews at the Delacorte Theater in Central Park on August 11, opens August 24 and concludes its run on August 30.
Posted by joe baltake at 3:10 PM