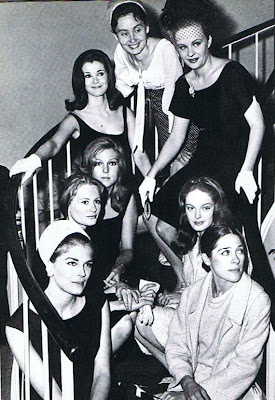 Arguably Sidney Lumet's biggest, least representative and least remembered film is his 1966, 150-minute version of the Mary McCarthy novel about eight Vassar women who are alternately friends and rivals - or "frenemies," as Carrie Bradshaw would put it more than 30 years later.

Yes, "The Group" - which Turner Movie Classics is airing today at 3:30 p.m. (est) as part of its Lumet tribute - is one of those films indirectly responsible for "Sex and the City's" toxic reign of terror.

It represents a subgenre which includes Jean Negulesco's deliciously camp "The Best of Everything" (1959) and Wendy Wasserstein's intelligent "Uncommon Women and Others" (1979) - a subgenre that apparently has been dumbed-down over the past 40 years.

Hence, "Sex and the City's" insipid preoccupation with expensive shoes, obedient men and very little else.

The brightest star of Lumet's ensemble of young women is Shirley Knight, already a double-Oscar nominee by '66, although Candice Bergen received more attention for her arch, cringe-worthy debut as the token lesbian of the bunch. (She can barely walk and talk at the same time, as one of her ungenerous co-stars put it at the time.) Joan Hackett and Elizabeth Hartman, both now gone, and Joanna Pettet and Jessica Walter, would go on to bigger and better roles, although Pettet would soon fade away; Kathleen Widdows would move on to daytime dramas, becoming a favorite of soap fans, and Mary-Robin Redd, the most affecting actress of the group, would return to her roots, the Broadway stage.

The male characters in this difficult-to-see film, all singularly unappealing, are represented by Richard Mulligan, Larry Hagman, James Broderick and Hal Holbrook, none of whom would past muster on "Sex and the City."

Not enough musculature among them, see?

Given that I've talked up Alfred Hitchcock's "Marnie" (being aired today at 1:15 p.m., est, by Turner Classic Movies) ad nauseum, I'm turning this space over to Richard Brody, the esteemed movie-listings editor for The New Yorker magazine and the author of “Everything Is Cinema: The Working Life of Jean-Luc Godard.”

In the May 18th issue, Brody had this to say about Hitch's minor masterpiece, when it was screened recently at BAM in New York as part of a program devoted to late-career films by major directors:

"Tippi Hedren’s cool grace in 'The Birds' hardly prepares a viewer for her porcelain froideur as a sexually traumatized kleptomaniac in Alfred Hitchcock’s psychologically resonant, visually transcendent film, from 1964. Sean Connery co-stars as a businessman who hires Marnie as his secretary, lusts mightily after her, and, catching her with a hand in his till, takes it upon himself to win her heart—and, above all, her body—by healing her mind. Borrowing liberally from himself (notably, several tropes from 'Spellbound,' 'Vertigo,' and 'Psycho'), Hitchcock gives his obsessions luridly free rein—intentionally and not. He was, in fact, obsessed with Hedren, whose rejections he repaid with harsh treatment, and it shows in his images: few films have looked as longingly and as relentlessly at a woman, few onscreen gazes at an actress have so perfectly crystallized an integral and unique style of performance, and few performances have so precisely defined a director’s world view, even unto the vanishing point. He could, and did, go no further."
Posted by joe baltake at 12:15 PM 2 comments: 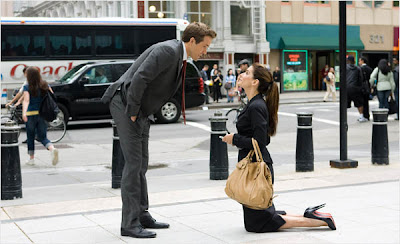 "We're happy to announce the arrival of..."

"Dan in Real Life" and "The Family Stone"

are happy to announce

the birth of their child,

The proud grandparents are

"Meet the Fockers" and "The Wedding Crashers."

Present at the birth

was a great-grandparent, "Meet the Parents,"

including "Pieces of April" and "Four Christmases"

and just about every other preditable film comedy about a zany weekend spent at the lavish home of a dysfunctional but charming American family. 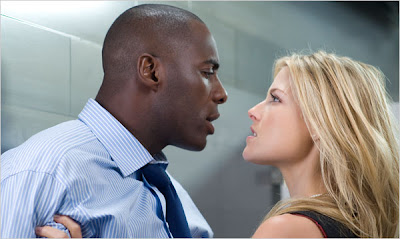 I caught up with Steve Shill's "Obsessed" belatedly.

It opened in April - to predictably dismissive reviews - but kept hanging in there at my local cineplex. What I encountered was a tight, taut, feisty bit of psychosexual fun. Yes, it is very much derivative of "Fatal Attraction" -and, by extension, "The Temp" - but then those films owe a great deal to "Play 'Misty' For Me." And, perhaps for that reason, "Obsessed" was hastily bushed aside by critics who think they have much more important titles to analyze. Not that anyone listens to critics anymore.

The fact is, movies are parasitic. They live off one another. And "Obsessed" does it well. Very well. It is infinitely superior to "Fatal Attraction," largely because Glenn Close isn't in it. (Wait! I like Glenn Close. I really do. Just not in that film. Funny how so awful a character in so awful a film turned her into a temporary bankable star. Go figure.)

Shill adds a racial element to the mix but his film is never racist, something which his game cast - Beyoncé Knowles, as the seemingly betrayed wife; the very good Idris Elba, as her husband, a good man who has been set up, and especially Ali Larter, as the psycho diva who just can't get enough - clearly gets. They are all highly companionable.

The film's big setpiece is a showdown between Knowles and Larter, but the real star here is ace editor Paul Seydor (Ron Shelton's house editor) who works with, rather than against, the movement of the sequence.

"Obsessed" is gone, but when it materializes on DVD (with extras!), check it out. I've no idea who Steve Shill is, but I look forward to his next movie.

Note in Passing: A bonus here is Christine Lahti, a pleasing presence seen too infrequently on screen, as a borderline inept police detective which Lahti plays with a straight face. Get this woman back in movies.