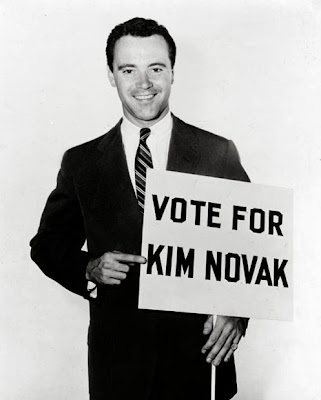 At long last, Turner Classic Movies showcases Kim Novak as its Star of the Month, starting tonight @ 8 p.m. (est) with a repeat of Robert Osborne's recent sit-down with the enigmatic star, an excellent Q-&-A session in which Novak proves, as she invoked in her final line in Quine's "Bell, Book & Candle" ('58), that "I'm only human."  No, there's no star turn here.

Novak was Columbia's atypical answer to Fox's resident blonde, Marilyn - atypical in that Novak was always rather remote and reserved, compared to Monroe's playfulness, and her blondness wasn't fixed but often morphed from color to color, ranging from stark white ("The Eddie Duchin Story") to something resembling smoke ("Bell, Book & Candle").

Like Monroe, Novak had a relatively brief film career, but of her own accord, and she worked with some fascinating filmmakers - Hitchcock, Preminger,  Quine, Wilder, Logan, Medak, Figgis, Hemmings.


The 16 titles selected by Turner provide a good glimpse of her often unnoticed versatility, but conspicuously missing are her haunting work in Quine's "Strangers When We Meet" ('60) and her game take on Doris Day in Gordon's "Boys' Night Out" ('62).  Hitchcock's "Vertigo" ('58) is, of course, the pick of the litter, but this time out, pay close heed to her palpable melancholy in Sidney's wrenchingly funereal "The Eddie Duchin Story" ('56) and her perfect duet with Jack Lemmon (that's him above paying homage) in Quine's faux Hitchcock romp, "The Notorious Landlady," ('62), masterfully written by Blake Edwards and Larry Gelbart. 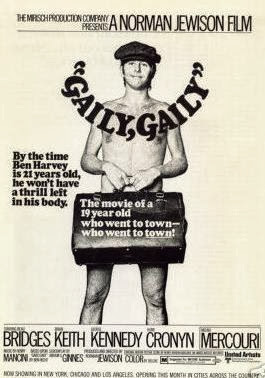 Based on Ben Hecht's autobiographical novel (in which he named himself Ben Harvey), the endearing "Gaily, Gaily" was supposed to be a huge year-end hit for United Artists, director Norman Jewison and star Beau Bridges in 1969.  It was designed as a big Christmas pic with Oscar pretentions. Sadly, it didn't turn out that way.

Perhaps the best piece of Americana produced by a Canadian filmmaker, "Gaily, Gaily" was a willfully old-fashioned entertainment that had the misfortune to be released smack-dab in the middle of the New Wave of American filmmaking.  Audiences - and critics - who had lost their cherries to "Midnight Cowboy" and "Where's Poppa?" (both also from U.A.) greeted "Gaily, Gaily" with smug indifference.  It was viewed as corn/cornpone, something decidedly square,  and, as the song goes, "How you gonna keep them down on the farm after they've seen Paree?"

You can't. Audiences stayed away.

Jewison had scored an Oscar-style bullseye with "In the Heat of the Night" and was rewarded with a bigger budget. "Gaily, Gaily" was made on the scale of an old roadshow film.  Bridges, after a stint doing TV, attracted at lot of attention with his break-out role in "For the Love of Ivy" and was considered the Next.  Big.  Thing.  So Jewison nabbed him for both "Gaily, Gaily" and his next film for U.A., "The Landlord," based on the Kristin Hunter novel.  Also, Bridges sort of resembled Jewison and I'd like to think that Jewison was so entranced by Hecht's novel that he wanted the young hero to look like him.  Just a thought.

Jewison never got to direct "The Landlord."  By then, he was deep in pre-production on "Fiddler on the Roof," another year-end prestige/Oscar holiday film.  Instead, he turned the project over to his house editor, Hal Ashby, who made a most auspicious directorial debut.  Rumor has it that Bridges was the original choice to play Oliver in "Love Story," but turned it down in order to honor his committment to "The Landlord." 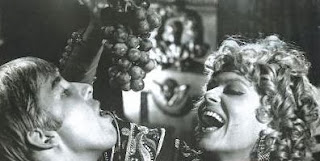 In terms of art, it was a wise and honorable move.  In terms of commerce, however, it was a disaster.  "Love Story" went on to be a bigger hit than it should have been, while it took decades for "The Landlord" to earn the respect and admiration that it eventually received.

Essentially a series of breezy skits set in 1920s Chicago and its earthy newspaper culture, "Gaily, Gaily" is driven by the apparent love for the material and the city that Jewison and his scenarist Abram S. Ginnes share with Hecht.  It basically consists of a lot of colorful characters banging and bumping into each other and slamming their way in and out of rooms and newsrooms. Bridges plays Hecht/Harvey as a young would-be writer aching to be a reporter, who is taken under wing by Melina Mercouri's brothel madam (Queen Lil is her name and she is) and by the invaluable Brian Keith as a star columnist who becomes Ben's mentor and bad example (Francis Sullivan is his name and he's as Irish as he sounds).  This may have been Keith's best film role, and few scenes are as memorable as when Keith grabs on to a disreputable doctor (Charles Tyner) and, as Pauline Kael pointed out in her review of "Gaily, Gaily," shouts, "You quack!"  It's worth sitting through the movie just to hear that.

Also, this was the film in which Margot Kidder (Jewison's fellow Canadian) made her debut - as an innocent young prostitute, natch

Tom Peters has a small but indelible bit as Carl Sandburg who attends one of Queen Lil's soriee's and regales everyone with a rough draft of his poem, "Chicago":

"Hog Butcher for the World,
Tool Maker, Stacker of Wheat,
Player with Railroads and the Nation's Freight Handler;
Stormy, husky, brawling,
City of the Big Shoulders..."

Note in Passing:  Released concurrently with "Gaily, Gaily" was another big year-end production set during the same time period - Mark Rydell's "The Reivers."  Unlike "Gaily, Gaily," however, Rydell's film was a hit and is still fondly remembered.  Of course, the difference is, "The Reivers" had a major star in the lead - Steve McQueen. 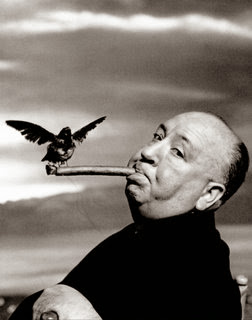 It's called Sundays with Hitch and it's on Turner Classic Movies all month, starting today.  43 titles in all.  Knock yourself out. Say no more.