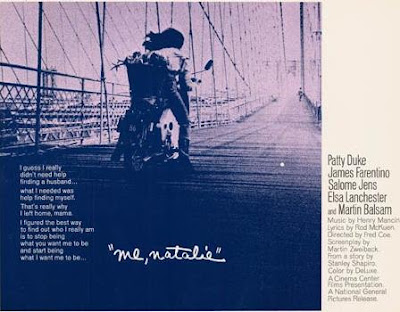 The sad passing Patty Duke brings to mind a lost film that is, arguably, her best movie, one that made the most of her potential and promise.

Fred Coe's "Me, Natalie" (1969) was something that should have rehabilitated her professional reputation after the disaster of Mark Robson's "Valley of the Dolls" (1967) but didn't. Too bad. The film is a minor gem and Duke tears into her role of an ugly duckling with the kind of passion that almost always wins Oscars - or is supposed to.

But she did receive a well-deserved Golden Globe for her affecting performance.

She plays Natalie Miller, a girl with what she perceives to be a nose problem. Her nose isn't big, but it does have a hump. (Duke initially wears a prosthetic nose and teeth created by Dick Smith in the film.) And this, she believes, is the source of all her problems, her self-deprecating humor and her general discontent. When she moves out of her parents' home and into her own apartment, Natalie finally comes into her own. 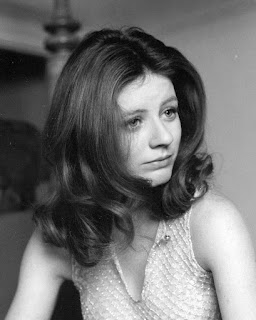 For one thing, she meets James Farentino's handsome David, whose attention gives her the confidence she needs but whose presence creates a different set of problems. Farentino, a hugely underrated actor, is effortlessly dashing as a guy who seems too good to be true - and who, sadly, actually is.

Surrounding Duke is a stellar New York cast - Nancy Marchand and Phil Sterling as her doting, clueless parents; Martin Balsam as her understanding uncle; Solome Jens as Natalie's co-worker at a club questionably called the Topless Bottom Club; Elsa Lanchester as her eccentric landlady; then-newcomers Bob Balaban, Catherine Burns and Deborah Winters as assorted denizens in Natalie's universe, and for all you trivia freaks out there, Al Pacino entirely memorably in his first film role (and single scene) as a charismatic, hyper jerk who toys with Natalie. The cad.

"Me, Natalie" was produced by Stanley Shapiro who wrote a couple of Doris Day's popular '60s comedies and who also came up with the story here, fleshed out by scenarist A. Martin Zweiback.

Director Coe, meanwhile, was noted largely as a Broadway producer - he oversaw Anne Bancroft and Duke on stage in "The Miracle Worker" (and Bancroft in "Two for the Seesaw") and produced the 1962 film version of "Worker," again directed by Arthur Penn. But he actually began his professional life as a television director-producer in the late 1940s and throughout the '50s and is beloved for the classic "Mr. Peepers" TV series. 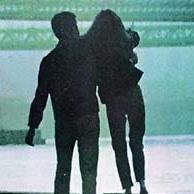 Coe made an auspicious movie directing debut in 1965 with "A Thousand Clowns," followed by "Me, Natalie." He also directed the 1971 TV movie version of  "All the Way Home," based on Tad Mosel's play (by way of the James Agee novel) that he produced on Broadway.

"Me, Natalie," a Cinema Center release, remains teasingly inaccessible on home entertainment. Long missing, it took the sad news of Patty Duke to restore its fleeting pleasures to my memory.

And to remind me of the wonderful actress herself.
Posted by joe baltake at 4:00 PM 9 comments: 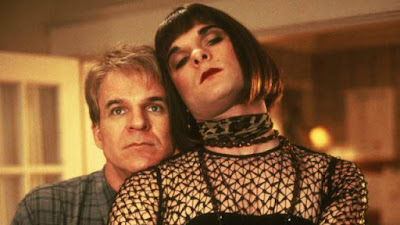 "Mixed Nuts" isn't exactly a lost film. I mean, it's available on DVD but, for more than 20 years now, this nimble comedy has been willfully ignored.

And a new HBO documentary about its maker, Nora Ephron, who passed in 2012, isn't helping matters. Ephron, largely a writer, penned 16 screenplays but directed a scant eight films, all of them pretty good in my opinion. Of those eight, only three have generated any respect from critics - "Sleepless in Seattle" (1993), "You've Got Mail" (1998) and her final title, "Julie and Julia" (2009). 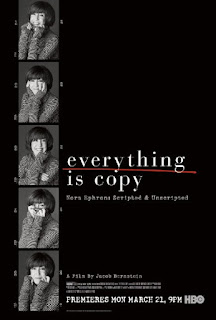 Ephron's first film, the charming "This Is My Life" (1992), is barely remembered, while "Michael" (1995), "Lucky Numbers" (2000) and "Bewitched" (2005) were all immediately dismissed. If I had to pick the least of all her movies, I would reluctantly point to "Bewitched."  But for some reason, the HBO documentary singles out the singular "Mixed Nuts" (1994) as her worst, with hardly a mention of the aforementioned three.

"Everything Is Copy," credited to one of Ephron's sons, Jacob Bernstein, and a co-director, Nick Hooker, includes a sequence in which Gene Siskel and Roger Ebert carry on about the awfulness of "Mixed Nuts."  Gene and Roger were frequent acquaintances, nice guys and terrific critics, but few things are as off-putting as a movie reviewer in a huff over an essentially harmless film.

I don't know why "Mixed Nuts" was so handily dismissed by Roger, Gene and other critics but my guess is that perhaps they had tired of Nora Ephron - and "Mixed Nuts" made her ripe for a bit of hero(ine) reduction.

I also suspect that if Christopher Guest's name was on this film as director, instead of Ephron's, it would have been viewed from a different, more receptive perspective. Everyone would have "got" it.

The alert "Mixed Nuts" would actually fit rather snugly into Guest's cockeyed oeuvre and it would certainly suit his cast of regulars.

Full disclosure: I have my biases, too.  At the time of its release, I was a sucker for the film's star, Steve Martin, and anything that he made during this period - "L.A. Story," "HouseSitter," "Roxanne," "The Spanish Prisoner," "Leap of Faith," "Parenthood," "My Blue Heaven" and "Mixed Nuts," companionable films all released within a six- or seven-year span.

A very faithful remake of Jean-Marie Poiré's 1982 French farce, "La Père Noël est une ordure," Ephron's movie is set in Venice, Ca. at Christmastime and, right there, it earned a valid smile from me. More specifically, it is set within the cozy confines of a suicide crisis hotline in Venice, overseen by Steve Martin (with brown hair here), a very pleasing, subtly neurotic Rita Wilson (pictured below with Martin) and the inimitable Madeline Kahn in one of her last screen roles as a flighty dame named Mrs. Munchnik. 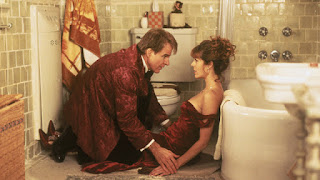 Among the assorted "mixed" nuts who dash in and out, looking for help and making trouble, are Juliette Lewis and Anthony LaPaglia as a deadpan (and very pregnant) couple straight out of New Yawk; Adam Sandler (in his first legitimate screen role) doing his singing man-child bit which proves most apt here; a game and surprising Liev Schreiber (pictured in top photo with Martin) in an early screen appearance as a cross-dresser interested in Martin, and Robert Klein, Rob Reiner, Jon Stewart, Joely Fisher, Michael Badalucco, Parker Posey, Garry Shandling, Steven Wright, a very young Haley Joel Osment - plus the voices of Caroline Aaron, Mary Gross and Victor Garber as comically desperate people who phone the hotline.

A daisy chain of fractured relationships make up the film, giving it a breezy reason for being, even though a serial strangler is on the loose and the hotline gang face eviction. It's absolutely loopy and I love it.

Note in Passing: Among the writers on Poiré's original were actors Josiane Balasko and Thierry Lhermitte, who also appear in Poiré's film - which was something of an all-star to-do in France as well.


Ephron's stellar cast (at least, some of it) 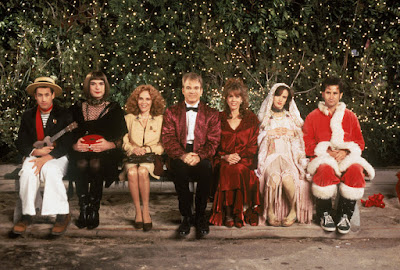 indelible moment: Levine's "The Night Before" 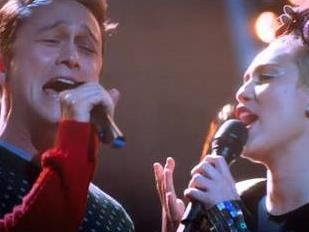 There are certain comedy genres that are irresistible, one of which is the "night on the town" comedy as exemplified by everything from Martin Scorsese's "After Hours" (1985) to Chris Columbus' "Adventures in Babysitting" (1987) - movies in which a night goes on seemingly forever.

One of the best (and an all-around terrific comedy in general) is Jonathan Levine's "The Night Before" (2015), about three guys - played by Joseph Gordon-Levitt, Seth Rogan and Anthony Mackie - who traditionally stretch every Christmas Eve into a night-long tradition of brief encounters and non-stop fun, again another blissful night that goes on seemingly forever.

Jonathan Levine is a name that is new to me and, despite his youth, he brings a certain sophistication and gracefulness to the on-going carousing in his film, helped in no small measure by Brando Trost's shimmering cinematography.  This hip movie looks like the fabulous party that it is.

The film's penultimate moment comes in a club where just about the film's entire cast congregates - Gordon-Levitt, Rogan, Mackie, Mindy Kaling, James Franco, Lizzy Caplan and the singular Miley Cyrus, who is performing at the club.  When Gordon-Levitt jumps on stage to join Miley in a duet of "Wrecking Ball," his way of proposing to Caplan, the moment becomes magical.  Although they're not in this sequence, one can feel the presence of co-stars Michael Shannon, Jillian Bell, Lorraine Toussaint and the incorrigible Ilana Glazer ("Broad City"!), who plays a Christmas-hating street-prowler named ... Rebecca Grinch. A companionable bunch all.

Levine also has a shrewd eye for casting.  This is a hip, terrific ensemble here. Companionable indeed.
Posted by joe baltake at 2:30 PM 2 comments: