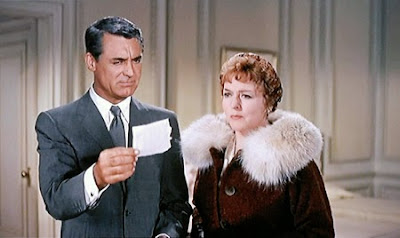 Hitchcock's compulsively watchable masterpiece, "North by Northwest" (1959), contains any number of memorable moments.  Hell, the entire film is a memorable moment. But one scene, in particular, stands out for me.

It occurs rather early in the film when Cary Grant returns to the Plaza Hotel - accompanied by the fabulous Jessie Royce Landis, playing his glib, eye-rolling mother - to search the room of one George Kaplan, for whom Cary's Roger O. Thornhill, an advertising executive, has been mistaken.

Snooping around in the suite's bathroom, Cary examins a hairbrush.

Walking back into the bedroom, he announces to mother (in a deadpan manner patented by Grant), "Bulletin! George Kaplan has dandruff."

Grant's body language, telegraphing disgust with the idea of dandruff, perfectly complements his line reading.  He hunches his shoulders and slightly flails his arms, making spindly movements with his fingers:

That's the kind of moment that flies right by you. Thanks for pointing it out!

Okay! What titillates my sense of humor is the disparity of ages between Cary Grant and Jessie Royce Landis, an actress I love. She plays Grant's mother in North by Northwest, deliciously, and delivers some of the movie's best lines in To Catch a Thief (my favorite guilty pleasure) as Grace Kelly's mother — and Grant's future mother-in-law. Think ageism is new? Nope! Not even close. Cary Grant, I checked, was born in January 1904. Jessie Royce Landis — get this! — was born November 1896. She was only 8 years older than Grant! Hilarious.