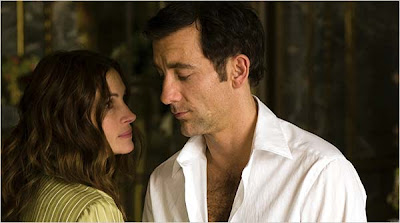 Flashback:
About a month ago, the box-office tally for the March 20-22 weekend produced a lot of dropped jaws among dedicated movie analysts.

Adding to the oddity of it all is the fact that the Cage film appeared to come out of nowhere, whereas the trailer for "Duplicity" seemed to be unreeling in the cineplexes for months prior to its opening.

What went wrong? A lot of wags blamed Roberts, the cads, jumping to the conclusion that her star powers has dimmed. Even the women on "The View" weighed in, suggesting that Roberts' relatively new status as a mom turns off the male audience core that once lusted after her.

Personally, I think the trailer for "Duplicity" made the movie look - how shall I put this? - intricate. A tad too intricate for today's modern attention-deficit audience. Meanwhile, the nakedly adolescent "Knowing" came across as a movie you could, well, sleep through and still "get." 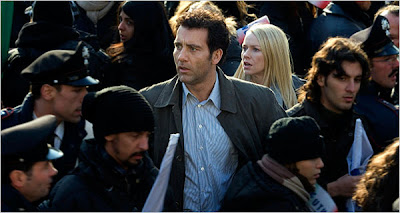 Earlier in the year, Owen's "The International," decidedly a film for adults, barely made a blip on the box-office radar. It was here and yet it's wasn't.

Flashforward:
It's the weekend of April 17-19. Zak Efron's "17 Again," a generic rehash, also takes movie-watchers by surprise, outdistancing Russell Crowe's sly and superb "State of Play" by several millions. Score one for the kids. 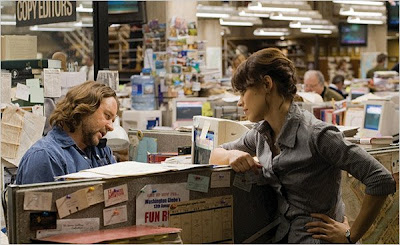 The moral of this disturbing tale:
Julia Roberts was hastily blamed for "Duplicity" not living up to its dollar-sign expectations. It had nothing to do with her status as star or mom. 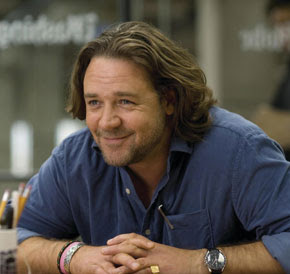 If you go back and examine the Top Spot (the only place that counts these days) for each movie weekend, you'll notice that, with the possible exception of "He's Just Not That into You," it's been littered with films for kids and/or childlike adults, starting with "Paul Blart, Mall Cop," the year's first official hit. It spent two weeks in the Number One slot.

This hit list also includes: "Friday the 13th" and "Madea Goes to Jail" (both also the dominant films for two weeks in a row), "Race to Witch Mountain," "Monsters Vs. Aliens," "Taken," "Watchmen," "Fast and Furious" and ... drum roll, please ... "Hannah Montana: The Movie."

Maturity, seemingly, is out. Maybe not so seemingly. So is sophistication.

Note in Passing:
The weekend that "17 Again" opened, I happened upon Scott Mantz's enthusiastic review of the Efron film on "Access Hollywood." He also had a few positive words to say about "State of Play" but only in passing. (The focus of Mantz's piece was really "17 Again.") He ultimately commented that he couldn't get completely behind "State of Play" because - I'm paraphrasing him now - "you had to pay attention to it too much."

I'm afriad that says it all. 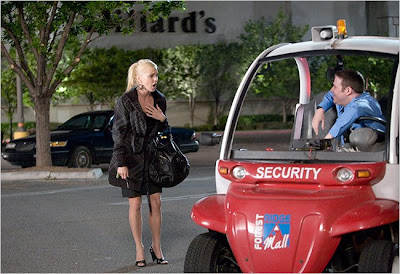 Farris and Rogan in "Observe and Report" - Judy Holliday and Walter Matthau for the New Millennium?

Seth Rogan turns in something of a major performance in Jody Hill's "Observe and Report," playing a character nearly as messed up as the movie surrounding him. This is unexpected and yet it really isn't.

Rogan came to movies a fully-formed character actor, despite mentor Judd Apatow's misguided attempt to foist him on us a leading man in "Knocked Up." He's a budding Walter Matthau and, from where I sit, he and Jonah Hill are ready for a Gen-X update of "The Odd Couple."

Jody Hill, meanwhile, is a filmmaker with a lot of great ideas rattling around his head, the best of which was to see the sublime Anna Farris as the new-age Judy Holliday and cast her opposite Rogan.

Hopefully, Rogan's next film will be advertized as "Rogan's Back ... and Farris's Got Him." I could watch these two forever.

But, oy, then there's this movie. Wait 'til you see it.

"Observe and Report" is the kind of "comedy" (I'm going to sound very old now) that expects us to laugh at characters and situations that aren't remotely funny. And I guess that we do laugh. Nervously.

"Observe and Report" has attracted the kind of reviews in which the critic in question has felt obliged to call the film "funny" but with some kind of modification. My favorite: "Numbingly funny." (I won't identify the critic.)

Personally, I'd opt for "squirmingly funny."

Since I retired as a working critic, I am fond of commenting to my wife after just about every other movie I see, "I liked it but I have absolutely nothing to say about it." I mean, take "The Reader" as a case in point. Prestige film, right? Yet, I would find it living hell to have to write about it.

But "Observe and Report" is one of those seemingly nothing movies that makes me feel terminally opinionated. In it, Rogan plays an all-too-familiar modern male figure suffering from what I call testosterone poisoning. Rogan's Ronnie Barnhardt is a pathetic, self-deluded loser who uses his expendable position as security chief at the depressingly typical Forest Ridge Mall to run roughshod over people - mostly other workers at the mall, most minority workers. Almost immediately, "Observe and Report" positions itelf as an edgy social comedy/social commentary.

And, initially, it works on that level. But the problem here is that (1) there is only one character who is even remotely sympathetic (a sweet woman named Nell, played by Collette Wolfe) and (2) Hill has little else but contempt for these characters (sweet Nell included). Even Ronnie's mother (Celia Weston) with whom he still lives, doesn't get off here. She's a flatout drunk who brags that she's "f****d" all of Ronnie's friends.

After a while, as the worthless Ronnie abuses a series of equally worthless victims, the film becomes, well, squirmingly funny.

The dubious moral of all of this: People are crap. 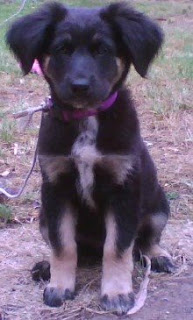 Note in Passing: In real-life, Ronnie wouldn't be even remotely amusing. There's an on-going case in Riverside, Ca. regarding a lost puppy named Karley (right) that was being returned to its owners by a neighbor when another neighbor - a gung-ho, take-charge, authoritarian firefighter - stepped in and took over, only to eventually beat the puppy to death when it didn't want to go with him. Karley suffered a cracked skull in three places; her nasal cavity and ear canal were crushed, and she lost an eye. She had to be euthanized. Check out this sad case on Justice4Karley.

No, a man like Ronnie Barnhardt is no laughing matter.
Posted by joe baltake at 2:05 PM 3 comments:


In his Friday, October 25, 1963 review, Bosley Crowther of The New York Times wrote:

"Obviously, Mervyn LeRoy did a little bit more than merely place his camera in the Helen Hayes Theater and shoot a straight running photograph of a performance of 'Mary, Mary' to get a film of the Jean Kerr comedy. But you would hardly be able to tell it from the rigidly setbound quality of his film version of the long-run stage play, which came to the (Radio City) Music Hall yesterday."

That just about says it all. Rarely has a film of a play been as faithful as LeRoy's film version of Kerr's urbane comedy, which was the most celebrated stage farce of its time. As Crowther indicated, the work of LeRoy's art director John Beckman and set decorator Ralph S. Hurst borrows heavily from the play's famed designer, Oliver Smith. Debbie Reynolds took over Barbara Bel Geddes's stage role, but the play's leading men, Barry Nelson and Michael Rennie, were back on that familiar set.

Yes, the film - about a divorced couple brought together for income tax purposes - is stagebound, but that's not necessarily bad. I like the idea of being transported back to the Helen Hayes Theater in 1960. The film perfectly approximates the joy of attending a matinee performance of a stylish, sophisticated comedy.

Warners' apprehension about releasing it to DVD is unfortunate, but "Mary, Mary" is not alone: Another LeRoy take on a play - his 1961 film verion of Leonard Spielgass' "A Majority of One" - has also been missing for years. How about releasing them on disc as a double bill?

Jean Kerr, who wrote "Mary, Mary," was of course the wife of the Times' great theater critic, Walter Kerr, and her adventures as the wife of a critic has been the subject of two other films - Charles Walters' bubbly "Please Don't Eat the Daisies" (1960), with Doris Day and David Niven as Jean's and Walter's on-screen surrogages, and Don Weis' "Critic's Choice," the film version of the 1960 Ira Levin stage comedy with Bob Hope as a theater critic whose wife, played by Lucille Ball, writes her own play.

By the way, Otto Preminger directed the original play and Henry Fonda played the role of the critic. "Critic's Choice" is new to DVD. 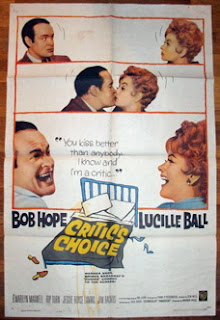 
Getting back to Debbie Reynolds, she has more than her share of lost movies. Among those missing from home entertainment formats are these made within a five-year period in the early 1960s: Frank Tashlin's "Say One for Me" (1959), George Marshall's "The Gazebo" and "It Started with a Kiss" (both 1959), Robert Mulligan's "The Rat Race" (1960), George Seaton's "The Pleasure of His Company" (1961), Gower Champion's "My Six Loves" (1963) and Vincente Minnelli's "Goodbye, Charlie" (1964). (Sounds like Debbie should get busy on her DVD titles.)

Reynolds' "The Mating Game," also directed by Marshall in '59, is one of the titles at long last being made available through WBshop.com,. Yes, Reynolds and Marshall made three - count 'em - three titles in 1959.

Note in Passing: Some Reynolds trivia... Her co-star in both "The Rat Race" and "Goodbye, Charlie" is Tony Curtis. Glenn Ford is her leading man in both "The Gazebo" and "It Started with a Kiss."
Posted by joe baltake at 4:50 PM 7 comments: