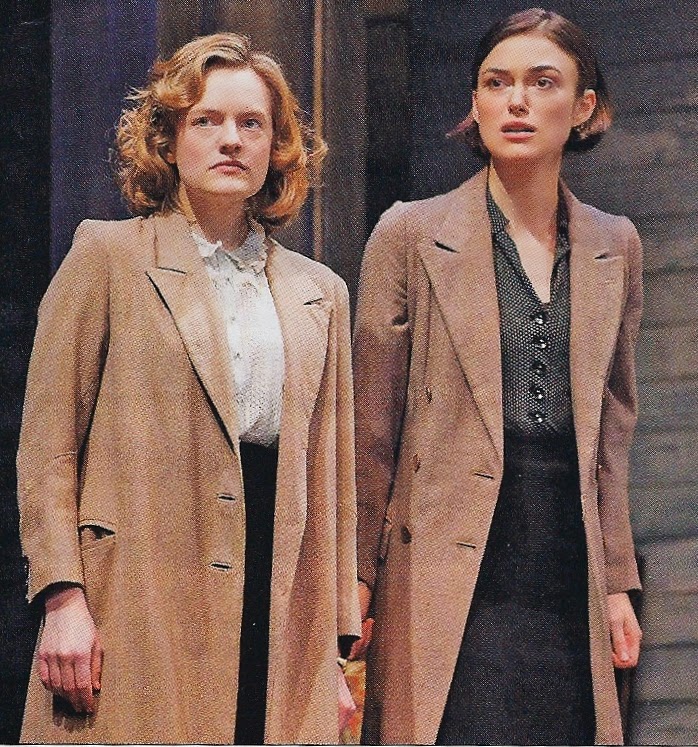 Timelessness knows no bounds. In a few months, Lillian Hellman's landmark play, "The Childlren's Hour," will be 85 years old - eighty-five. 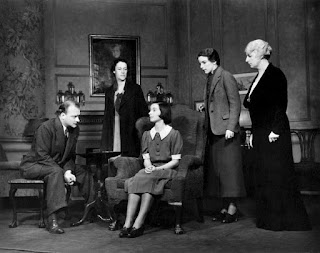 The story of two teachers whose lives are ruined by a student - by a lie about their sexuality that turns out to be possibly half-true (or maybe not) - "The Children's Hour" has been admired, acclaimed, dismissed, condemned, ostracized and rediscovered since it opened on Broadway at Maxine Elliott's Theater on November 20th, 1934, with Katherine Emery and Anne Revere in the lead roles as Karen Wright and Martha Dobie, respectively - best friends who run a boarding school for girls from entitled families.

The lie, of course, is about the heroines' presumed lesbian relationship. 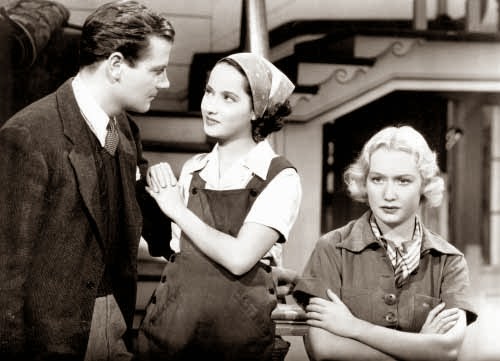 "The Children's House" has been revived many times (although less frequently in recent times) and filmed twice by the same director - none other than William Wyler, who first attempted to film the material in 1936, with Merle Oberon and Miriam Hopkins as Karen and Martha and, as the disruptive child Mary Tilford, a riveting Bonita Granville who received a much-deserved Oscar nomination for her remarkable performance.

Hellman herself wrote the adaptation of her play, retooling the material to meet the demands of Hollywood censors. Retitled "These Three" and with all hints of homosexuality excised, this version revolved instead around infidelity, with Joel McCrea as the man who comes between the two friends. And, somehow, it worked - quite effectively, in fact: The scandal now was about two women having sex with the same man at a place inhabited by young girls. On its own terms, "These Three" is a solid film.

But it simply isn't "The Children's Hour." 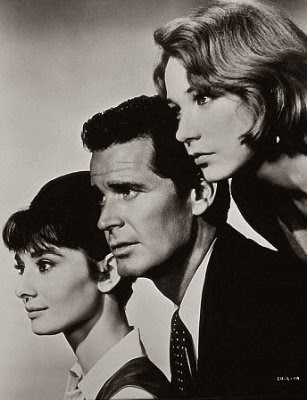 In 1961, Wyler elected to remake the film, with both the play's original title and the hint of lesbianism restored. This time, John Michael Hayes wrote the adaptation, not Hellman, but his script hews closely to her play.

Actually, it is the play.

This version boasts two stellar lead performances. Audrey Hepburn, as Karen, uses her face most expressively, subtly redefining it as the story progresses, and Shirley MacLaine is a revelation as Martha, flawlessly reciting a bravura monologue/confession, carefully written by Hellman, in a concluding sequence. It is nearly impossible to notice anything else about the film when these two are on screen, whether in tandem or alone.

Still, one is keenly aware of other crucial contributions to the film, such as Franz Planer's evocative black-&-white cinematography (which makes sure that the material, which is essentially still stagebound, is never static) and the gorgeously spare music score by Alex North. 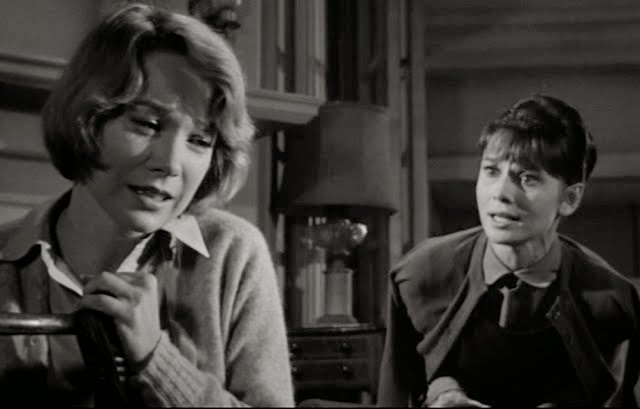 And there are the other actors, notably James Garner in his first serious screen role after fulfilling his TV/B-movie contract that he had with Warner Bros during the 1950s.

Wyler extracts wonderful work from film's younger cast, with each girl emerging as a distinct individual, despite limited screen time. Particularly memorable are Mimi Gibson as the school gossip and the always terrific Veronica Cartwright (also of Alfred Hitchcock's "The Birds" and, many years later, Philip Kaufman's remake of "Invasion of the Body Snatchers").

No one can summon tears as easily as the young Veronica Cartwright. 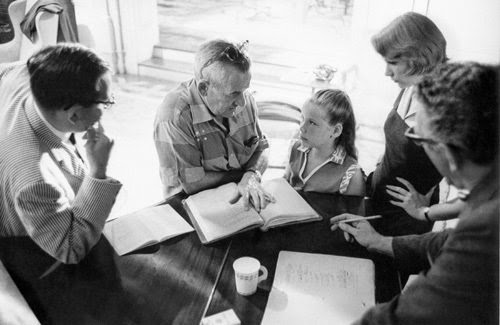 And in the difficult central role of Mary, there's the excellent (and courageous) Karen Balkin who would make only one more film - Peter Hyams' "Our Times" in 1974. A sad waste.

Balkin simply may have been too good as Mary - a little too convincing in the role of the brat who destroys several lives in Hellman's drama.

There are few scene more quietly scorching than when Bainter silences Balkin's hysterical excuses for her behavior with the demand, "Be still!"

Bainter was Oscar-nominated for her performance and, in a less competitive year, would have won, but she was up against Judy Garland, so electric in Stanley Kramer's "Judgment at Nuremberg," and Rita Moreno who won for Robert Wise and Jerome Robbins' "West Side Story."

Not appreciated upon its '61 release, "The Children's Hour" is one of those extremely rare - and fortunate - films whose reputation has grown, belatedly, with age. I've no idea if this version was simply underrated in its day or if it has improved with advancing years. Perhaps a little of both.

It's a great movie.

Incidentally, when Wyler filmed his '61 remake, United Artists dickered with the idea of also changing the title a second time - to the nondescript "The Infamous."  The brass thought that "The Children's Hour" would mislead audiences into thinking it was a family film. Wyler balked. 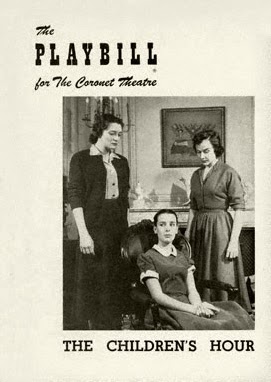 Among the various stage revivals, the most notable - and controversial - was the one directed in 1952 by Hellman herself at New York's Coronet Theater, starring Kim Hunter and Patricia Neal as Karen and Martha, respectively, and as Mary, Iris Mann, a talented child actress who had just played a troubled teen on screen in the charming comedy, "Room for One More," opposite husband-wife Cary Grant and Betsy Drake.

This version raised some dust as the playwright used her material as a commentary on the House Un-American Activities Committee. Throughout her life,  Hellman has always contended that "The Children's Hour" was less about lesbianism than about destructive gossip, a lie.

But, in recent years, there have been fewer revivals as the gay community has distanced itself from the material which has been construed as less well-meaning than misleading, particularly the shame and self-loathing voiced in the aforementioned monologue that's so passionately and indelibly read in the '61 film by MacLaine. 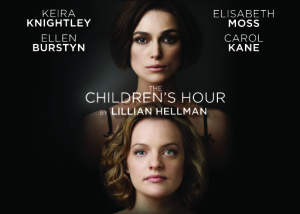 Such misgivings, however, didn't stop director Ian Rickson from mounting a London revival in 2011 and with a starry cast in tow -  Keira Knightley as Karen, Elizabeth Moss as Martha, Ellen Burstyn as Mrs. Tilford and Carol Kane as Aunt Lily.  It opened to mixed reviews on February 9th at the intimate Comedy Theater.  At the time, there were talks about moving the production to New York, but eight years later, that has yet to happen. And probably won't.

Too bad. We could use another incarnation of the material, given that lying has become a national pastime - made normal - in the last two years.

"The Children's Hour" may be of its time, still very much a period piece. And, as such, it works. Beautifully. But it's more than that. Much more.

Note in Passing:  Turner Classic Movies will be screening both of William Wyler's takes on Hellman's play - but not back-to-back. "These Three" will air on Monday, February 4 at 5:30 a.m. (est), while "The Childen's Hour" will screen later that day at 11:15 a.m. (est.). Compare and contrast.

~Elizabeth Moss and Keira Knightly in the 2011 London revival of "The Children's Hour"
~photography: Johann Peresson 2011©

~Poster art for the 2011 London revival
(pictured: Knightly and Moss)
Posted by joe baltake at 4:30 PM

Loved this. Thanks. For the record, Shirley MacLaine claims that when "The Children's Hour" was in production, the word "lesbian" was never invoked and there was no discussion of homosexuality between Wyler and his cast. I find this extremely difficult to believe.

Me, too. Perhaps Shirl is rewriting history or has a selective memory. But, then again, you never know.

The Childrens Hour is the kind of film, that stays with you, it show us the power of a lie on people's lives. A great film by a skilled Director William Wyler, see The Collector, also. comment by my wife Marcy.

Thank you Bob, for your comment. I consider this one of the most underrated of all movies - and one of Wyler's VERY best, no matter what Miss MacLaine says. People nit-pick against this fine cast; in fact, all of them are excellent and Bainter is outstanding.

The 1952 revival of "The Children's Hour" was produced at the Coronet Theatre on Broadway, not in Los Angeles. During rehearsal, Lillian Hellman told us that the theme had to do with the destructive power of a lie - it was not essentially about homosexuality.

Dear Iris- Many thanks for the heads-up about the city where the '52 revival was staged. The correction has been made. And also for sharing Lillian Hellman's insight. I suppose that Shirley MacLaine was on point when she noted that the word "lesbian" was not spoken during the filming of "The Children's Hour" Sounds like it was a directive that came from Hellman herself. Thanks again. -J

Both versions are wonderful, but the faithful 1961 remake has always been a favorite. Shirley MacLaine's penultimate speech is one of her career highlights. Alex North's score is yet another haunting theme from a composer who is still severely under-recognized. I recall Pauline Kael's homophobic and misguided review in I Lost It at the Movies.

Fucking brilliant. One of your best "articles" in a blog full of "best" articles.

The comments so far all praise Hellman's play and the films made from it, but these comments fail to take into account your superb reporting and writing, both of which led to the readers' conclusions about the excellence of the play, films, Hellman, Wyler, the actors, etc. etc. etc. It takes an astute writer to illustrate their excellence in a way that readers can understand. In short, you brought out the very best of the play and film (and performances),just as Wyler did when he chose to film the Hellman play. I thank you.