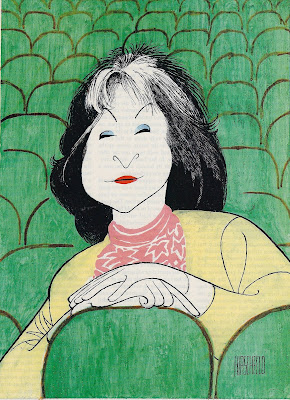 ...for Meryl Streep to play Pauline Kael in a biopic? 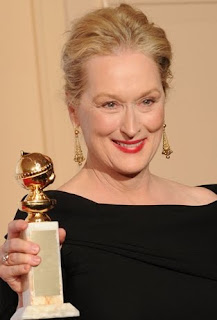 Dave Kehr gamely suggests the working title, "Andy and Pauline." But who on earth would play Kael-nemesis Andrew Sarris? Any suggestions?

Speaking of Streep, in a night awash in really arch acceptance speeches, Streep's at the Golden Globes left me a tad confused. Winning for her performance in Nora Ephron's "Julie & Julia," Streep started out by checking out presenter Colin Farrell furtively and then making a crack about wishing her name was T-Bone - T-Bone Streep.

"In my career, I’ve played so many extraordinary women that I’m getting mistaken for one, ... I secretly got to pay hommage to my own personal, not-so-famous hero – that’s my mother.

This is where the confusion came in - for me, at least,

"A lot of the people in this room knew my mother. She had a real joy in living...She just had no patience for gloom and doom. I’m not like that. I come to Golden Globes weekend and I am really honestly in conflict about how to have my happy movie self in the face of everything that I’m aware of in the real world. That’s when, I hear my mother’s voice: 'Partners in Health – shoot some money to Partners in Health. Put the dress on, put on a smile and just be damn grateful you have the dollars to help.'"

I took this - or mistook it, as the case is - for Streep granting herself permission to forget what's going on our there (read: Haiti) and to let the champagne and kudos flow. Wrong! As my friend Carrie Rickey has gently reminded me, Partners in Health is a relief organization and this was Streep's subtle way of expressly acknowledging the situation in Haiti.

Obviously, it was too subtle for me. Apologies all around, folks.
Posted by joe baltake at 9:44 AM 10 comments: 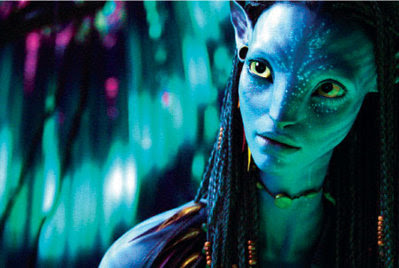 "Brainy & beautiful" could refer either to James Cameron's sublime "Avatar" or to its equally exquisite star, Zoë Saldaña.

Actually, it applies to both.

I came to Cameron's achievement belatedly and, frankly, with few expectations. And it is an achievement - a love story, a war flick and a message film, a plea on behalf of the environment, all wrapped in a green-hued, extraordinarily handsome package. Eye Candy for grown-ups.

Cameron's gentle tirade is about Pandora - a stand-in for the Garden of Eden or maybe Oz (take your pick) - and the ravaging of its resources by a private military company, a la Blackwater, that charges in and, with a sense of entitlement, brutally pushes aside the inconvenient indigenous population. (Cameron wittily names its chief resource Unobtainium.)

"Avatar" is topical, political and empathetic. Technically, it is intimidating - particuarly in Imax 3-D - but, narratively, it is genuinely humbling. 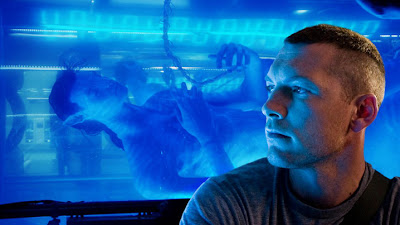 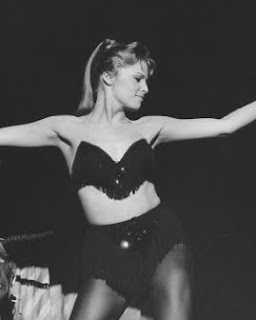 Barrie Chase, one of the
stars of Goulding's "Mardi Gras," in her strip routine

In my previous piece on "Mardi Gras," I neglected to mention that the Pat Boone ensemble musical, airing on the Fox Movie Channel at 2 p.m. (est.) on 13 January, was the final film of its director, Edmund Goulding.

The film was released in November, 1958 and the London-born Goulding died a year later in December, 1959 of suicide.

An actor/playwright/director on the London stage, Goulding came to Hollywood as a writer and eventually segued into direction. His novel, "Fury," was made into a film by Henry King, with Goulding writing the adaptation himself. It was his 22nd writing assignment in Hollywood.

Goulding's first film as a director was 1925's "Sun-Up." His second film, made the same year, was the incredibly popular "Sally, Irene and Mary." Something of an adjustible wrench as a filmmaker, Goulding directed 41 films, including Garbo's "Anna Karenina," Marion Davies' "Blondie of the Follies," the back-to back Davis films "The Old Maid" and "Dark Victory," MGM's all-star "Grand Hotel," the Eleanor Parker remake of "Of Human Bondage," Dorothy McGuire's "Claudia," Tyrone Power's terrific "Nighmare Alley," "The Razor's Edge" with Power and Gene Tierney, and finally... 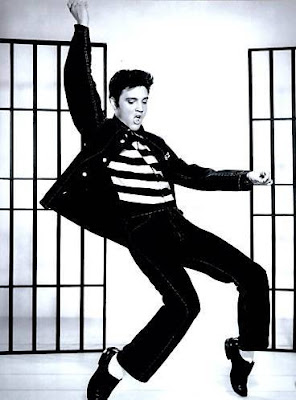 Elvis was born 75 years ago today in Tupelo, Mississippi.

To celebrate, both Turner Classic Movie and the Fox Movie Channel have scheduled a cross-section of his films.

Richard Thorpe's "Jailhouse Rock" (1957) caps the day with a midnight screening. This film has a reputation greater than it deserves; its only notable element is the clever staging of the title number.

Fox Movie Channel, meanwhile, airs two of The King's better efforts, both made for Twentieth Century-Fox - Philip Dunne's "Wild in the Country" (1961), which teams Elvis with three very good leading ladies, Hope Lange, Millie Perkins and Tuesday Weld, in a script by no less than Clifford Odets, and Don Siegel's "Flaming Star" (1960), a Western co-starring the great Delores Del Rio. They air at 2 and 4 p.m. (est.), respectively.

The most glaring omission is Elvis' debut film, Robert D. Webb's "Love Me Tender" (1956), which offered The King his ideal leading lady.