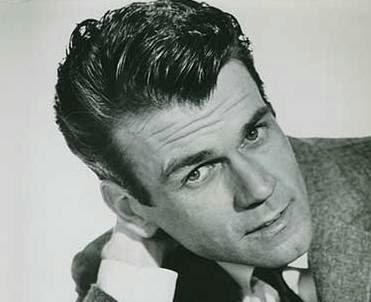 As anyone familiar with this site well knows by now, cinema obscura is a recurring feature devoted to titles that have been underrated, neglected or completely ignored.  Well, there are neglected films and there are those films that are so obscure that no one is even aware of their existence.

Two examples of the latter extreme will be showcased at San Francisco's invaluable Roxie Theater (3117 16th Street) during "A Special Weekend with Don Murray," which was curated by the Roxie's ever-resourceful Elliot Lavine and will screen there the weekend of July 11-13.

First, a little background about Murray, a classically handsome, rugged actor who was nominated for an Oscar for his film debut opposite Marilyn Monroe in Joshua Logan's "Bus Stop" (1956).  Jack Lemmon, who had briefly worked with the director when Logan was brought on to do some backup work on the film of "Mister Roberts" (1955), was a serious contender for the role of Beauregard Decker, the headstrong cowboy in "Bus Stop," but the part went to Murray and it is impossible to image anyone else in the role. 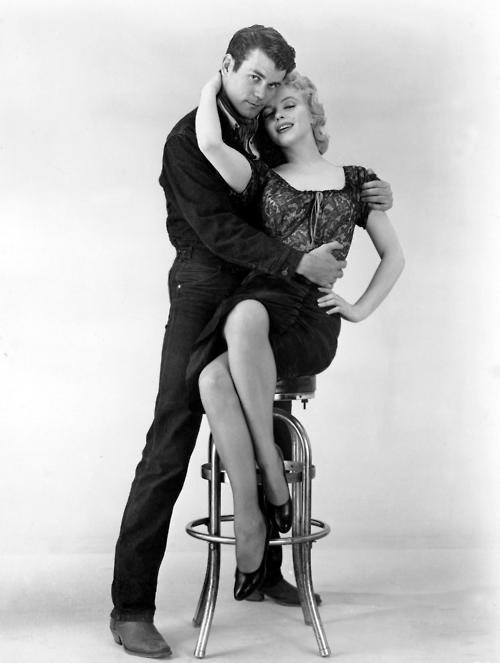 Although Murray did some serious screen acting in the 1950s, particularly in film versions of demanding plays (Michael V. Gazzo's "A Hatful of Rain") and teleplays (Paddy Chayfesky's "The Bachelor Party"), and made two particularly fine Westerns for his home studio, Twentieth Century-Fox (Richard Fleischer's "These Thousand Hills," with Lee Remick, and Henry Hathaway's "From Hell to Texas," with Diane Varsi),  he never quite made the A list, either by design or lack of luck.  Murray (below with Inga Swenson) had a mid-career memorable role as the closeted young Senator Brigham Anderson in Otto Preminger's "Advise and Consent" (1962), but by this time he had branched out as something of an auteur of social-issue films. 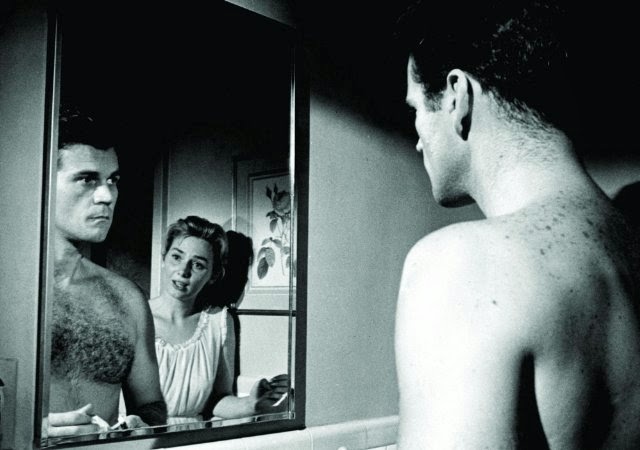 He was the driving force behind Irvin Kershner's "The Hoodlum Priest" (1961), which he co-wrote (with Joseph Landon), and Denis Sanders' "One Man's Way" (1964), a biopic of Norman Vincent Peale. Other fascinating projects followed - including Herbert Danska's "Sweet Love, Bitter" (1967, again with Varsi), and Mark Robson's "Happy Birthday, Wanda June" (1971), based on the Kurt Vonnegut play (with a screenplay by Vonnegut) - but Murray seemed to remain a handsome, talented blur in the minds of both critics and moviegoers. Not fair.  He's a strong, impressive actor

The two obscure titles being screened during the Roxie's well-deserved tribute to Murray are "The Confessions of Tom Harris" and "Call Me by My Rightful Name" (both dated 1972), films that Murray made (apparently with friends) but, for reasons not entirely clear, that were never released theatrically or on home entertainment. Information on both is lacking; neither is listed among Murray's credits on IMDb. 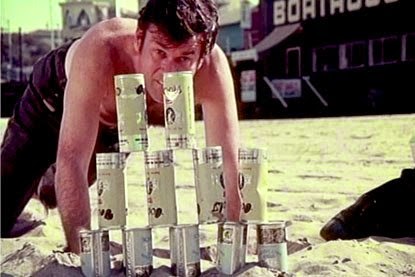 The first, "The Confessions of Tom Harris," was in production from 1966 to 1972, with both John Derek and David Nelson listed as its directors.  (Nelson, coincidentally, had worked with Murray's first wife, Hope Lange, on Robson's film of "Peyton Place.")  It is described as "the spiritual awakening of a bad man," with Murray (pictured above in a scene from the film) in the lead role, supported by Linda Evans (Derek's wife at the time) and veteran character actor David Brian. 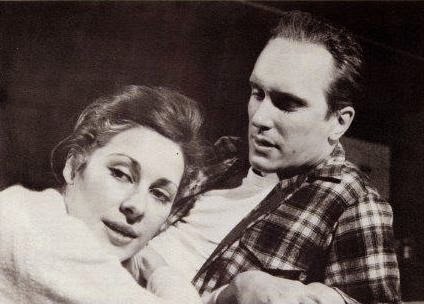 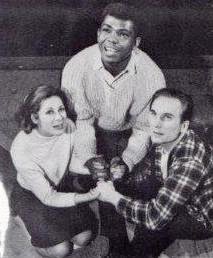 Much more interesting is "Call Me by My Rightful Name," based on Michael Shurtleff's much-admired 1961 off-Broadway play which was directed on stage by Milton Katselas (who helmed "Butterflies Are Free" on stage and film).  Adapted by Shurtleff from a story by S.F. Pfoutz, the play, lauded for being "honest, moving and courageous," is a race relations story about two men, Columbia students rooming together in New York. Doug is white and rebellious and Paul is black. When the two disagree on their definitions of love, a fight ensues, forcing a young woman, Chris, the object of their disagreement, to referee. 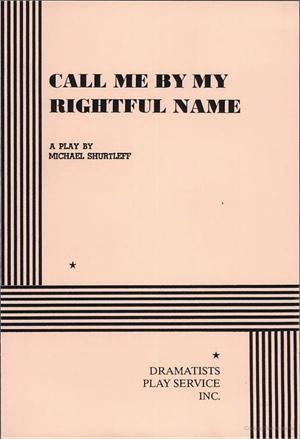 On stage, the stars (pictured above) were Joan Hackett as Chris, Robert Duvall as Doug and, yes, Alvin Ailey (before he became an acclaimed dancer-choreographer) as Paul; Hackett won several acting awards (the Theatre World, Obie and Drama Desk trophies) for her performance.  "An exciting new play by a new American dramatist," New York Newsday reported in its review, adding "The Best off-Broadway play of the year."  The New York Times wrote that "Mr. Shurtleff has the feel of theatre in his blood.  His play is bright, truthful."

Murray reportedly was so taken by "Call Me by My Rightful Name" that he saw it twice and had hoped to film it immediately - in 1962 - with Sidney Poitier starring opposite him.  Scheduling conflicts prevented this and, instead, it took ten years before the play was finally filmed - with Otis Young and Cathy Lee Crosby starring with Murray (all pictured above) and playwright Shurtleff directing his own adaptation.  (Shurtleff, who was also a major casting director, died of lung cancer at age 86 in 2007.)

There are no plans to release "Call Me by My Rightful Name" on DVD, but I for one wish Don Murray would reconsider.  I'd love to see it, if only for the opportunity to watch Murray act again.

Note in Passing: OK, a bit of Don Murray trivia...  As noted, Murray was married for years to Lange, whom he met on "Bus Stop."  After they divorced, Lange married Alan J. Pakula who, at the time, produced films directed by his partner, Robert Mulligan. Anyway, Paklua cast Muarry, his wife's ex, in "Mulligan's "Baby, the Rain Must Fall" (1965).
Posted by joe baltake at 5:41 PM 3 comments:

cinema obscura: George Seaton's "The Proud and the Profane" (1956) 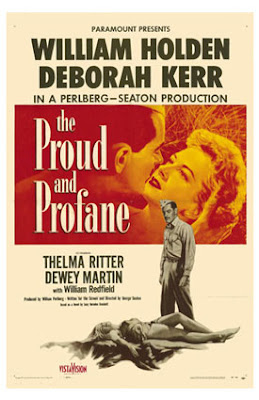 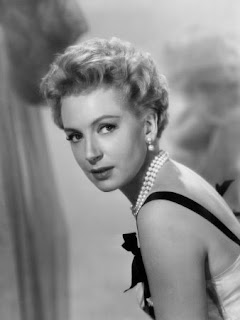 George Seaton's "The Proud and the Profane" (1956), an inexplicably lost movie, is ripe for rediscovery. This unusually angry war-time film has the same scrappy, logical and often blunt ways of its star, William Holden, who deglamorized his leading-man good looks here with a slash of a moustache and closely-cropped crew.

As a Marine commander stationed with his battalion in New Caledonia in 1943, Holden plays his role with a temperamental flair that suits the material, using acting tones that are more impassioned than morose. Holden's character, aptly named Black, is opinionated and judgmental and his latest disapproval is the presence of Red Cross women who minister the soldiers there in assorted ways. One is Lee Ashley - played with her usual brand of ladylike steeliness by Deborah Kerr - a war widow both annoyed with and attracted to Black.

Naturally, she falls in love with him. 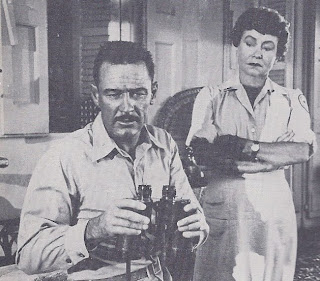 While "The Proud and the Profane" has the underpining of a soap opera, it is decidely a harsh soap opera, stubbornly unappeased in its ways. This quality is particularly evident in the supporting work of the invaluable Thelma Ritter as Kerr's Red Cross superior; William Redfield as a battle-shocked Chaplain; Dewey Martin as a young soldier important to Kerr's past, and Peter Hanson as a naval officer who is both the polar opposite of Holden and a potential romantic threat.

"The Proud and the Profane" - based on the fictionized memoir, "The Magnificent Bastards," by Lucy Herndon Crockett - came three years after Fred Zinnemann's Oscar-winner for Columbia, "From Here to Eternity," and it's clear Paramount had thoughts of repeating Columbia's success, hoping perhaps that Kerr, star of both, would be the lucky charm.
Posted by joe baltake at 5:05 PM 5 comments:

Yale & Mary's Academy of the Overrated

There's a scene from the 1979 Woody Allen movie, "Manhattan," in which Isaac Davis (Allen) does his best to put up with an insufferable conversation between his best friend, Yale (Michael Murphy), and Yale's pretentious mistress, Mary Wilke (Diane Keaton). Tracy (Mariel Hemingway), Isaac's teen girlfriend, is a bystander.

The dialogue is by Allen and Marshall Brickman.