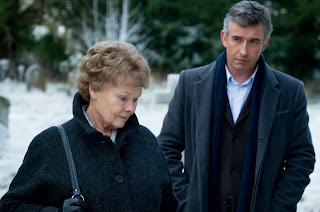 As a Catholic-turned-Lapsed-Catholic-turned-Collapsed-Catholic, Stephen Frears' heartbreaking "Philomena" resonated with me.  My reasons for appreciating the film oddly coincide with the reservations of those Catholics who condemn the film: It is an unblinking attack on the Church.

The film is "based on a true story," and ironically, those sections that deal with the Church's harsh treatment of its title character are the only ones based on fact.  Just about everything else about the movie has been fictionalized.  There are areas of "Philomena" where one can question its veracity but, by all accounts, its depiction of the Church in this particular time and place are based on an eyewitness account and are accurate.

Initially, the story here is almost Dickensian - It is 1952 and a teenage Philomena Lee (Sophie Kennedy Clark), pregnant and unwed, is sent to a convent in Roscrea, Ireland, where she gives birth and is then put into viritable servitude, seeing her infant son only once a week.  The nuns there treat their wards with contempt, intolerance and utter disregard, the latter epitomized by their routine of selling the babies in their care to wealthy Americans.  That's how Philamena loses her little Anthony.

Flashforward to today when the 70-year-old Philomena (Judi Dench), distracted by guilt and curiosity, sets out to find her son with the help of a jaded journalist, Martin Sixsmith (Steve Coogan), who is there to cover her plight/journey for a magazine piece that eventually became the book, “The Lost Child of Philomena Lee.”  They travel to American to locate Anthony and "Philomena" becomes a road film with an odd couple at its center. Entertaining as this is, it's also blatantly untrue.

But the film remains fascinating nevertheless - and disturbing, thanks to those nuns, who worked for decades to keep mother and son apart as one looked for the other.  And "Philomena" also remains wrenchingly sad.

What Philomena eventually learns about Anthony only validates her lifelong fears for him, her dread. She lived a nightmare that never went away and, yet as played by the great Judi Dench, she was everything that her tormentors, the nuns, weren't - forgiving and humane.

I found this film to be both appealing and honorable, despite whatever literary licence it takes. Dench rules!

I just love the delicate inspiration in Frears’s work. Far from being just a great formalist, he is a classical filmmaker with a deep understanding of the human heart.

I've read in other places this fine film described as a melodrama. I'm happy that you didn't call it that.
I have a hard time calling Frears's film a melodrama. It takes its time tracing out the grounds for conflict, which seems at odds with melodrama’s rashness.

Melodrama? No. Plain and simple, it's a movie-movie.

While the movie held me with it's narrative, what really fascinates me about it is how well Frears mixed and combined genres here.

What a wonderful movie. The character of Philomena is so multi-dimensional -- literal-minded and almost completely without a sense of humor or irony, yet enormously kind and empathetic, unapologetically middle-brow, yet surprisingly sharp about people. And Dench encapsulates it all in one of the finest screen performances I've ever seen. Her co-star does amazing work too. DON'T MISS THIS FILM!