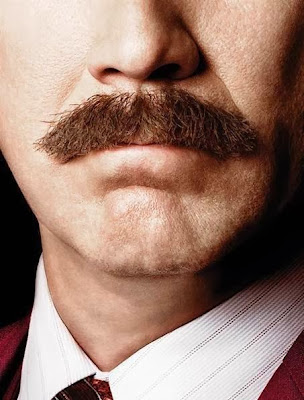 Will Ferrell, in character as the delusional news anchor Ron Burgundy,  has been so ubiquitous, tireless and clever in promoting “Anchorman 2: The Legend Continues,” his latest collaboration with writer-director Adam McKay, that the movie itself is somewhat anti-climatic – not nearly as much fun as the marathon marketing prelude leading up to its release.

It’s also something of a missed opportunity.  Ferrell and McKay have material here that’s ripe for a scathing satire – the advent of the 24-hour news cycle – but they apparently were more intent with regenerating gags and situations that, over the past decade, has turned 2004’s “Anchorman: The Legend of Ron Burgundy” into a cult favorite.   Case in point:  Their restaging of the first film’s memorable rumble sequence is twice as big and twice as long and boasts twice as many cameos, but what was so exhilarating in the original now feels leaden and obligatory.

The movie’s one original comic high point has Burgundy whipping a nowhere car chase into a sensational news story and ratings winner, but Ferrell and McKay don’t take the joke any further.  All those wasted cameos in the rumble could have been scattered through similar faux headline pieces,  the kind of nothing stories that cable news shows currently – and routinely – beat into the ground with wild-eyed fervor.

Instead, the film gets waylaid by an extended and endless sequence that has the Burgundy character going into hiding at a seaside lighthouse to rehabilitate himself.  It’s very odd, not very amusing and it stops the film cold. “Anchorman 2: The Legend Continues” never bounces back from this bizarre, needless detour and never becomes the bigger and better follow-up that it was designed to be.  Besides, Ferrell and McKay more than topped themselves two years after the original “Anchorman” with“Talladega Nights: The Legend of Ricky Bobby.”
Posted by joe baltake at 1:30 PM

Come on, Joe, Ron Burgundy rocks. He doesn't need a good film. The character's enough. Did I laugh? Yes, I did - even at things that really weren't funny. That's because Ferrell always brings a smile to my face. Cheeers!

Thanks for your feedback, Jay Dee, and apologies for the light censorship that it necessitated.

This movie just tries too hard. The magic is lost.

Joe, agree about Anchorman 2. A wasted opportunity. Plus, the whole enterprise wraps itself up into entropy and a total moral chasm. Ron's "black panick" scene at the dinner table is charmless and ugly and plays against a character that we're supposed to like. Hell, Ferrell is trying his damndest to turn Burgundy into some kind of icon. The biggest problem, however, is the way the makers deal with such abysmally conceived material.

A lot has happened during the decade since the first "Anchorman" and Ron Burgundy is now overshadowed in terms of comic narcissism by Rush Limbaugh on the right and Chris Matthews on the left, both of whom, if you watch either of their shows, are now much funnier than Ron and much more oblivious.

This movie was terrible, all around. Tons of missed opportunities in story line. Not that hard to have a good comedy.

BTW, and it's "The Ballad of Ricky Bobby." Do your homework big guy.

Ooops! Noted, a.n. And corrected. And to think that this film is one of my guilty pleasures! -J

I agree that the buildup, truck commercials and interviews were much more entertaining than the movie. I cannot believe this movie got 75% fresh tomatoes from critics!