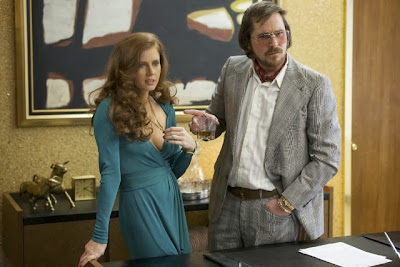 David O. Russell's compulsively watchable "American Hustle" could be taken for the unhealthy spawn of Martin Scorsese's "GoodFellas" and John Badham's "Saturday Night Fever."  It's a crime film but it dances.

Directed by a man both delighted with and driven by the wild theatricality of his juicy material, "American Hustle" is ostensibly about the Abscam scandal of the 1970s, which as Russell sees it, was an extravaganza of pitched acting, with F.B.I. agents, scam artists and politicians as members of a game ensemble.  It was a scandal, yes, but also something of a Shakespearean comedy with colorful characters pairing off, double- and triple-crossing and entrapping each other and often taking time off to party. And David O. Russell, serving as a master dramatist of his story's many little and big skirmishes, directs it all with a pop rapture.

Abetting him every step of the way is a hugely companionabe cast of actors who shine individually and in tandem. Christian Bale, by sheer willfulness and talent, turns his con man Irving Rosenfeld, a potential vulgarian, into an unexpected (and unexpectedly poignant) romantic hero; Bradley Cooper brings a pent-up physicality to his F.B.I. agent, a man as quirky as he is ambitious; Jeremy Renner finds a certain innocence in his cluelessly corrupt politician, and Jennifer Lawrence plays a Jersey provocatrice with a cartoon verve Frank Tashlin would have appreciated.

Best of all, however, is Amy Adams, an exquisite actress with apparently no vanity.  Her Sydney Prosse, working in cahoots with Irving, is both startled and appalled by what she lets herself do.  She does not exactly find the sleaze of her situation unpleasant or unappealing. She is the mistress of her own debauch and, as Adams plays it, we're with her every step of the way, cheering for her success.  Adams tears into this role as if it were a raw slab of meat and she triumphantly devours it.

With these people as our guides, we are only to happy to be their accomplices to their invigorating American hustle.

"American Hustle" for me is a perfect example for me of Russell’s continuing evolution as a filmmaker and what keeps me, for the most part, embracing him. What I love about this film is the imbalance between the great, bravura set pieces and Russell's overall perspective. I need to go back to "Flirting with Disaster," "Three Kings" and "I ♥ Huckabees."

I love that this film really doesn't both the socio-political content or perspective of the times. Granted, it has great period atmosphere, but that's about as far into the '70s that it gets. Russell staged it as a grand, timeless tale. Can't wait to see it again!

Loved this movie, but I think it will take me a couple of viewings to reconcile the different parts of AMERICAN HUSTLE. Which should be bliss for someone who worships at the altar of 70s American Cinema.

What really impressed me about Russell's work here is its fullness. I appreciate the charge of excessive stylization that he brought to this project and that he nudged out of his performers. He currently stands out against the then prevailing norm, in much the same way that Sternberg, Welles and Minnelli did, to name just three.

You can tell that the director is really enjoying the ride - the film is marvelous fun, without a single lull in it. My head is still spinning.

My favorite film so far is "American Hustle"

American Hustle ....truly disappointing flimsy shallow story where nothing really happens in the long tedious 2 hours I endured watching it. Performances and styling are very good, especially Jeniffer Lawrence, she was a stand out.

But seriously I cannot understand why this movie would be nominated for any awards.