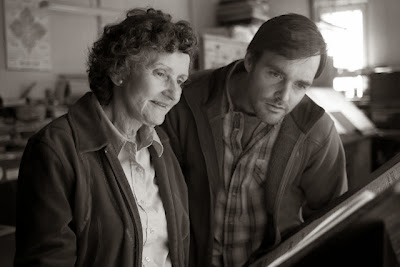 In her review of the 1974 Paul Mazursky fillm, "Harry & Tonto," Pauline Kael noted that it was "the most difficult kind of comedy to bring off, because it comes directly from the moviemaker's feelings about life."

The exact same observation could be made of Alexander Payne's hauntingly spare and gnawingly moody "Nebraska," another "old-man-on-the-road comedy," as Kael also described "Harry & Tonto."

The tricky part, I think - and the reason Kael opined about the difficulty of the genre - is that these films aren't entirely comedies.  There's also a melancholy to them. especially "Nebraska," which takes the risk of coming close to depressing its audience with its clear-eyed, sometimes harsh. view of a certain area of Middle America, one in the state of stasis.

Payne offers no surcease from his depiction of a people left immobilized by a paralyzed economy as he follows the plight of Woody (Bruce Dern, excellent), an old man who has deluded himself into think that he's the big winner in a millionaire sweepstakes and is intent on collecting his prize, much to the chagrin of snappish wife (June Squibb, also excellent), a woman who has had to develope a tough skin and alienating persona in order to get through life with a man who was always an easy touch.

Accompanying him on the pointless trip is Woody's younger son, David (Will Forte), who feels empathy for the old man, perhaps seeing his own beak future in him, and who sees this as one last opportunity to finally connect with his father.  As wonderful as Dern is in the film, "Nebraska" really belongs to Forte, whose relaxed, naturalistic turn as  a decent man is quietly powerful. His performance is entirely transparent.

The mood of hopeless that pervades "Nebraska" is sustained by the gorgeous, evocative black-&-white, wide-screen cinematography by Phedon Papamichael.  It completes the picture.

Credit: Paramount Vantage / Courtesy of Paramo
Posted by joe baltake at 9:47 AM

Thinking about comedy lately, nice to see it discussed here. A comedy of "Nebraska's" sort could be an ordeal for the viewer. But I appreciate that artists like Mazursky and Payne never pander for laughs at the expense of their characters or pander to their audiences' baser instincts. "Nebraska" is about as far from the "Jackass" films (male characters getting kicked in the privates - Ha ha!) that one can get, and yet it is still not always pleasant to watch. Instead, it's instructive and, threfore, constructive.

Gregg, you said it “could be an ordeal for the viewer.” Well, yeah, it could be. You could say the same of bathroom humor. It's all relative to the viewer.

In any event, the analytical audiences and, of course, critics for these kinds of comedies don’t seem to have any problems processing them, and I’m content to leave it at that.

I believe you are twisting, and misrepresenting, the point of this film. It is not a comedy!

But, Vivian, it is. The director himself has described it as just that in interviews.

Loved your review of "Nebraska" - and loved the movie, too. I could see it many times over.

Nice review, and yes, I agree with you. I consider it to be a dramedy. It needs the laughs as a relief valve. Otherwise we would be submerged in a bit of melodrama watching an old man wander, and this film is more than that.