Scorsese's "The Wolf of Wall Street" 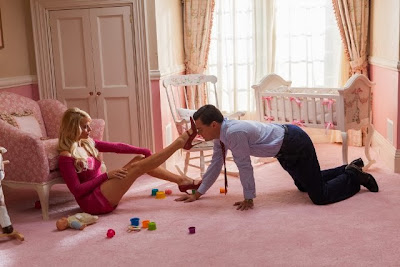 The intoxication of greed and excess that Martin Scorsese's "The Wolf of Wall Street" shares with its viewer is woozily addictive.  While the out-of-control lead character on screen - that would be a brilliant Leonardo DiCaprio in a wildly solipsistic, mesmerizing performance - and his cohorts routinely snort cocaine off the breasts, derrieres and privates of willing young women, the audience gets high on the complicity of it all.

Clocking in at a challenging, self-indulgent three hours (which, oddly, hardly seems enough), this modern operatic debauch is an attempt by Scorsese and his scenarist Terence Winter to showcase The Decline of the American Empire in all its naked, hollowed, self-hating glory, and to say that Scorsese nails it is a naive and rather foolish understatement.

Money here is worse than the root of all evil - it's rot. And at the center of this rot - and responsible for most of it - is DiCaprio's character, Jordan Belfort, a real-life stock trader so sociopathically crooked and so oblivious to his daily crimes that he almost seems like an innocent.  Belfort, by all accounts, couldn't care less whether his clients made money, so long as his cut was intact.  And his specialty wasn't fleecing the wealthy, but the struggling working man who he finessed into investing in crummy penny stocks. Even his supportive first wife, the sweet Teresa (Cristin Milioti), is empathetic enough to wonder why Jordan is targeting people who can't afford to lose money.  Her decency gets in his way and she's out.

Enabling him are people who should know better (his father, played by Rob Reiner); those who invariably wise up (his Barbie-doll second wife, played by a terrific Margot Robbie, above); those who share his lack of scruples and dubious values (his friend and business partner Donnie Azoff, played to perfection by Jonah Hill), and those who impressed him in the wrong way (Matthew McConaughey, below with DiCaprio,  in an extended cameo).  But Jordan is way beyond control, and the movie depicting his rise, fall and kinda redemption is as outsized and excessive as he is.

But unlike your typical impresario, Scorsese eschews a big finish in favor of a series of telling scenes, one of which is of the F.B.I. agent (Kyle Chandler) who busted Belfort sitting in a subway car on his way home after a day's work - a sort of prison that Belfort smirkily refers to earlier in the film. A big finish, no. But it's appropriately quiet - and haunting.

Scorsese is a film poet!

Scorsese's THE WOLF OF WALL STREET is very much the new millenium's zeitgeist movie for me. This is rich, interesting filmmaking at every level. It shouldn’t be judged for its more repellent moments - and there ARE a lot of them - but for its breakdown of old mores that are still very much with us. The emotional nastiness of its satire very much has a point. The political satire in It's pretty jejune in my opinion.

I find it difficult not to regard “The Wolf of Wall Street” as a masterpiece or near masterpiece. Whatever reservations I may have of the film's thematic/ideological drive only underline its aesthetic effects on me. They only consolidate my feeling that this is a challenging film with few flaws, if any. This is based on two viewings - so far.

Apologies, people, but "The Wolf of Wall Street" just didn’t resonate with me. It's pretty rough (although lovely to look at) and never goes beyond that. Sorry

Beyond being a great filmmaker, Scorsese is an involved cinephile, a hero of film preservation and, occasionally, a maker of telling documentaries.

Wolf was very disturbing and much too long! I almost walked out several times, but wanted to see him get his comeuppance, which never really happened. I walked out angry and feeling dirty. Too much focus on sexual excess, drug abuse, and human manipulation. No new ideas. I was hoping this film had a new story to tell about Wall Street, but it was just another absurd exaggeration of Gecko, the Michael Douglas character in "Wall Street."

a.n.- I get what you say but not everyone on-screen or off experiences a comeuppance. In fact, in most cases, they don't. The bad guys get off. That's life and I appreciate that movies sometimes (but not often) reflect this. It's a sophisticated notion lost on some people. My question for you: If you were inclined to walk out, why didn't you? Life's too short to waste on a movie that doesn't meet your expectations or standards.

It's pure brilliance. The purpose of a film is to be entertaining is it not? This was by far the most entertaining and funny film I've seen in many years! I plan to view it in theaters several more times.

One of my favorite current TV shows is "Boardwalk Empire," which is produced by Terence Winter, who also writes, or co-writes, some of the scripts. "The Wolf of Wall Street" strikes me as a good companion piece. Both offer excellent proof of my favorite line of dialogue from the TV show, spoken by Arnold Rothstein, the evil genius who fixed the 1919 World Series, and who recognized Prohibition for the money-printing machine it was: "All of man's problems come from his inability to sit quietly in a room by himself." I suspect Belfort would consider the very notion to be nutty, which more or less proves the truth of it.

No one has mentioned how stylized the film is. I see the stylization in Scorsese's film not just as art, but also as an expression of a kind of mental illness that pervades society at the moment.

Loved the visually wonderful star acting of Leonardo. I say visually because he seems to act with his entire body in the film. Every gesture is precise.

Scorsese continues to portray the depravity of man in his movies. The Wolf of Wall Street is of no exception. L D and Martin seem to have developed a relationship like that of Deniro and Scorsese.

I found the movie too long and not worthy of an Oscar Nomination.

Scorsese's debauched film making continues as he portrays the raw, depraved character(s) in The Wolf of Wall Street. I thought it was a bit too long but not Oscar material.

Is this as great a film as Goodfellas? No. But you have to remember, the murderous gangsters in that movie where characters with heart that you come to love, The Wolf of Wall of Street is about...bankers. Considering the source material, I'd say Scorsese did an amazing job.