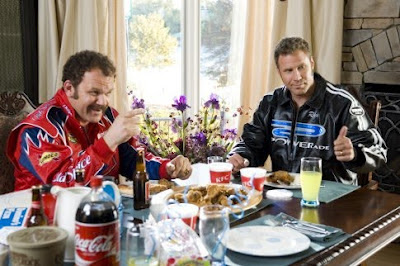 In anticipation of the latest Will Ferrell-Adam McKay collaboration, "Anchorman 2: The Legend Continues"  (opening December 18), I off this hilarious scene - the"Baby Jesus" grace - is from their best movie to date,  McKay's slyly subversive "Talladega Nights: The Ballad of Ricky Bobby," in which Will Ferrell plays a clueless George W. Bush (yep)  in the guise of clueless NASCAR stock car racing sensation Ricky Bobby.

The sequence in question has the Bobby family gathered around the table for a feast of fast-food takeouts. The clan includes Cal Naughton Jr. (John C. Reilly), Ricky's BFF (Cal is "shake" to Ricky's "bake"); Carley Bobby (Leslie Bibb), Ricky's hot wife; Chip (Ted Manson), Carley's father, and Walker and Texas Ranger (Houston Tumlin and Grayson Russell), Carley and Ricky's obnoxious sons. The wicked dialogue was written by Ferrell and McKay and There's a reason why Manhola Dargis touted "Ricky Bobby's" script as one of the five best original screenplays in her 2007 New York Times essay on recommended Oscar nominations for 2006.

And let the grace (and its sureally profane aftermath) proceed...

Ricky: Dear Lord Baby Jesus, or as our brothers to the south call you, Jesús, we thank you so much for this bountiful harvest of Domino’s, KFC, and the always delicious Taco Bell. I just want to take time to say thank you for my family, my two beautiful, beautiful, handsome, striking sons, Walker and Texas Ranger, or T.R. as we call him, and of course, my red-hot smoking wife, Carley who is a stone-cold fox.

Ricky: Also wanna thank you for my best friend and teammate, Cal Naughton Jr. who’s got my back no matter what.

Ricky: Dear Lord Baby Jesus, we also thank you for my wife’s father, Chip. We hope that you can use your Baby Jesus powers to heal him and his horrible leg. And it smells terrible and the dogs are always bothering with it!

Carley: Hey, you know, sweetie, Jesus did grow up. You don’t always have to call him “baby.” It’s a bit odd and off-putting to pray to a baby.

Ricky: Well, I like the Christmas Jesus best and I’m saying grace. When you say grace, you can say it to grownup Jesus, or teenage Jesus, or bearded Jesus or whoever you want.

Carley: You know what I want? I want you to do this grace good so that God will let us win tomorrow.

Ricky: Look, I like the baby version the best, do you hear me? I win the races and I get the money.

Cal: I like to picture Jesus in a tuxedo T shirt, 'cause it says, like, “I wanna be formal..."

Walker: I like to picture Jesus as a ninja fighting off evil samurai.

Cal: And singing lead vocals for Lynyrd Skynyrd, with, like, a angel band. And I’m in the front row, and I’m hammered drunk.

Carley: Hey Cal, why don’t you just shut up?

Ricky: Okay. Dear eight-pound, six-ounce newborn infant Jesus, don’t even know a word yet, just a little infant and so cuddly, but still omnipotent, we just thank you for all the races I’ve won and the 21.2 million dollars – woo!

Ricky: Love that money! - that I have accrued over this past season. Also, due to a binding endorsement contract that stipulates I mention Powerade at each grace, I just want to say that Powerade is delicious...

Ricky: ...and it cools you off on a hot summer day. And we look forward to Powerade’s release of Mystic Mountain Blueberry...

Ricky: ...Thank you for all your power and your grace, dear baby God. Amen.

Cal: That was a hell of a grace, man. You nailed that like a split hog!

Ricky: I appreciate that. I'm not gonna lie to you, it felt good.

Walker: Dad, you made that grace your bitch.

Carley: (to Walker and Texas Ranger) Hey, boys, I wanna see some napkins in the lap.

Ricky: Boys, how was school today?

Walker: I threw a bunch of grandpa Chip's war medals off the bridge!

Ricky: Sounds like a good day. Texas Ranger, how about you?

Texas Ranger: Well, the teacher asked me what was the capital of North Carolina.

Texas Ranger: She said, "No, you're wrong." I said, "You got a lumpy butt." She got mad at me and yelled at me and I pissed in my pants.

Ricky I'm so proud of you, boys. You remind me of me - precocious and full of wonderment.

Chip: I can't hold my tongue. These kids are my grandchildren, and you are raising them wrong. They are terrible boys.

Walker: Shut up, Chip, or I'll go ape-shit on your ass!

Texas Ranger: I'm gonna scissor-kick you in the back of the head.

Ricky:: Yeah! Turn up the heat!

Cal: Go on and get some, boys!

Texas Ranger: Chip, I'm gonna come at you like a spider monkey.

Ricky: Chip, you brought this on, man.

Chip: What is wrong with you?

Texas Ranger: Chip, I'm all jacked up on Mountain Dew.

Ricky: Whoo-hoo, I love that!

Chip: You gonna let your sons talk to their grandfather like that? I'm their elder.

Ricky: I sure as hell am, Chip. I love the way they're talking to you. 'Cause they're winners. Winners get to do what they want. The only thing you ever done with your life is make a hot daughter. That's it. That's it! That is it!

Carley: We wanted us some wussies, we would've named them Dr. Quinn and Medicine Woman, okay?

Ricky: I worked too hard for your bull, Chip. Everyone just keep eatin'.

Carley: (to Ricky, lunging at him) Come here! I'm hot!

[She lands on him and they kiss passionately - and inappropriately.]

Cal: Alright! I'll hold your hair.
Posted by joe baltake at 9:00 AM

I agree, Joe - an absolutely amazing scene. Six years later, I'm still floored by it. Can't believe they had the balls to do it and pull it off - and that the target audience accepted it!

Wow that was strange. I just wrote an extremely long comment
but after I clicked submit my comment didn't appear. Grrrr... well I'm not writing all that over again.
Regardless, just wanted to say excellent blog!