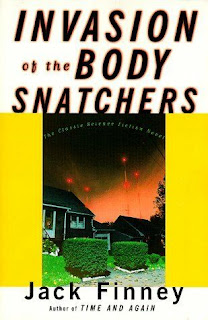 
When I first read Jack Finney's "Invasion of the Body Snatchers" in novel form a lifetime ago in 1955, it seemed a natural for movies, specifically a B-level black-&-white movie, the kind that Hollywood produced also a lifetime ago - the tale of curious seeds that grow as people sleep, replacing the human form. Finney (1911-1995) originally wrote the piece - set in his (and my) beloved Mill Valley, California - for Colliers Magazine in 1954. Then came the movie. Enter Don Seigel who made just such a modest fifties-B-film classic some 63 years ago. Perfection. It remains so. It remains inimitable. 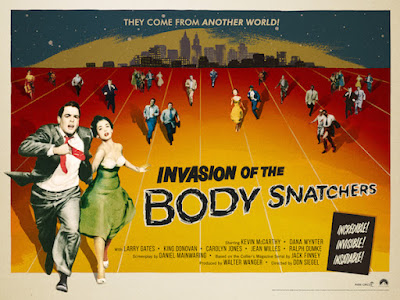 There was no need to tamper with or remake the material, rebooting of course being Hollywood's wont. Enter Philip Kaufman. It's 1978. Another version, also a California-set thriller. Almost as classic as the original. 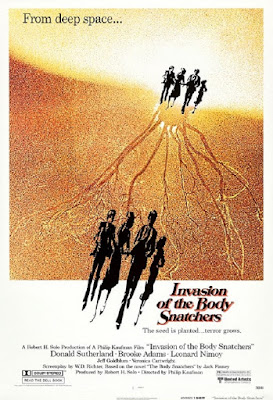 It's 1993 now and Abel Ferrera, the king of New York raunch, brought just that dubious quality to Finney's narrative and - guess what - it worked! 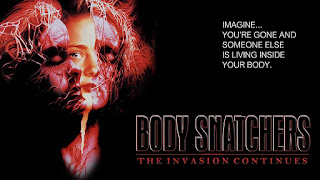 Yet another. The playwright Oliver Hirschbiegel whipped the material into a surprisingly credible indie in 2007. Unusual but hugely watchable. 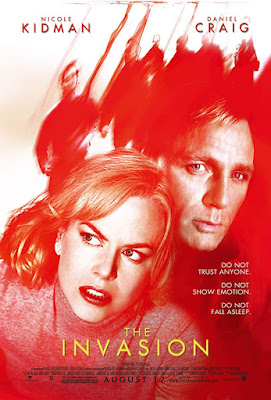 In short, this fabulous material is surefire as the stuff of movies.


~The various incarnations of an effective invasion, poster-wise

Joe- Great reading your posts. I’m also a fan of the first two versions - didn’t even know about the last two, and now want to see them!

You're a lot more generous than I am. I find the Kaufman pretentious in the extreme, the Ferrara unwatchable and the fourth...well, I never bothered. I imagine the fifth, whenever it comes, will be even worse.

What can I say, Mike. I guess that I find the material so intriguing and watchable that I’m a sucker for any version. I wouldn’t say that I am generous. Just an easy touch. -J

The second version scared the bejeezus out of me when I saw it 30 years ago. The first one looks exactly right, and has the right claustrophobic feel, although the actors aren't as lively as in the second version. The others I've missed.

I am a huge fan of Jack Finney, though. His "Time and Again" would be my choice for a book that would make a terrific movie, or perhaps a limited series for HBO, Netflix, etc. (Finney died in 1995, by the way, rather than in 1955.)

Bill- Finley also wrote the book on which “Good Neighbor Sam” is based. -J

P.S. Correction has been made, re the year of Finney's death. Thanks for the heads-up. -J

Did not know that about "Good Neighbor Sam." Someone should show that with the original "Invasion of the Body Snatchers" as oddly effective comment on post-World War II suburbia.