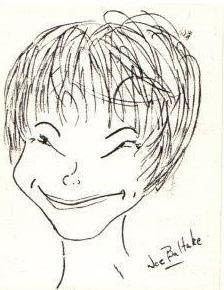 I suppose that the "movie-star crush" is something of the distant past, a phenomenon of the 1950s and '60s experienced by some little boys (and a few girls) who were fated to become movie nerds in their adult lives.

Marilyn Monroe comes immediately to mind as the most popular object of affection among children back then, even if they had no appreciation of exactly why. My theory is that Marilyn came with an innate child-like quality that made her seem like a peer, despite her physically adult, womanly attributes. She was an innocent. She had no plots or designs.

But my personal crush was Shirley MacLaine. I was so enamored of her that, when I was about 11 or 12, I devoted my budding artistic skills to a little pencil caricature (see above) that, I thought, captured her appeal.

Fast forward several decades and I am a working movie critic. I spent 35 years reviewing and, occasionally, interviewing film people. Hundreds. But, somehow, never Shirley MacLaine. Never. But I finally met her in 1991 when Jack Lemmon was honored by the Hollywood Foreign Press with the Cecil B. DeMille Life Achievement Award at the Golden Globes that year. Jack and I were friends and I was invited to join in the celebration.

Connie McCauley, who served as Jack's career-long secretary and assistant and was vice president of his Jalem Productions, arranged the seating at Jack's table. Jack was with his wife Felicia Farr and, among the other guests, were Walter Matthau and his wife Carol Matthau (aka, Carol Grace and Carol Marcus and who had just written the fabulous autobiography, "Among the Porcupines"), their son Charlie Matthau and his wife Ashley and ...  Shirley MacLaine! Whom Connie sat next to me.

She appeared to be attending with either her agent or manager.

Shirley smiled and said hello - and then studied me with a steely gaze. A pause. "Didn't we work together on "Madame Sousatzka"? In retrospect, I probably should have said yes and engage her in a one-sided conversation about the 1988 John Schlesinger film. She would do all the talking and reminiscing. Opting for honesty, I said no. "I'm a friend of Jack's." 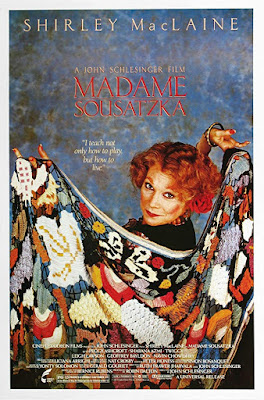 I turned to my wife Susan, who was sitting on the other side of me, planning to introduce them. When I turned back, almost a split second later, Shirley was gone. Her agent/manager was now in her seat and he sheepishly explained that Shirley needed private time to prepare her notes for the presentation. And Shirley? She was now sitting with Carol Matthau.

Oh, well. What can I say? Needless to say, it was a disappointment. Huge. Perhaps she thought that we'd have nothing to say to each other, And she probably would have been correct. Or - dare I admit it? - I simply wasn't important enough for her company. Either way, it seemed like bad form.

When Susan and I got home that night, I immediately logged on to "Madame Sousatzka" on IMDb to see what part I could have played. Had I been better versed on the film, I could have said yes to Shirley - that we did work on a couple scenes in the movie. I just needed a name. "I could have played 'Ronnie Blum'," I thought, oblivious to the fact that my decades-old crush, decidedly one-sided, was over. Goodbye, Shirley.

Loved this little tidbit, Joe. It’s fascinating to see someone without wearing any make-up.

Before I noticed your signature, I was looking for a "Nina" in MacLaine's hair.

I love your sketch, Joe. I thought it was Hirschfeld at first glance, as well. I also had a crazy crush on Shirley after seeing Some Came Running at the Music Hall in 1958, followed quickly by Ask Any Girl. The Apartment sealed the deal, of course. I crossed paths with her at the Lincoln Center Tribute to Billy Wilder in 1983. She interrupted my conversation with Wilder and his wife Audrey without a word of apology. It was Wilder who said, "Excuse us, please." I was disappointed to discover that Shirley was actually Ouiser Boudreaux, not Fran Kubelik. There was a recent interview with her in the NY Times where she was constantly asking the interviewer what he thought of her - a textbook case of narcissism.

Kevin- I've been long fascinated by the fact that Shirley, still a great actress, went from playing victims so well to playing victimizers with equal ease.

You're spot-on about MM. Her scenes with that kid in "Gentlemen Prefer Blondes," "Foghorn" Winslow, attests to this. They made a believable team - two kids,

Ah, the dangers of meeting your idols (and finding feet, not just of clay, but stonecold concrete)! That's why i've become a little jaded: if i meet someone and they turn out to be "nice", well, that's icing on the cake. But i don't expect it! Some people turn out to be so nice (friendly, charming, affable) that, even if i wasn't a huge fan before, i'm utterly enthralled after. (Peter Fonda is the huge example, and when he died, a lot of my friends shared that they had a similar experience.) But a lot of people are just horrors, and you begin to wonder how they can fake any normal human emotions when they're so extraordinarily inhuman. Nobody is all things to all people. Two classic examples: Barbara Stanwyck. She had a reputation for being such a fine sport and beloved by all the people she worked with. Well: yes. The crews on her movies and TV shows, and all the men. BUT on many of her movies, the women were treated very badly. When friends of mine worked on her tribute at the Film Society of Lincoln Center, they were shocked when they tried to get some WOMEN co-stars to pay tribute. With a few exceptions (such as Linda Evans, from THE BIG VALLEY), most of them demurred, and a few of them said why, detailing how Stanwyck had done things to undercut their parts, etc. (Geraldine Brooks, who worked with Stanwyck on CRY WOLF, thought that her career was over when WB then cast her in POSSESSED with Joan Crawford - she thought, if Stanwyck can be so cruel, what would happen with Crawford? But Brooks said, Crawford was perfectly professional, and even helpful. Brooks' experience was substantiated by several other people, like Maureen O'Sullivan, who worked with Stanwyck on ALL I DESIRE.) And Diane Keaton has tried to build a reputation for being such a "nice" person, but early in her career, she was noted for her ruthlessness in pursuing roles. And i mean ruthlessness: she did a number of things to hurt people who she felt stood in her way. So you never can tell. BUT does that mean that it changes how you feel? With actors, it's always hard because actors depend on how you respond to them. (And yes, Shirley MacLaine is a classic example, who has only gotten worse with the years. By the end of the 1960s, she literally cut off a lot of people, including Billy Wilder, because she felt that they weren't giving her enough credit. And she started to badmouth him in interviews, saying how she felt he ignored her on the sets of THE APARTMENT and IRMA LA DOUCE, how he favored Jack Lemmon, and she was glad to be out of that boys' club.)

Joe, I have an autographed picture of Shirley, written specifically to me (Marvin). I love Shirl. She was so nice to sign that picture of her for me.

hey, you've got a hidden talent with your sketch of Shirley MacLaine....now you an do one for me of Sinatra worthy of hanging it on my wall of my Sinatra shrine......
check your mail soon.....