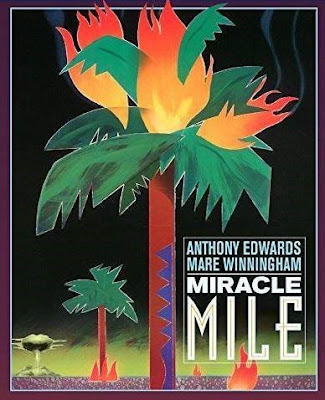 That name has haunted me for the past 30 years. Could it really be 30 years since I first saw "Miracle Mile"? Steve DeJarnatt wrote and directed this rapturous film and, as a working movie critic, I always wanted to meet him. But he's remained teasingly elusive for the same number of years.

"Miracle Mile" is DeJarnatt's second film, a follow-up to his debut feature, "Cherry 2000," of 1987. It is also the last theatrical film that he directed before heading into television where he apparently worked until 2006.

I couldn't even find a photo of him for this essay. Yes, elusive is the word.

"Miracle Mile," if you are among the uninitiated, is drop-dead beautiful and with an intense sense of style that's matched by its excellent, legendary script. DeJarnatt's original screenplay, which he wrote in 1978, was chosen in by American Film magazine in a 1983 issue as "one of the 10 best unmade scripts." And it remained unmade for another five years.

Its originality and lack of compromise must have frightened Hollywood because DeJarnatt spent the next decade working on other people's films.

DeJarnatt made his directorial debut with the much-touted premiere episode of the "Alfred Hitchcock Presents" revival - "The Man From the South," starring John Huston, Melanie Griffith, Steven Bauer and Tippi Hedren - and then made his big-screen bow directing Griffith in "Cherry 2000" (which was delayed and barely released theatrically by Orion).

In the meantime, he persisted and finally persuaded John Daly of Hemdale to let him make "Miracle Mile." And his small movie is just about perfect.

DeJarnatt's plot is a boy-meets-girl romance that's threatened to be aborted by a nuclear catastrophe. And the situation that cleverly sets it all in motion is what happens when the wrong person answers a phone.

Harry Washello (Anthony Edwards) is a traveling jazz musician (he plays the trombone) - single and shy - who meets the woman of his dreams in a natural history museum near the La Brea Tar Pits in L.A. 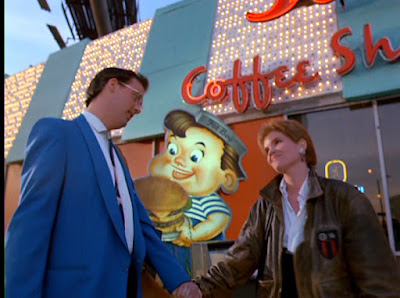 Julie Peters (Mare Winningham) is a waitress who works the night shift at Johnie’s Coffee Shop, a 24-hour diner in the Park Brea district. (The movie's title comes from the famous strip along Los Angeles' Wilshire Boulevard that connects the preserved fossils of the tar pits to the area's contemporary skyscrapers, and Johnie's, now gone, was fabulous.)

Anyway, they make plans for a big date - at one in the morning, after Julie gets off from work. Well, Harry gets there three hours late - Julie, brokenhearted, is long gone, having headed home to sleep off her depression, with the help of some pills. How Harry manages to stand her up provides a good example of the movie's details and ricocheting quality: He's on the balcony of his apartment, smoking, when he flicks away his butt. A pigeon picks it up and takes it to the electrical wire where it's nesting. A fire breaks out, blacking out Harry's apartment and thereby cutting off his alarm clock. Hence, he's three hours late for the date.

Harry is about to call Julie on the pay phone outside Johnie's when ... it rings: The voice on the other end is calling from a North Dakota missile silo. He's hysterical and has obviously misdialed. He wanted to talk to his father, to apologize for something and to warn him that the base's warhead has been locked into countdown: "We shoot our wad in 50 minutes!"

Then there's the sound of a gunshot and another voice comes on.

"Forget everything you just heard."

In a scene reminiscent of the one in Hitchcock's "The Birds," Harry tries to tell Johnie's motley assortment of night crawlers - a transvestite, two truck drivers and a yuppie stockbroker named Landa, who is speed-reading "Gravity's Rainbow" - what's about to happen. Is it real or a sick joke? 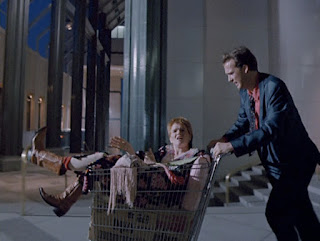 Landa (Denise Crosby, granddaughter of Bing), who happens to know the right people, makes a phone call and learns that a state of readiness is in the works.

Incredibly, she lines up a helicopter to transport everyone to where the air apparently will be clear of radioactivity. But if he's only got a little time left, Harry wants to spend it with Julie and embarks on an impetuous, romantic chase to find her.

For this moment, DeJarnatt comes up with another zany touch: Julie is still in a deep sleep, zonked out, and so Harry just plops her in a shopping cart and races through a deserted, very noir-ish L.A. in the dead of night.

"Miracle Mile," with its ripe camera work (courtesy of Holland's Theo Van de Sande), is over-the-top filmmaking, all twisty and quirky and bizarrely funny - like a fever dream. And visually, it's like a love poem to a very special time - the hours between darkness and dawn, as neon signs blink on/off and the morning light gradually seeps through buildings and alleys. 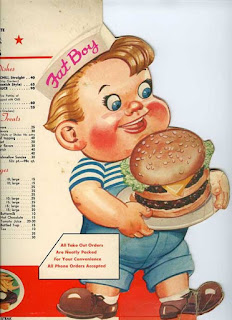 The film, released briefly on VHS, went full circle. It disappeared and was forgotten again - and only half-remembered - until it surfaced on DVD in 2015. To paraphrase a line from Ernest Dowson's poem, "Miracle Mile" emerged "from a misty dream, for a while, and then closed, within a dream." I'm glad it's back. But where, oh where, is Steve DeJarnatt?

Note in Passing: The title of the Dowson poem is, of course, "The Days of Wine and Roses."

~The "Fat Boy" logo for the legendary Johnie's

I remember this as an incredibly romantic and dark movie. What would you do if the world was coming to an end?

"The film, released briefly on VHS, went full circle. It disappeared and was forgotten again - and only half-remembered - until it surfaced on DVD in 2015."

Believe it or not, MGM issued MIRACLE MILE on DVD in 2003. It is still listed as available on Amazon.

Although a lot of people complained about the DVD as the film was released full frame. Apparently the elements weren't available to make a widescreen version. So, for that reason, it is forgotten.

Thanks! Obviously my research skills leave a lot to be desired. Am I wrong to think that MGM released the DVD under the radar?

On more question: Does DeJarnatt do commentary on it or is it one of those no-frills deals?

While I haven't seen it, I believe it was just the film with no extras. And yes, it was released very quietly, with no fanfare, in a week with several other releases. MGM used to release a lot of back catalogue like that. Now, they have really slowed production.

Miracle Mile was once available on demand. Maybe it still is. I watched it through my Wii, courtesy of a Netflix app. My husband, who'd seen it when it first came out, got very teary eyed again.

I watched it a year and half ago. Highly recommend it for the fans of eighties-style movies. I loved that it starts out as your independent '80s movie about a guy who misses a date with the girl of his dreams and then, 20 minutes in, it turns into a full-fledged thriller about a Russian plan to bomb L.A.

I haven't seen the film in ages, Charlotte, and I saw it only once - but, yes, I have a vague recollection of John Goodman and Jeff Bridges filming a scene there.

It's was also available to buy or rent on iTunes.

Great movie — deserving of its cult status — and it's long-held reputation prior to production as as one of Hollywood's great unmade scripts.

On the other hand, it's harrowing viewing, and perhaps one of those movies — like Cannibal Holocaust — that only need to be seen once.

Joe: My husband and I saw Miracle Mile about a decade ago at the New Beverly in L.A. And De Jarnatt was there! At the showing, he said the full-frame DVD is the only one that has ever been issued and that there was no new edition planned - at that time.
We watched again recently on BluRay and it has not lost any of its oddball power.
The movie really holds up dramatically and, especially, as a time capsule of an L.A. that is now 30 years past. It seems already so strange and different. Or maybe it's just that deserted nighttime feel of the film...

I was at that same screening. I chatted with DeJarnatt briefly and found him quite amiable. If he was bitter that his career never took off, he did a good job of hiding it.

Hey - thanks for the support for my film. (somebody sent me a link to your article )

Kino Lorber Classics - put out a much much better Blu Ray (and DVD) in 2015 - than the original crappy one.

Big following in France with a French Blu Ray from Blaq Out ( . Turbine in Germany also, and Arrow Films in the UK )

hope to have a website up for things -- next year - and some 30th Anni events...