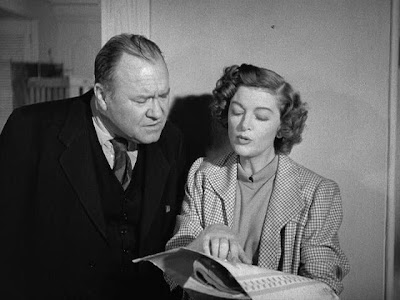 The scene: Muriel Blandings (Myrna Loy) going over color schemes with Mr. PeDelford (Emory Parnell), a contractor working on her house-in-progress, and Charlie (Don Brodie), a painter who will do the work...

Muriel: "I want it to be a soft green, not as blue-green as a robin's egg, but not as yellow-green as daffodil buds."

Muriel: "Now, the only sample I could get is a little too yellow, but don't let whoever does it go to the other extreme and get it too blue. It should just be a sort of grayish-yellow-green."

Muriel: "Now, the dining room. I'd like yellow. Not just yellow; a very gay yellow. Something bright and sunshine-y. I tell you, Mr. PeDelford, if you'll send one of your men to the grocer for a pound of their best butter, and match that exactly, you can't go wrong!"

Muriel: "Now, this is the paper we're going to use in the hall. It's flowered, but I don't want the ceiling to match any of the colors of the flowers. There's some little dots in the background, and it's these dots I want you to match. Not the little greenish dot near the hollyhock leaf, but the little bluish dot between the rosebud and the delphinium blossom. Is that clear?"

Muriel: "Now the kitchen is to be white. Not a cold, antiseptic hospital white. A little warmer, but still, not to suggest any other color but white."

Muriel: "Now for the powder room - in here - I want you to match this thread, and don't lose it. It's the only spool I have and I had an awful time finding it! As you can see, it's practically an apple red. Somewhere between a healthy winesap and an unripened Jonathan. (There's commotion in the background.) Oh, excuse me..."

Mr. PeDelford: "You got that, Charlie?"

-written by Melvin Frank and Norman Panama, from the novel by Eric Hodgins. 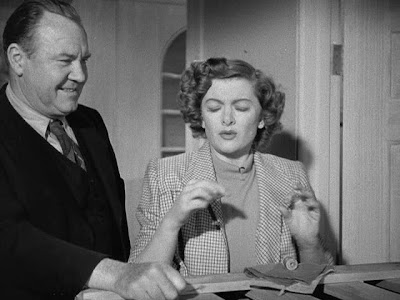 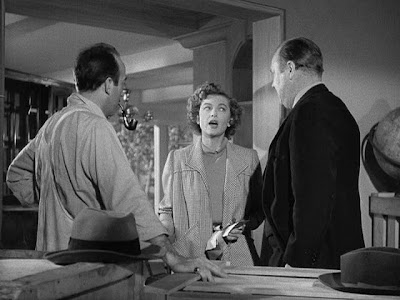 Absolutely my favorite scene in an inexplicably undersung film, although the daughter's school essay in the first scene with dialogue is pretty good as is the wordless opening scene withe the family waking up.

Yes, that opening scene is a gem, brilliantly directed.

I adore this movie! I think my love for Myrna Loy started here.

Enjoying your work, as always! You certainly have been testing my memory lately! Thanks for the exercise!