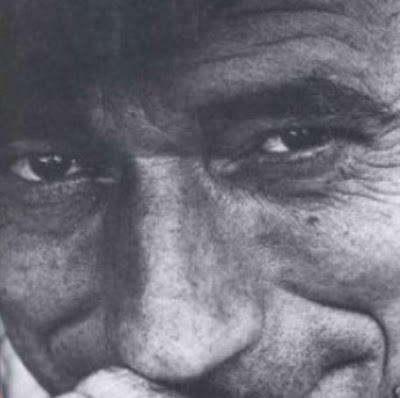 Jacques Demy's last (live-action) movie and one of the final films of Yves Montand, made three years before his death, 1988's "Trois places pour le 26"/"Three Tickets for the 26th," is something of a secret gem.

Inexplicably, it has never been shown in the United States, particularly given that Montand's co-stars are Françoise Fabian and Mathilda May.

Very much a burst-into-song, MGM-style musical that Demy loved (and appropriated), "Trois places" is also something of a fictionalized biopic of Montand who plays himself as he prepares for "Montand Remembers," the show-within-the-film, and reminisces about his life and career while rehearsing. There's an apt vérité quality to Jean Penzer's cinematography.

Watching it, one is struck by just how much Montand was the French equivalent of Frank Sinatra, a solid actor who was also a first-rate song-and-dance man. Few Americans realize that, even though Montand sang in two American films - George Cukor's "Let's Make Love" (1960), a movie that was overshadowed by the notoriety of Montand's affair with Marilyn Monroe during the production, and Vincente Minnelli's "On a Clear Day You Can See Forever" (1980). 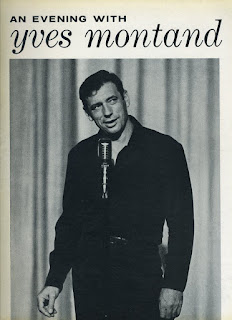 But even more relevant to "Trois places" is the one-man show, "An Evening With Yves Montand," which opened to ecstatic reviews on Broadway at Henry Miller's Theater on September 22nd, 1959 and whose limited two week run was extended and played for 42 performances.

Montand would appear in two more films - Jacques Deray's "Netchaïev est de retour" (1991) and Jean-Jacques Beineix's "IP5: L'île aux pachydermes" (1992), both released after his death. He died on the set of the Beineix movie on its last day of shooting in 1991, after filming his final scene.

As for Demy, the same year he made "Trois places," he also collaborated with cartoonist Paul Grimault on "La table tournante"/"The Turning Table," an animation about a clown who visits Grimault - the clown being the star of Grimault's movie "Le Roi et l'Oiseau." Their conversation is laced with clips from other Paul Grimault films. Demy died two years later in 1990.

Note in Passing: I long had a fantasy of a remake of "South Pacific" - with Yves Montand as Emil De Becque. Well, one can dream, right?

~Playbill for "An Evening with Yves Montand"
Posted by joe baltake at 10:30 AM

Agnes Varda has done such a champion job keeping alive the Demy legacy that I'm surprised that she never orchestrated a U.S. release of "Trois Places." Was it badly received in France?

I saw this film when it opened in Paris. It was not top-grade Demy - the critics sort of shrugged - but it was easy to watch and I enjoyed Montand's flirtatious interplay with Mathilda May.

The film was not a success, not necessarily because it was bad but Demy has become unfashionable by then. It happens

"Trois places pour le 26" is included in "Integral Jacques Demy", the 12-disc DVD set distributed by Arte Video. It's available only in France as a Region 2 DVD release and, of course, everything in in French with no subtitles, including the commentaries and documentaries. But all the films look good, having been lovingly restored.

Certainly, many Demy movies have carried the spectator along more through music than any clear train of events or logically ordered emotions, but I like how he used songs that stopped and started, stuttered and repeated themselves. He made music very organic to his work.

Demy was already very ill when he made TROIS PLACES, and Montand was not in the best of health either. So that accounts for some of the slackness in the movie. Yet it is very charming, and a fitting tribute to Montand.

One (true) story: the female lead was supposed to be Delphine Seyrig, but Montand objected. He had heard (from Joseph Losey) that Seyrig was a very vocal feminist, and so he asked that she be replaced with Francoise Fabian. Because Montand was the box office draw in terms of the project, Demy relented. Seyrig was very hurt by this, especially since she had been a close friend of Simone Signoret's. But Montand wanted to have his own way.

Thanks, Daryl. Invaulable info, as always. I've heard some hard-edged, old-world chauvinistic stuff about Montand, so his stance on feminism doesn't surprise me. "Slack" is a discreet word to describe "Trois Places." I still find it charming but I also always thought of it as an old-man's film made by a (relatively) young man. Maybe that's why it's charming.

ALEX is wrong. the 12 dvd arte video collection has english subtitles for all but one film.

Thanks for the clarification, Kent. And thanks to Alex for alerting me to the boxed set in the first place. -J

Joe- I like your idea for "South Pacific" with Montand. I guess you seeing it being made in the 1970s-early '80s. If so, given the time, for the female lead, I would suggest Michelle Pfeiffer,

I saw Montand once at the Olympia and frankly, I never understood why Simone Signoret put up with him. He was so much in love with himself. Anyway, he lived in a wonderful time for French film and theatre. k.