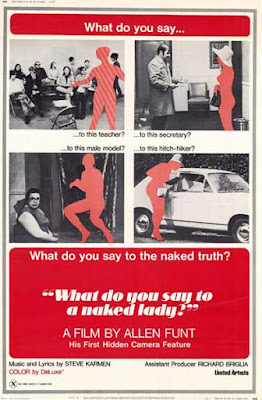 So during my first few weeks in Philly, I found myself sitting across the aisle from my friend Ernest Schier of The Philadelphia Bulletin, watching things with titles like "Meatballs" (starring the ubiquitous Harry Reems) and "Sweden - Between Heaven and Hell." Ernie would snort comically through these movies (that's when he wasn't snoring) as I wondered how the hell I was going to construct a credible review of what I was watching.

Anyway, all this is in preamble to my recollection of the most curious Hollywood X movie of all - Allen Funt's "What Do You Say to a Naked Lady?," which opened in Philadelphia on Wednesday, March 11th, 1970 and at one-half of a twin called The Duke (the other being The Duchess), at 1605-1607 Chestnut Street. (Thanks to reader Jimbo for the heads-up.) 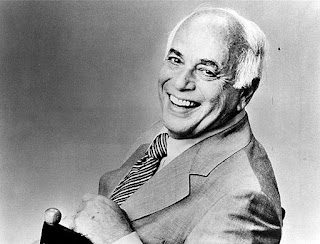 Funt was like a family friend or relative at the time, due to the popularity of "Candid Camera," a novel idea which he expanded with  "What Do You Say to a Naked Lady?," the first of only two movies that he made during his long career.

The idea behind the film is Funt's curiosity about the public's true feelings about X-rated movies. He approached this question by making an X-rated film himself. Funt took advantage of the new permissiveness of the era, employing nudity from every possible angle, including full-frontal. And his shots aren't stingy but lengthy. His film leaves nothing to the imagination as his hidden cameras leer at naked bodies and attitudes towards sex.

But most of the film is about Mr. and Mrs. American being confronted by naked strangers in office buildings and on city streets and even highways. 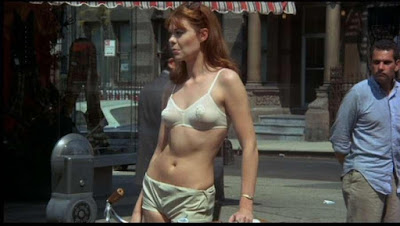 After the film opened, Funt visited Philaldephia to promote it and I joined him for breakfast at a hotel called the Warwick, worried that I would also be caught in the act of being myself. It was one of my most satisfying interviews, with Funt being absolutely candid (no pun intended) as he noted how unhappy he was that his movie was being sold as "a Candid Camera film by Allen Funt." "Trademarks can hurt you," he shrugged.

And he talked enthusiastically about future movies that he never made - one a documentary following children as they age from two to five (shades of Richard Linklater here) because "children lose their innocence during this period." Another was a narrative about "ghetto furniture dealers who keep their poverty-stricken patrons in debt, with one merchant teaching his son the tricks of fraud by filming, Candid Camera-style, actual hoodwinking transactions." Funt's passion was transfixing.

While Allen Funt would go on to make a second film, the 1972 PG-rated hidden-camera documentary, "Money Talks" (about how people, including celebrities, relate to money), I've no idea why he never got to make the two that he described so enthusiastically, but they seemed promising to me and I felt compelled to share these missed opportunities with you today. And re-reading my "Lady" review and interview with him, I also feel this yen to experience Funt's little film again,arguably the most curious X-rated movie ever made. And perhaps even the most relevant.

~One-sheet movie poster for "What Do You say to a Naked Lady?"

~One of the more discreet shots in "What Do You Say to a Naked Woman? (the only kind newspapers and magazines could run)

Thanks for the heads-up! Never heard of it before. Not available on DVD. Will keep an eye out for it.

THE LAST OF THE MOBILE HOT SHOTS? I have never seen that. And I had no idea that it was directed by my favorite director Sidney Lumet.

Actually, he DID make another movie: MONEY TALKS (1972), which was rated PG. The subject matter is self-explanatory.

Thanks (as usual), Mike! I vaguely remember that title. I probably reviewed it in another life. Still, I wish Funt had been able to make the films that he described with such enthusiasm. -J

Joe, don't hate me. But I liked everything about your blog, except for your discussion of that film.

I have never had any desire to see it (even after reading your blog). Didn't much like CANDID CAMERA, either.

What I liked most about the blog was your discussion of films that were originally rated X, and then trimmed (in most cases) to get an R rating.

BTW, it just occurred to me that you've done three consecutive posts about movies released by United Artists in 1970. Am I sensing a theme here? ;-)

Yes, I noticed that, too, belatedly. It must be a subconscious things, as the films released by U.A. when I was growing up had a huge impact on me. Warners is my favorite studio all around, but I've a special place for United Artists of the 1960s and '70s.

ha,ha,ha.a.......I remember seeing this movie and laughing a lot, especially the bit in the elevator

Ahhh... you bring back such memories! I remember seeing many movies at the Duke and Duchess movie theaters in Philadelphia. I even remember trying to sneak in to see “What Do You Say to a Naked Lady” with my cousin but we were both too young and they wouldn’t let us in without ID. The worst of the “bowling lane” theaters in downtown Philadelphia had to be the Eric Rittenhouse right across from the park. I remember seeing “The Graduate” there when it opened. It was so narrow it gave the impression of watching a film in a hallway corridor.

Jimbo! You've refreshed my aged memory. Yes, the Rittenhouse Twins were they bowling-alley shaped theaters on Rittenhouse Square. The Duke and Duchess were located on Chestnut Street in Philadelphia. Funt's film played on Chestnut at the Duke. Thanks for the (subtle) heads-up. -Joe