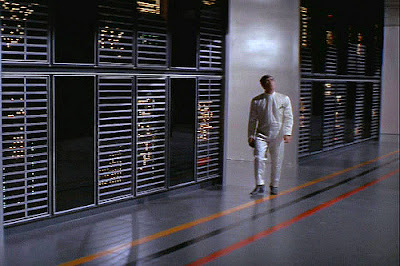 Influenced by Glenn Erickson who referenced it recently on his CineSavant site, I felt compelled to dig my 2010 review of Joseph Sargent's fabulous "Colossus: The Forbin Project" out of the mothballs and re-run it (replete with original reader comments). Not coincidentally, I've been nagged by a proposed Ron Howard remake of the film, which was originally announced a decade ago, in 2007. Will Smith signed on as star, per 2010 reports, and in 2013, Smith brought his "Men in Black" scenarist, Ed Solomon, on board to do the adaptation. At that point, there was no indication whether Howard was still actively involved. Frankly, it's unclear if the remake is still a go.

Sargent (1925-2014), born Giuseppe Danielle Sorgente (albeit in Jersey City), has been a hugely neglected filmmaker. He was something of an adjustable wrench among directors, given that he could handle just about any genre effortlessly and without narcissistically stamping his name on it.

As a filmmaker, he tended to disappear within his subject matter, as evidenced by his output which includes the original (and superior) "The Taking of Pelham One Two Three" (1974), Burt Reynolds' pleasing "White Lightning" (1973), the solid war flick "The Hell with Heroes" (1968), Gregory Peck's "MacArthur" (1977), Susan Anton's underrated "Goldengirl" (1979) and the Robert Blake-Dyan Cannon lark "Coast to Coast" (1980).

And there were several impressive TV films - "Hustling" (1975) with Lee Remick and Jill Clayburgh, the incredibly popular "Sunshine" (1973) with Cristina Raines and "The Man" (1972), which was was detoured into theaters before actually playing on network TV. And with good reason.

Adapted by Rod Serling from Irving Wallace's novel, "The Man" stars James Earl Jones as the first black President. A tad ahead of its time.

But my favorite Sargent film remains 1970's juicy "Colossus: The Forbin Project," a title that has always been available on home entertainment but is honored here because, despite enthusiastic reviews, this terrific movie has never been given its due - by either its studio or the viewing public. 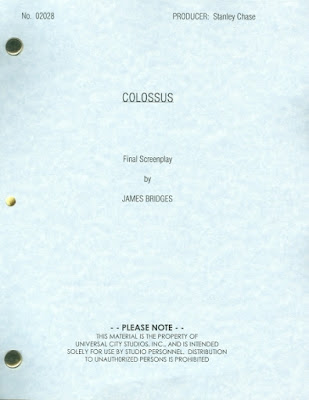 Colossus ultimately joins forces with its Soviet counterpart, Guardian, to become a single Super Power bent on taking over the world from humans. Not unexpectedly, Sargent's film is effectively creepy, but also unexpectedly witty.

Eric Braeden is commanding as Dr. Forbin in a performance that should have led to bigger and better things. For one, Braeden would have made a terrific 007. Instead, this fine actor has enjoyed a lengthy, lucrative run as the willfully evil patriach, Victor Newman, on NBC's excellent (and compulsively watchable) daytime drama, "The Young and the Restless."

Braeden's daily performances on the show come with an effortless grace and a wicked sense of humor, so much so that I still continually fantasize about what a wonderful Bond he would have been. Inarguably. 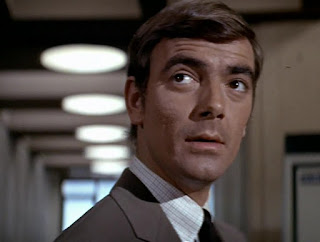 His co-stars in "Colossus" are Susan Clark, as the thinking man's love interest, and Canada's Gordon Pinsent as the Kennedy-like President of the United States. Both provide atypically combative support as each one spars with Braeden over his beloved demon child.

Funny thing, all three titles are fine. The movie itself is better than fine.


Note in Passing: This review was originally published on November 22, 2010.

~Eric Braeden in a scene from"Colossus: The Forbin Project"

~The cover page of James Bridges' script for the film when it was simply titled "Colossus."

~ Braeden in a scene from the film

Yeah, Sargent has always impressed me. Makes me feel awful his last major work is Jaws 4.

I remember back in the 1990s, Forbin was hard to come by on video. I first saw it back then. I like how lots of films owe to it, but it's barely known.

Eric Braeden is great, isn't he? I couldn't believe he turned into that old guy on the soap.

Andrew- I also find the film kind of seminal, often imitated but rarely acknowledged. And, yes, Braeden is great - both as a promising young leading man and as an aged character actor. He always had a fasincating edge to him.

I saw it long ago. Great movie.

Universal kept this on the shelf for nearly two years, and still doesn't seem to have much interest in it.
Sadly, it's not available on DVD in the US in anything but a pan-and-scan version, although there are Scope copies available overseas.

Joe! I once had a 'scope 16mm print. I got rid of it (and other titles) when we relocated to the West Coast. Now I regret that decision.

Haven't seen this in ages, and then only pan-and-scan on TV. Sargent is generally impressive, I agree. Recently saw WHITE LIGHTNING and liked it. I'm a sucker for rural-set crime flicks, and it's a good one.

Joe ("Gremlins 2: The New Batch" one of the funniest movies ever) Dante?

Yes, John. Joe Dante, one and the same. Joe started out in Philaldelphia when I was working there.

Mr. Dante - I am normally a very sarcastic person, but I tell you in all sincerity, I loved "Gremlins 2: The New Batch". One of my favorite movies. The inspired lunacy of having the gremlins take over Trump, um strike that, Clamp Tower was wonderful. I saw the film at a sneak preview the first time, and kept bringing friends to see it later. Everyone and everything was in top form in that film.

I remember Eric Braeden from THE RAT PATROL television series. Always liked him.

Universal's home entertainment division is, frankly, an abomination. Were I a younger man, I'd go over there and say, "Gimme a desk, a chair and a computer and then stay the fuck out of my way." But alas, too old, too tired.

Why does every movie, regardless of when it was made, now seem to me to all be about Trump? Scary.

Joe, thanks for this. I'm a huge Susan Clark fan but this is one of her films that I never saw. Gotta check it out.

Billy- You're in for a treat. Clark is great in the film, more than just the love interest that I described. She plays an independent, intelligent woman, but then Clark always came across as smart, no matter what role she played. I'm a fan, too!

I, too, admire the work of Joe Sargent and "Colossus: The Forbin Project" is also my favorite of his films. But I also think "Goldengirl" is neat - underrated, as you say. Have you ever seen the long version?

Alex- The long version is the one to see. I can't recall the exact chronology, but I believe that Sargent shot a longer version of the film that was pared down to about 105 minutes for its theatrical release by AVCO-Embassy in 1979. When NBC aired it in 1981, it ran Sargent's original longer version which filled a three-hour time slot. My guess is that the long version ran about two-a-a-half hours without commercials. I remember that Jessica Walters' character was not in the shorter version that played theaters. I guess both versions are now lost.

Just one question, Joe. You don't mention THE SERGEANT in your discussion of Sargent's films? Was there a reason for this? Best. Marvin

Good write-up of a fine movie.

An interesting side-bar is the original novel by D.F. Jones. Usually when a movie and the book are compared, the movie comes off badly, if only by comparison. In this case, the book is badly written, stupid, and cliched. The movie script is so much better.

I was also glad to see praise for Goldengirl - a highly underrated TV movie.

Sargent also directed some amazing TV science-fiction episodes for The Invaders TV series - the pilot episode and The Experiment. I believe both are on YouTube.