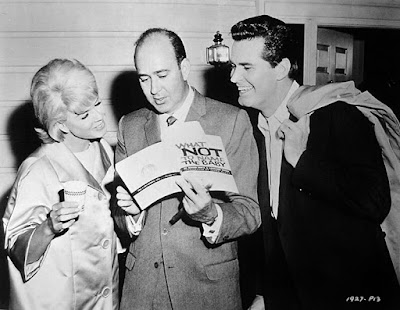 Back on October 14th, in an essay titled small screen, big screen, I celebrated those TV personalities who moved into feature films during the 1980s, seemingly in tandem, and who turned out some pretty impressive movies - among them, Danny DeVito, Penny Marshall, her brother Garry Marshall, Rob Reiner, Leonard Nimoy and, of course, Ron Howard.

In response, Mike Schlesinger gently reminded me that I had overlooked Henry Winkler, but my defense was that while Winkler did direct two (and only two) amiable features - Billy Crystal's "The Memory of Me" and Burt Reynolds' "Cop & 1/2" - his work did not have the impact of, say, DeVito's "The War of the Roses," Penny Marshall's "Awakenings," James L. Brooks' "Terms of Endearment" and "Broadcast News" or anything by Howard.

Mike's comment stayed with me and I thought about who else I might have forgotten. One name came to mind - Carl Reiner. True, Reiner predates his television peers by a good decade - he emerged as a film director in the 1970s - but he certainly deserved to be referenced in the piece as something as a trailblazer, one of the first to make the transition.


Reiner, who is now a spry 95, has a rich, enviable comic history in television, having worked with both Sid Ceasar and Mel Brooks. After these internships, he struck out on his own, with the invaluable help and support of producer Sheldon Leonard, and created "The Dick Van Dyke" show in 1961, the template for every sophisticated sitcom that followed. 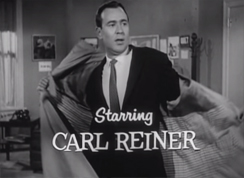 Not unlike several other sitcoms that became fabulous successes,"The Dick Van Dyke" show was an accident. Reiner had originally written it with idea of starring in it himself.

In a pilot film  titled "Head of the Family," produced in 1959 for CBS, he played the TV writer Rob Petrie and Barbara Britton and Sylvia Miles co-starred in the roles that would subsequently be played by Mary Tyler Moore and Rose Marie when Van Dyke, then a hit on Broadway in the 1960 stage version of "Bye Bye Birdie," came on board as the star.

Now a success on TV without being in anyone's shadow, Reiner moved into film, writing his first screenplay - the astute, acerbic jab at advertising, "The Thrill of It All" (1963), directed by Norman Jewison and starring Doris Day and James Garner (and featuring Reiner in a series of witty cameos). 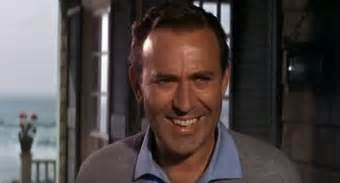 The same year, his semi-autobiographical novel, "Enter Laughing," was adapted for the stage by Joseph Stein and opened at Henry Miller's Theater on March 13th, 1963 with Alan Arkin in the lead role (playing Reiner's alter ego). This leads to a string of fascinating connections (or coincidences): Reiner would work with Jewison two more times - writing the script for "The Art of Love" (1965) and then acting for Jewison in the once-popular "The Russians Are Coming, The Russians Are Coming" (1966). One of Reiner's co-stars in "The Russians Are Coming..." - a hilarious all-star lark barely regarded these days - was ... Alan Arkin.

A year later, Reiner made his big-screen directorial debut with the film version of "Enter Laughing" (1967), another terrific comedy that's been unaccountably forgotten, starring José Ferrer, Elaine May and Reni Santoni in the role played on stage by Arkin. (Arkin looked youthful enough on stage but couldn't pass for a twenty-something actor on screen.)

Reiner wrote his own adaptation. Of course. 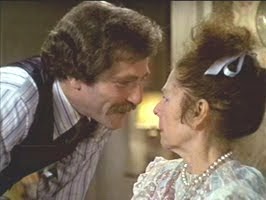 In 1969, he directed Van Dyke and Michelle Lee in "The Comic" (originally titled "Billy Bright"), a tiny, charming but ultimately forgettable vaudeville-based film, but a year later, in 1970, Reiner made something of a splash with "Where's Poppa?," an envelope-pushing comedy aimed  at the counterculture "youth" audience of the time. This was not your grandma's Sid Ceasar comedy, but it is close to the films that Mel Brooks would successfully make.

The subject of "Where's Poppa?," starring Ruth Gordon and George Segal as mother and son, was momism, and it was greeted with controversy when its jaw-dropping fade-out scene was deleted at the 11th hour, following a testy New York press junket. (The sequence was subsequently restored for home entertainment.) I attended the aforementioned junket and remember Reiner announcing to the media the morning after the screening that the scene in question was determined to be "offensive."

To which a joker in the crowd shouted, "The whole film's offensive!"

By today's (lowered) standards, "Where's Poppa?" would be rated PG. 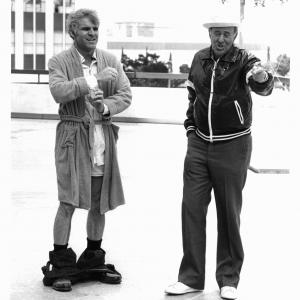 The film, which had its supporters and still has a cult following, put a damper on Reiner's movie ambitions. After that, he worked largely in TV again, although many years later, he directed the popular George Burns-John Denver film, "On God!" (1977), and  Henry Winkler's "The One and Only" (1978).

It took ten years before Reiner's film career would truly kick back into action. The movie was "The Jerk" (1979) and it was the first of a fruitful collaboration with Steve Martin. Suddenly, Carl Reiner was trendy. 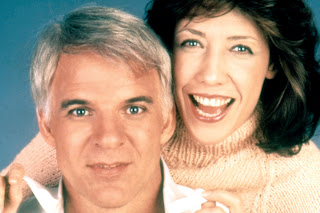 By now, those other directors from television were active and prolific, including his son, Rob Reiner. Having led the way (and having parted from Martin), Reiner started to slow down.

He directed an esoteric little film with the British comic, Robert Lindsay, called "Bert Rigby, You're a Fool" (1989) and a promising comedy with Kirstie Alley and Bill Pullman, "Sibling Rivalry" (1990) which seems to have the fingerprints of studio tampering. Its flaws notwithstanding, I like "Sibling Rivalry," as well as the last movie that Reiner has directed to date, "That Old Feeling" (1997), a refreshingly old-fashioned comedy that pairs Bette Midler perfectly with the much-missed Dennis Farina.

As an actor, Reiner was pleasing company, a quality that came through in the handful of films that he directed. He had a good run as a filmmaker and, now that he's seemingly returned to acting (Steven Soderberph's "Ocean's Eleven" trilogy), his friendly face is a most welcomed presence.

~Carl Reiner on the set of "The Thrill of It All" with stars Doris Day and James Garner
~photography: Universal-International 1963©

~Publicity shot of the writer at work
~photography: CBS 1960©

~Reiner on the set of "The Jerk" with Steve Martin
~photography: Universal 1979©

Thank you for the hat-tip. Having interviewed Carl on a number of occasions (one of them immortalized in the HBO documentary, "If You're Not In The Obit, Eat Breakfast"), I can attest to what a wonderful fella he is. I've often said that the greatest TV show ever ("Dick Van Dyke") and the greatest movie ever ("Mad Mad World") have only one man in common, and it's Carl. It's a shame he's never won an honorary Oscar, or worse, not received a Kennedy Center honor (especially as Mel got his ages ago). If there is anything like a true Renaissance Man, he is surely that man.

P.S.: If "Russians" is forgotten, it's not the film's fault. Carl appeared with it at the Aero a couple of years ago, and it holds up wonderfully (our current situation notwithstanding).

Yes, "The Art of Love," an evil, subversive little comedy. I'm not sure it works but it definitely shows a different side of Reiner.

Did you see that documentary, If you awake in the morning, eat breakfast? Or something like that. It’s about Reiner, Van Dyke et al who are still leading active and happy lives well into their 90s and beyond.

This column is so complete, considering Reiner is 95. He and, mostly, his son, are on the Bill Maher show a lot.
I first saw him in the ensemble pieces on Saturday night 9PM (late for me at the time) - "The Sid Caesar Show" with Imogene Coca, Caesar and Howie Morris. Great comedy. But, again, you bring up movies I've never heard of. "Where's Poppa?" I was traveling a lot in the 70s/80s. But unlike Harold and Maude which I saw over and over, "Poppa" is a blank. "Enter Laughing." Also a blank. And Henry Winkler directing a movies! Blanks. Last I saw of him was in a hotel TV in San Antonio where he was flogging reverse mortgages. But you gave credit where credit was due - and for such a LONG time. Chapeaux (as we say.)! k.