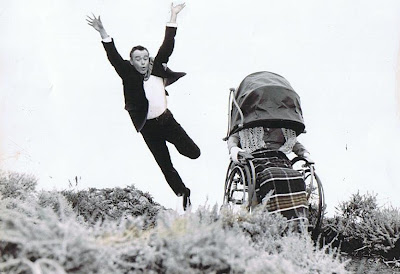 "Some Like It Hot" (1959) is probably the one comedy classic for which Jack Lemmon is best remembered. It was directed by one of his mentors, Billy Wilder, and it predictably tops every Best Comedies film list.

But Jack had another collaborator for whom he starred in comedies that were equally great (and undeservedly neglected) - Richard Quine.

Together, at their home base at Columbia, they made the superior musical "My Sister Eileen" (1955), the scrappy service farce "Operation Mad Ball" (1957), the bewitching "Bell, Book and Candle" (1958), the it-gets-better-with-age "It Happened to Jane" (1959) and especially the sophisticated "The Notorious Landlady" (1962), a playful, clever take on Hitchcock.

"The Notorious Landlady" is my preferred Lemmon movie (hands-down) and one of my favorite films in general. Its titanic supporting structure is, of course, its sceenplay - an incredibly literate affair penned by no less than Blake Edwards and Larry Gelbart, by way of British nutneggy Margery Sharp, who wrote the short story (originally published in the Saturday Even Post as "The Notorious Tenant") on which the script is based.

Quine's direction here is his most assured as he blends subtle comedy, snappy repartee and Hitchcock quotes with incredible, impressive ease.

One memorable scene follows another, the highlight of which is a comic chase staged at Penzance, the location of an elderly residence whose tenants are enjoying an open-air concert atop the forbidding cliffs.

Here is Jack in a selection of shots bounding through the air in the film's climatic and wonderful chase sequence, which Quine and composer George Duning set to selections from - what else? -  "The Pirates of Penzance" and other Gilbert and Sullivan goodies. "Take me back before I miss "The Mikado!," the wheelchair-bound Estelle Winwood snaps at her nefarious caregiver, Phileppa Bevans, before Winwood is pushed down a rocky hill.  The scene makes me want to jump, tumble and fly, too. Enjoy! 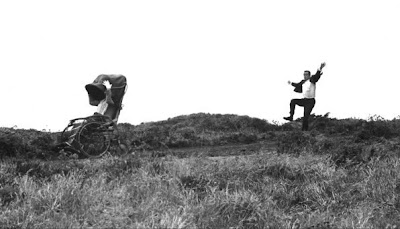 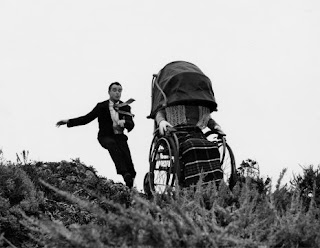 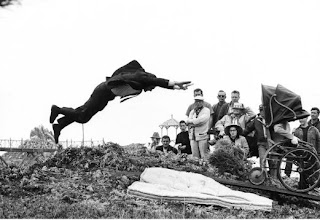 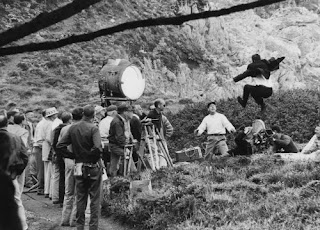 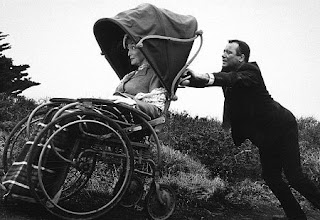 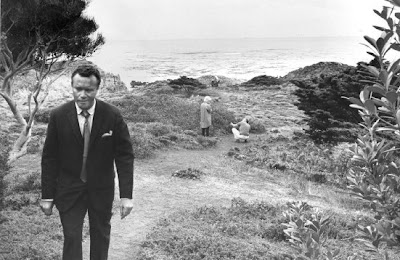 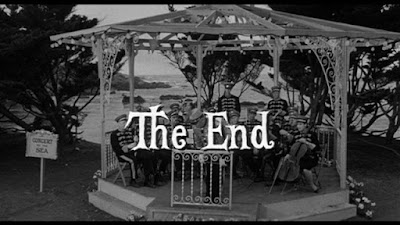 Note in Passing: Richard Quine directed Jack Lemmon's screen test when Jack was hired by Columbia and put under contract by Harry Cohn and, along with Wilder, Quine was a Best Man at Jack's wedding to Felicia Farr in Paris in 1962, the year "The Notorious Landlady" was released. Kim Novak, Jack's co-star in "The Notorious Landlady" and Quine's muse, also attended the wedding. Wilder and Lemmon were in Paris at the time, with Shirley MacLaine, filming exteriors for "Irma La Douce" (1963).

~Jack Be Nimble - Lemmon doing his own stunt work in "The Notorious Landlady"
~photography: Columbia Pictures, 1962©
Posted by joe baltake at 4:24 PM

As Estelle Winwood says at the end of this great scene, "We-e-e-e!" Can't wait to see this gem again.

I'll be enjoying Landlady on the big screen (my new TV!) this Sunday night. I just found a DVD of it.

another highly watchable film. I especially like the Lemmon/Astaire scenes at the Embassy where no one seems to do any actual work.

You forgot HOW TO MURDER YOUR WIFE, another Quine directed and too often underrated comedy with Lemmon.
George Axelrod who wrote THE MANCHURIAN CANDIDATE wrote this as he did PHFFFT, the first of three movies Lemmon played in with Kim Novak. Also starring Judy Holiday, it is very funny but I really love Lemmon and Holiday in Jack's feature debut released earlier in the year, IT SHOULD HAPPEN TO YOU, with Garson Kanin writing and George Cukor directing. He was paired with Ernie Kovacs three times.
While he had string of hits and then flops with Billy Wilder, his only film with Blake Edwards was the serious THE DAYS OF WINE AND ROSES. I bring this up because I have theory that Blake Edwards wanted to make Wilder movies with a series of films that seemed to inspire him---but that is a story for another day.

I met Lemmon at least three times. At 14-years-old I got to go on the set of UNDER THE YUM YUM TREE and he was nice enough to chat with me. By the way Kovacs' wife, Edie Adams was in that film and Ernie was on the set---it was because my mother's best friend went to acting school with Kovacs that we got to be there.

In 1990 I traveled to Moscow with the San Francisco Jewish Film Festival and we crashed an elite Academy Awards live broadcast party where a Russian choir sang "Somewhere Over The Rainbow" via satellite to the rest of the world and then Lemmon co-awarded the Best Foreign Film with LITTLE VERA star Natalya Negoda. Backstage we chatted and he said he was kind of nervous because almost nobody spoke English and he was worried he would do the wrong thing
.
And then in 1993 he was at Showest (the theater owners convention) for a Lifetime Acheivement. When I found out I would be invited to a private reception with him, I started trying to find anything he could sign. There weren't nostalgia stores but I found a still from SOME LIKE IT HOT. As he signed it he said, "Will I only be remembered for being in drag." At home I had original posters for many of his movies but I could not get them shipped to me in time.

Thank you for this. I've always felt that Quine was among the most underrated of great American directors, and did my best to push his films while at Sony.

For Mike Schlesinger- No, thank you, Mike. Quine was great and criminally overlooked by critics who should know better. In his DVD review of Quine's "The Moonshine War" for The New York Times, J Hoberman broke my heart when he wrote, hanging on to Andrew Sarris’ coattail:

"Adapted by Elmore Leonard from his novel, 'The Moonshine War' was directed for dark comedy by Richard Quine, a minor auteur described by Andrew Sarris in 'The American Cinema' as 'an inoffensive imitator of his betters.'”

Hoberman lost me then and there.

To Gary Meyer: No, I didn’t really forget “How to Murder Your Wife.” Well, actually I did: I left it out on purpose. I wanted to comment on the Lemmon-Quine collaborations made at Columbia exclusively. (Also, full disclosure: I’m not crazy about the film, never was. For me, it’s the weakest of their collaborations.)

Yes, Jack was terrific. I swear, every studio press rep replied “Jack Lemmon” when I asked who was the nicest movie person with whom they dealt. Always Jack. I started a communication with him when I was still a teenager and, about a decade later, I wrote a biography on his career, in which he was very much involved. These were the days before computers, so we corresponded via telephone and letters. I have dozens in which he sets me straight about certain facts and reminisces about his films and co-stars.

Joe- I remember Hoberman's negative reference to Quine in his "Moonshine War" DVD review and I was also disturbed by it. The remark seemed gratuitous to me,and he exacerbated matters by bringing a Sarris comment into the mix, as if to justify/verify his own opinion. I found it very petty and, more to the point, unnecessary.

Gratuitous. That's the word, Sheila. Thanks.


Mike Schlesinger beat me to what I was going to ask: Is Quine the most underrated American director? In addition to the six movies you mentioned, I'd add "Strangers When We Meet," a movie that took me totally by surprise when I came across it on TMC a few years ago.

Thanks, Bill. "Strangers When We Meet" may be Quine's best film, with a top performance from Novak. Yet it's rarely mentioned among either critics or movie buffs.