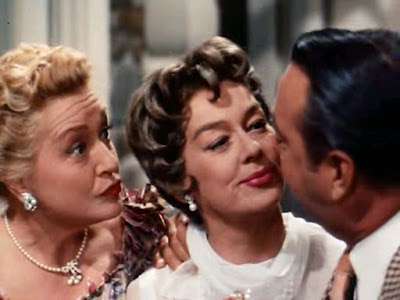 That incorrigible Liberal, Mame Dennis, trapped by arch Conservatives (and close talkers) Doris and Claude Upson who threaten to turn her beloved nephew Patrick into "an Aryan from Darien"

For my money, there are any number of memorable moments in Morton DaCosta's hugely entertaining film of his Broadway hit, "Auntie Mame."

Armed with a terrific script by Betty Comdon and Adolph Green (working from the stage original by Jerome Lawrence and Robert E. Lee) and abetted by his Broadway star, Rosalind Russell (plus the divine Coral Browne), DaCosta breezily swept his audience from one richly comic scene to another. There are umpteen of them in "Auntie Mame" and singling out one is near-impossible, but my hands-down favorite arrives late in the film when Russell's Mame Dennis pays a visit to her nephew Patrick's future in-laws, Claude and Doris Upson, at their Colonial-style manse in Mountebank (their signpost reads "Upson Downs"), described as being "right above Darien and completely exclusive and restricted."

"Exclusive to what and restricted to whom?," asks an annoyed, impatient Mame. Mame Dennis, you see, has zero tolerance of intolerance.

Claude and Doris, played to the hilt by Willard Waterman and Lee Patrick, are Conservative to the max, terribly unctuous and given to talking up close. Mame, on the other hand, is a Liberal and decidedly a provocateur.

The Upsons' flagstone patio is decorated to reflect "authentic Colonial Americana" (Doris' words), replete with assorted chachkes and a spinning wheel. (Robert Hanley and George James Hopkins collaborated on the witty set decorations for the film.) While plying Mame with "daiquiris made with honey" and canapes made of "strained tuna fish, clam juice and peanut butter" (a recipe from the Ladies Home Journal), the Upsons announce that they plan for Mame to go in with them and buy the adjoining property as a wedding gift for Patrick and their daughter, Gloria.

The phonograph in the background is playing "Tiptoe Through the Tulips," as Claude shakes his daiquiri mixture in time to the rhythm.

"But we have to move fast," Claude intones. "Some people are bidding on that property. The wrong kind. Fella named Epstein. A-bra-ham Epstein."

"This section is restricted only to our property line," Doris adds. "So we feel we have an obligation to make sure that - well - you know."

Exactly how Mame upends the Upsons' plans provides the film with the perfect punchline/comeuppance - and me with an indelible moment.

Made more than five decades ago, DaCosta's "Auntie Mame" remains a bracing, ever-modern cheer for the left that the right can enjoy.

~Lee Patrick, Rosalind Russell and Willard Waterman in a scene from "Auntie Mame"
~Warner Bros. 1958 ©
Posted by joe baltake at 11:00 AM

"Auntie Mame" tends to be written off by a lot of film writers, undeservedly so. Like you, I think it's a comedy that has really held up and remains absolutely hilarious. I love the scene you mention.

Alex- "Mame" gets the bum's rush from the "Cool Guys" (a small group of critics and film writers who keep citing and quoting one another) largely because they don't accept DaCosta as a legitimate filmmaker. He came from the stage and two of his three films are based on his Broadway successes - "Mame" and "The Music Man." And I love them both. (He also helmed the forgotten Robert Preston-Tony Randall-Walter Matthau comedy, "Island of Love.") He deserves as special post. Which I plan to pursue soon.