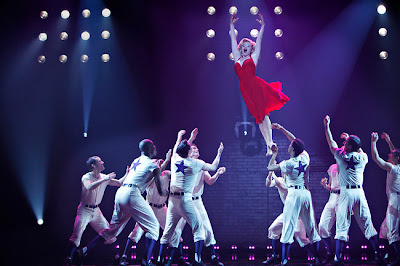 Where to start. There is so much annoying with the latest TV curiosity, "Smash," that it became immediately overwhelming and tiresome. An episodic soap opera about the mounting of a Broadway musical about Marilyn Monroe, the series wallows in the usual show-biz clichés - self-glorification, self-pity and self-indulgence.

But what's really endemic here - and what undermines the series - is an illogical quality that strips the project of any authenticity and charm. Case in point: A singer/dancer (Megan Hilty), hoping to play Marilyn in the show, and a troupe of chorus boys perform a number titled "The National Pastime" (one of several original songs written for the series by Marc Shaiman and Scott Wittman) in an empty, sprawling rehearsal hall.

The number should be as spartan as the setting, accompanied perhaps by only a tinkling piano. But instead, when the performers open their mouths to sing, out come pre-recorded voices, replete with full orchestral backing.

It should have been performed "live" and with the all usual rough edges. Rather, what could have been natural and organic - and even original - is presented as a foregone "showstopper," calculated to knock us out.

True, this sequence subsequently morphs into a full-dress, dramatically-lit performance on a stage, but the moments in the studio, with the dancers only in tights, would have been so much more refreshing done "live."

Just discovered your site – love it! I had the same reaction to this show. I kept hoping that it. I'd lable it “ineffectual” and a decided disappointment.

Apropos of nothing, Top 5 Overused Subjects In Backstage Movies:

This show is a transgression in just about every way possible. I don't mind the young brunette lead, but everyone else and everything else about "Smash" is IN YOUR FACE.

Now that "Glee" has finally withered and died, we have this being rammed at us. I'll pass.

Bill: I assume you mean GLEE's withering and death is of the creative variety, because as far as I know it hasn't been canceled.

I thought SMASH was okay, but Brad's list of overused subjects suggests why it might be hard to stick with it. Some of the tropes go back at least to 42ND STREET. What do you want to bet that Megan Hilty lands the Marilyn role, with Katherine McPhee as her understudy, but then something happens to Hilty on opening night that forces McPhee to go on in her place --- and she becomes A STAR!

Jay! I think you nailed it, plotwise. That's exactly what will happen - McPhee will be the understudy. Think she'll go on at the last minute? Hmmm. And, no, "Glee" lives on but it sure has lost its luster.

BAs for the way the baseball number was presented, it's obvious they didn't see how Bob Fosse presented the airline number in "All That Jazz".

And while the show is extremely cliche, I like the cast.

The guy writing in Rolling Stone wrote that if "Glee" is young and perky gay, "Smash" is depressed middle-aged gay. That says it all.