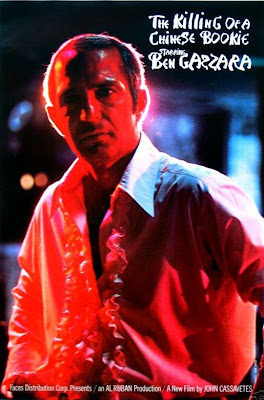 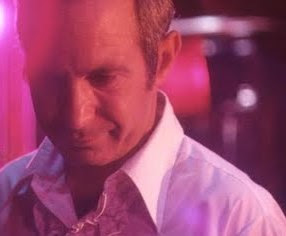 The passing of Ben Gazzara (1930–2012) - whose rich career is thoroughly covered in The New York Times by Neil Genzlinger. - brought back a memory of my interview with him in 1970 when he came to Philadelphia to promote John Cassavetes'
"Husbands" for Columbia on "The Mike Douglas Show."

In those days, the show was housed in a cramped space on Walnut Street, and its make-up room was a nook in the building's revamped basement. When I encountered Gazarra, he was sitting in one of the vintage barber chairs that the Douglas staff used to primp the guests.

Frankly, I can't remember any of the interview that followed but the image of Gazarra - sitting in that chair, chomping on a cigar and gesturing with flailing arms to a Philly friend who stopped by to say hello - remains burned in my brain: The actor was dressed in a white tuxedo shirt (collar rakishly open, natch) and black trousers (that could have been half of a black-tie suit). He looked like Cosmo Vittelli, the character he would create six years later for Cassavetes in "The Killing of a Chinese Bookie."

I remember Gazarra as both gragarious and imposing (he looked very much like a virile, impeccably-groomed, disarmingly polite mobster), with a gutteral voice and a quick, hearty laugh. Francis Ford Coppola really should have found a place for him in one of "The Godfather" films.

That's about all I remember, that once-vivid, now shadowy image. Our ensuing conversation is lost somewhere deep in my tearsheet archives. 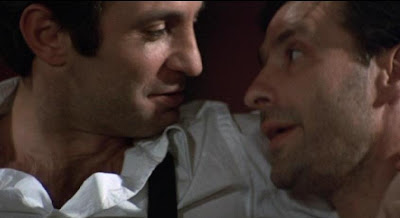 I always reveled in the continuously growing charisma of (the also manly sculpted facade) of one Ben Gazarra. Nice reminiscence.

Although they were never compared, I guess that Gazarra came from the Brando school of acting. But he invented his own kind of enhanced, hyper “realism” in his performances. Loved him in "Anatomy of a Murder" and "Husbands."

Acting is a mysterious, unquantifiable activity and the best actors - like Brando and Gazarra - thereby make it nearly impossible to discuss in critical terms. Consequently, I applaud your decision to remember Gazarra as a man, rather than an actor.