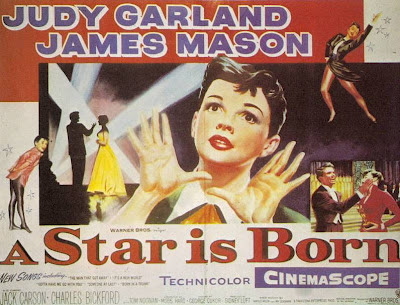 Turner Classic Movies will screen George Cukor's terrific - but also terrifically overrated - "A Star Is Born" at 5 p.m. on Oscar night, Sunday, February 26th, as part of its ongoing "31 Days of Oscar" calvacade.

The print runs 176 minutes - which is basically the truncated 154-minute version of the film pieced together with stills and audio of lost footage.

This apparently is as close to the 182-minute roadshow version that the restoration team could get. But wait! The fact is, "A Star Is Born" actually - originally - ran longer than 182 minutes. When it opened at at Hollywood's Pantages Theatre on September 24, 1954, the movie clocked in at 196 minutes - that's 3 hours and 16 minutes. This was the first - and also the last - time that this version of "A Star Is Born" was seen.

When it opened subsequently in its initial roadshow engagements about a month later, 14 minutes had already been taken out (apparently with Cukor's involvement), bringing the film to its 182-minute running time.

Back in those days, it was not uncommon for a roadshow film to be shortened for general release and so, "A Star Is Born" was cut again - by another 28 minutes (this time, without Cukor's involvement or approval) - leaving the film at 154 minutes, the version of record for the last 58 years.

Those excised 28 minutes would guarantee exhibitors another show per day - and Warner Bros. with a bigger box-office take.

This is nothing new. This is Hollywood. It was routine. It was also routine - and rather stupid - not to save the discarded elements from excised films.

And now, the few people at the Pantages who saw the original Original Version of "A Star Is Born" back in 1954 are probably all gone. Dead.

Along with all the precious missing footage.
Posted by joe baltake at 6:18 AM

I wanna see it all!

196 minutes was the length of the sneak preview version. The official released version, after Cukor-approved trimming, was 181, and the official cutting began from there.