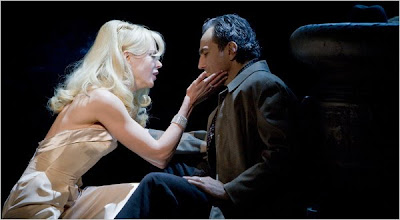 Rob Marshall's "Nine" is pretty much what I expected - which wasn't much. Full disclosure: For some reason, I consciously avoided both Broadway incarnations of the musical play from which it's been adapted.

This isn't a movie musical, per se, but something akin to one of those glitzy, psychedelic TV variety-show specials in the 1970s, with star Daniel Day-Lewis acting as host, ushering each elephantine production number in and out, in assembly-line fashion. And "elephantine" is the operative word for these soulless numbers. Marshall has calculated every single song-and-dance routine here as a whopping, in-your-face showstopper.

There are no modest, quiet numbers in "Nine" - amazing, considering that the film's original source material is all about ... introspection.

Also, why would a choreographer of all people hyper-edit his dance sequences into jarring slivers? I could see a filmmaker with no deep appreciation of dance doing that, but a choreographer? Gene Kelly and Fred Astaire must be roiling. I miss the days when one could savor a dancer in full frame/full body, doing his/her thing - when you saw the length of a dancer's body in movement, in minimally-cut takes. 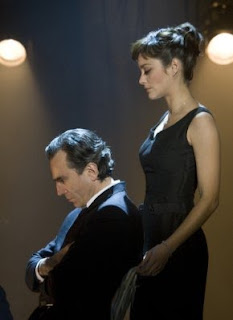 As artistically blocked filmmaker Guido, Day-Lewis is strangely resistible as a man who also allegedly drives many women to obsessive distraction. (We have to suspend disbelief about both his filmmaking and sexual talents.) But I do like the actresses here, even though they are all required to bump and grind their numbers. Particularly memorable and affecting are Penélope Cruz and Marion Cotillard - Cotillard being the only one who actually acts her songs, bringing an emotional life to them. And what songs! (Not to be taken as a compliment. I mean, those rhymes - "in his head"/"instead.")

Cotillard, like the others, isn't spared Marshall's fetishizing. She's been assigned a gratuitous strip titled "Take If Off" that my colleague Carrie Rickey of The Philadelphia Inquirer aptly compares to Ritz Hayworth's "Put the Blame on Mame" number from Charles Vidor's "Gilda" (1946) . But Marshall also references Natalie Wood here: Cotillard's hairstyle and dress and her coy removal of a glove are direct quotes from Mervyn LeRoy's "Gypsy" (1962). Initially. Then all the slithering sets in. 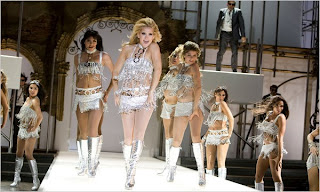 Hudson in her glitzy Big Number

The other actresses just sing - and move like big animatronic toys - making no impression. All except poor Kate Hudson who, unfortunately, stands out for a dubious reason: She seems to be channelling Ann-Margret (in her deranged "Viva Las Vegas" period) as she jumps up and down maniacally and shouts out the lyrics to something called “Cinema Italiano.”

And one Ann-Margert is quite enough for me.

The largely downbeat reviews parceled out to "Nine" - at least by the major film critics (led by A.O. Scott in The New York Times) - contrast sharply with the secondary pre-Oscar nominations awards and citations (Golden Globes, the SAGs, Critics' Choice, etc.) that have come its way.

This is nothing new. There's a history of questionable films being honored before the bad reviews come in. And it always reflects poorly on those eager award-givers. They've generously given "Nine" the same benefit of doubt that Rob Marshall expects us to extend to Guido.

Note in Passing: As a devoted movie-musical fan, there was a time when I'd rush out to buy the attending soundtrack album of each new film musical. Well, I've managed to restrain myself lately, passing on the recordings (as well as DVDs) of the film versions of "Dreamgirls," "The Phantom of the Opera," "Rent" and "The Producers," all blurs now.

Alas, "Nine" has joined this august group.
Posted by joe baltake at 9:26 AM

I downloaded "Be Italian" ( the film version ) from i-Tunes. That's about as far as I will go with the movie.

This movie was a real letdown. If you've seen the trailer, you've seen it. It's exactly the same, only longer. I was shocked by Nicole Kidman who seems to sleepwalk through her role.

I know what you mean, Pat. It's like she clocked in, did her gig and clocked out. Watching the film, I had this vision of the actresses going to and from the airport, brushing by each other.

Joe: Saw this yesterday, and you are spot on correct. I hated how the DayLweis chracter was imagining all the musical numbers. Maybe Marshall thought since it worked in "Chicago", it would work here? But a number would start and then be interrupted with reaction shots of Day-Lewis reacting to what he's thinking, then the number continues, just killing the number dead in its tracks. Perhaps Marshall thought audiences would not accept characters breaking into song - has he not seen the box office figures for "Hairspray" or "Mama Mia!"? One of the year's biggest disappointments.

Just spiritless. I had the same over-riding question leaving the screening: "How could a choreographer be so uninterested in presenting anything suggesting a dance performance in his film?"