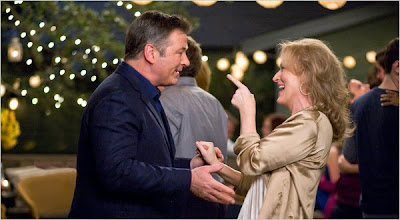 Baldwin bulldozes Streep in "It's Complicated"

In preamble to commenting on her new film, "It's Complicated," I should note that I am a big fan of Nancy Meyers'. Huge. Meyers is often lumped in with Nora Ephron because of the shared subjects that they pursue, but Meyers is the better director. Hands-down.

OK, with that out of the way, I have to say that I think there's a disconnect between the movie that Meyers thinks she made and what actually transpires in "It's Complicated."

The film is only marginally about an older woman (Meryl Streep), attractive and single, who not only suddenly finds herself balancing two men (Alec Baldwin and Steve Martin) but also having an affair with the ex-husband (Baldwin) she lost to a younger mistress 10 years earlier.

That may sound like a vaguely queasy premise, but what "It's Complicated" is really about is much more disturbing.

Step back and block out Streep and you'll see that the movie is really a strange - and strangely empathetic - tribute to a pig, namely the narcissistic ex and his self-obsessed bad behavior. Throughout most of the film, Baldwin's character gets what he wants when he wants it.

At one point, Baldwin pantomimes the words, "I'm so happy," to Streep. He looks perfectly content. She doesn't. He's a taker. She gets took.

This could be the theme of a tough dark comedy, but "It's Complicated" isn't that comedy. It isn't nearly complicated - or tough - enough.

Alec Baldwin may get third billing here but he's clearly the film's lead player, having more scenes than either Streep or Martin, and devouring each one in a morbidly obese way. To say that he chews on the scenery would be an understatement. And so, almost by default, good, gray Martin becomes a fast friend because he's so quiet, restrained and reserved.

Nit-Picking: Martin plays an architect in "It's Complicated." The film opens with Meryl Streep and family helping youngest child Zoe Kazan move out of the family house. Streep reflects that all her kids are gone now and her older daughter Caitlin Fitzgerald asks if she's afraid to sleep alone there. A couple of times later in the film, reference is made to her empty nest status. Given that, why on earth is Streep's character having an addition constructed on what seems to be an already huge house? I know this is only a movie, but it doesn't make sense. Shouldn't she be downsizing or moving? Wasn't there a better, more logical way to introduce Martin into her life other than using architecture? 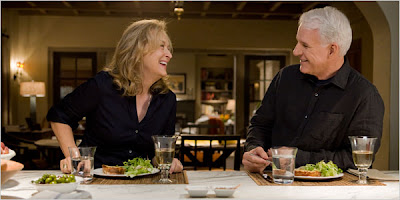 I love that Meyers turned out to be a much better director than her ex-husband. He was marginal at best. Loved "The Holiday".

I saw the film and found Baldwin's character not the least bit likable. What on earth is everyone laughing at???

Good point. My hunch is that audiences aren't laughing at the character but laughing with the actor. Baldwin has become hugely popular. He's experiencing a comeback that rivals John Travolta, tantamount to coming back from the dead, and he's clearly enjoying himself. Audiences traditionally have found that quality to be contagious.

the other review said...

I thought Alec Baldwin did a great job in this film. Although you could argue that alec baldwin plays an identical role in other film and movies. It works well here. I actually found the movie made the character too likeable. It made no sense to me why merly streep emphatically apologized to him during the affair. But I have a different spamtastic view of the film.

the other review said...

If anything the movie was not boring and Steep and Balwin were fun to watch. There was alot to think about, especially for we in the 50+ crowd. I agree with your comment on the home addition; however, the most unreal part (adding an addition to the already huge house) corresponds with what we see everyday.

For me, this movie was fun to watch in the beginning, and thru the middle. The ending left me feeling sad and hopeless for all 3 main characters. I paid to see a comedy and to be entertained. I got took.

Alec Baldwin should only leave already.
You are right about how he chews the scenery in It's Complicated.
And you're also right about questioning why Streep's character is building an addition instead of downsizing.
Read my review: http://dancirucci.blogspot.com/2010/01/nothing-complicated-about-it.html