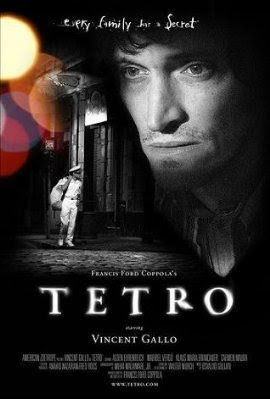 How one responds to the latter-day Francis Ford Coppola reveals, I suppose, what one likes about and expects from movies. Of late, Coppola hasn't engaged moviegoers, not even the art-house set, and has enthused critics in only a mild and often begrudging way.

His 2009 "Tetro" is his second consecutive movie to come on the scene with a whiff of anticipation, only to be greeted with a shrug and then promply forgottened. To the best of my knowledge, this aggressively arty, often painful pseudo-autobiographical film hasn't made one year-end 10 Best list. None. Nada. Almost the same, exact fate was experienced by Coppola's previous film, 2007's "Youth Without Youth," which was his first directorial effort in a decade (the last being 1997's "The Rainmaker").

But the chilling implications of "Tetro" cannot be denied - even its redemptive ending offers no surcease. A powerful, if somewhat limited, film, it should not be allowed to descend into oblivion.
Posted by joe baltake at 7:11 PM

Good Day!!! thepassionatemoviegoer.blogspot.com is one of the most outstanding innovative websites of its kind. I enjoy reading it every day. I will be back.

I think it's sae to acknowledge the influence of Coppola's family on "Tetro" more than any filmmaker, although his use of quick cutaways to certain images remind me of Ford. What I'm saying is that although it is a very cinemativ film, its allusions to other films and filmmakers are trumped by its autobiographical narrative.

I think "Terto" is part of the prgression towards more personal films for Coppola. I would say he's gone full circle, but he really hasn't because he started out making a genre film (Dementia 13) and then a personal film (Big Boy) before he started deconstructing the Classical Hollywood film (with Finian's Rainbow" and the "Godfather" films).

But during this period, personal films occasionally intervened (Rain People and The Conversation).

"Tetro" is just another detour before he comes back to the charm/structure of a Classical Hollywood film.

I'm looking forward to seeing Tetro. It barely got a release, so maybe it'll find its niche on DVD.

And some of the NY critics have given "Tetro" some love, including a film of the year vote from critic Aaron Hillis at Greencine.com. It's popped up on other lists that can be found here:

I can barely remember this film, so it's no wonder that it's been overlooked in the year-end consensus. I find this odd because the film was, as you say, so aggressively arty. “The implication, no matter how politely Coppola delivered his message, is: "If you don’t see the greatness here, you’re deficient." He should get back to making superior mainstream movies, not half-baked art jobs.

Thanks for the clarification, re the year-end movie laurels and for passing on the Voice link. I've read about 60 best lists so far, but I guess I missed the four which celebrated "Tetro." It only illustrates just how many opinions - and how many varied opinions - there are about film these days.

How many independent films about dysfunctional families do I have to sit through? I’ve done hard time on the planet Serious. And when I recommend on to friends,
they wonder why I hate them.

Personally, I'm on parole from seeing anything arty that has to do with troubled families or a troubled childhood.

c. badly and Ed- Some people might disgree with you on this issues, particularly those who seek out complex humanist filmmaking.