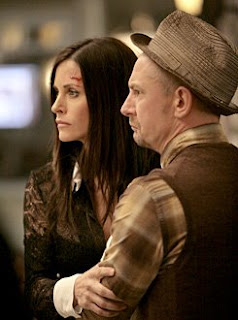 First the good news, then the bad news.

Courteney Cox and Ian Hart are still delicious fun in "Dirt." The bad news is that their show isn't - at least not any longer.

Based on a New York Times piece detailing revisions that were being made, I went into Sunday's new season of "Dirt" with low expectations.

My fears were warranted, it turns out.

The show is a good deal less sordid than it was last season, with its jaw-dropping sensationalism replaced this season with rather sophomoric takes on the real-life celebrity hijinks of Britney Spears (duplicated on "Dirt" by an avid Ashley Johnson) and Anna Nicole Smith (limned by a game and very witty Kiersten Warren).

Cox's sleazy editor now behaves like an intrepid reporter, not office-bound as she was during the first season, as she hops around from one sun-struck location to the next, and Hart's photographer has been subtly but noticeably sanitized and diluted.

Now about all that sun... Visually, the show is now much brighter than it was last season - literally. While it was something of a nighthawk during season one, with scenes holed up in dark bars and at even darker parties, "Dirt" is now largely filmed in the sun. Daytime scenes prevail.

It just doesn't feel like the same show. It no longer feels ... forbidden.

(Artwork: Courteney Cox as Lucy Spiller and Ian Hart as Don Conkey, both still pretty fab despite the watered-down version of the show.)

Anyone interested in perusing some 2060 of my film reviews, dating back to 1994, can do so by simply going to RottenTomatoes.Com
Posted by joe baltake at 9:20 PM

I haven't seen "Dirt" yet (don't worry I'm not a Nielsen family), but your post reminds me of the horrifying second season of "The Naked Truth" with Téa Leoni. The show turned from a splendid screwball comedy into a standard, thudding sitcom after its retooling.

I remember the Leoni show and liking its first season very much and then, someone got the bright idea to make it more conventional for the dim-wits among America's viewing public. The stupid rule!

Well, after two weeks, it's apparent that DIRT has lost its grime, and it's now a shiny hour-long sitcom. Too many obvious situations, too much obvious playing-to-the-audience... and the sudden sops to sentimentality are even worse. Oh, well...