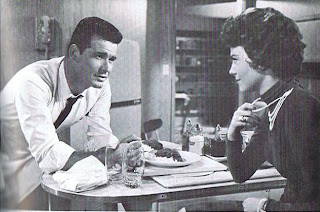 A case in point: Joseph Pevney's "Cash McCall," a 1960 title that paired Natalie Wood and James Garner, both active in the Warner Bros. stable and clearly honoring their respective contracts here.

Garner was fresh from television, having made a major impact as "Maverick" and moved into films with two military films, William A. Wellman's "Darby's Rangers" (1958) and Gordon Douglas's "Up Peiscope" (1959). He also supported Marlon Brando to good effect in Joshua Logan's "Sayonara" (1957).

There's no argument that "Cash McCall" is a decidedly minor, but undeniably engaging film about big business and romance. Based on Cameron Hawley's book, the movie casts Garner in the title role of a ruthless businessman whose lovelorn crush on his partner's enticing young daughter, played by Wood, could lead to his financial undoing.

In a way, this work is a distant cousin to the two business-oriented Universal romances, "Pillow Talk" (1959) and "Lover Come Back" (1961), that Doris Day would make with Rock Hudson - a trend that, for some bizarre reason, Warners failed to capitalize on.

Director Pevney was largely a TV hand, but he did some likable work in such varied films as Martin and Lewis' "3 Ring Circus" (1954), "Tammy and the Bachelor" and the James Cagney biopic about Lon Chaney, "The Man of a Thousand Faces" (both 1957) and "Twlight of the Gods" (1958).

Oh, God. I remember going on a movie date and seeing this film. That was another lifetime ago. Why on earth has it disapeared??