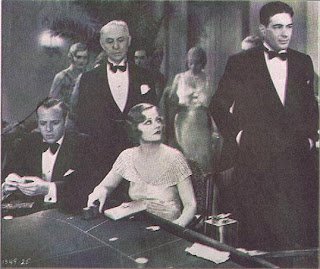 “The Cheat” has it all – sex, sadism, inflammatory racial issues and a socialite wife - a compulsive gambler and all-around handful known alternaltey as Edith Hardy and Elsa Carlyle. Doubling the fun is the fact that the material has been filmed twice and yet, despite being rather ubiquitous, it remains something of a secret among cineastes.

The story is the kind that can be easily personalized by a filmmaker, in much the same way that John M. Stahl and Douglas Sirk each reinvented their own version of Fanny Hurst’s “Imitation of Life.” Edith Hardy/Elsa Carlyle takes charity funds for which she is responsible and promptly gambles the money away, putting herself at the mercy of a sadistic man who will lend her the sum – but for a price. Before long, she is his sex slave and “property,” literally branded as such. When she shoots her evil benefactor, her husband assumes the blame.

The most celebrated of the two versions of "The Cheat" is the silent film made in 1915 by Cecil B. De Mille – starring Fannie Ward (in her first film) as Edith, Jack Dean as her husband and Sessue Hayakawa, in his breakthrough role as Hirshuru Tori, the Japanese businessman who entraps Edith. Paramount took so much heat because of the villain’s Japanese nationality that Hayakawa's character was changed to a Burmese for the film’s re-release three years later.

De Mille was also under attack, not surprisingly, for daring to depict a sexual affair between a Caucasian woman and an Asian man and for using the "branding" of Edith in the film as a metaphor for rape – a clear violation.

But, lurid storytelling notwithstanding, it’s the lighting distinguishes that De Mille’s movie (followed closely by Wilfred Buckland' painterly, miminalist art direction). Studios, which had used sets with glass ceilings up to that point to achieve natural lighting, began to move towards artificial lighting which could be more easily controlled for desired effects. De Mille takes full advantage of the change and does auspicious work here. “The Cheat” of 1915 fairly bristles with realism and modern aesthetics. It was way ahead of its time.

The filmmaker clearly worked in close collaboration with cinematographer Alvin Wyckoff, using low-keyed, shadowy chiaroscuro effects and silhouettes (of the actors posed behind rice-paper) to create the mood that drives the plot.

The performances, not that they really matter, are broad, although Hayakawa is such a riveting, commanding presence that it’s easy to see how this film triggered his lengthy movie career.

In De Mille’s film, the money that Edith squanders is from the Red Cross, of which she is treasurer. In George Abbott’s 1931 remake, the $10,000 that she loses is from the Milk Fund. There’s also one other change, a big one – the villain is no longer Asian.

Irving Pichel plays Hardy Livingstone, a roué just back from the Orient, where he picked up some dubious habits. The wealthy young Carlyles (Harvey Stephens and Tallulah Bankhead), catch his eye, particularly the wife Elsa. Bankhead is the big attraction in Abbott’s film, playing Elsa as a willful, recklessly impetuous woman capable of ruining her husband financially. It's a truly major performance - a lot of fun to watch.

Abbott’s “The Cheat” may not have the "Rembrandt lighting" that distinguishes De Mille’s movie, but it is every bit as arty, psychological and memorable – and it is also an excellent example of how movies took advantage of the pre-production code laxity that pervaded the films of the time. Abbott didn’t need symbolism to convey his ideas; his version is more literal and blatant.

"The Cheat" of 1931 was recently featured in "Universal Preservation: Pre-Code Films From the Universal and Paramount Libraries," a series devoted to, as Kenneth Turan put it in The Los Angeles Times, "this most exciting era of American film, a time when movies were just learning to talk and had the irrational exuberance to prove it." The series, highlighting recently restored films from the two studios, made between 1930 and 1934, played at the Billy Wilder Theater at the Hammer Museum in Westwood, from February 1 to February 23.

It was the third time in five years that the UCLA Film & Television Archive presented this invaluable series.

Note in Passing: De Mille's "The Cheat" is available from Image Entertainment has a double-feature DVD with "Carmen," also directed by C.B. It's available on Amazon.

Anyone interested in perusing some 2060 of my film reviews, dating back to 1994, can do so by simply going to RottenTomatoes.Com
Posted by joe baltake at 2:21 PM