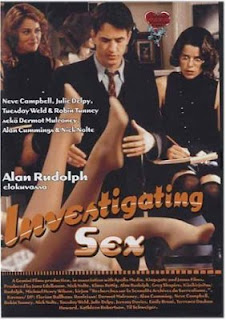 Diehard Alan Rudolph fans take note. The auteur's long-shelved "Investigating Sex," which played the film festival circuit in 2001, is finally available for us to peruse. Apparently, Rudolph had to go to Europe (Germany) to find funding for his film which is what led to its ultimate unraveling.

It is now available on DVD under the new title "Intimate Affairs." I thought you might want to know because if you came across that moniker in your local Blockbuster, you'd probably (and understandably) assume it was a Lifetime movie.

Audacious as ever, Rudolph does not let down his disciples with his examination of the free-thinking climate of bohemian Europe in the late 1920s, apparently based on real characters - from José Pierre's book, "Recherches sur la Sexualite Archives du Surealisme."

Witty in an intellectual way, "Investigateing Sex"/"Intimate Affairs" stars Dermot Mulroney as Edgar who oversees a circle of avant-garde pals in discussions of modern sexuality - which Edgar insists be dealt with in clinical detail.

Brought into the circle are two young stenographers - the sexually experienced Zoe (Robin Tunney) and the virginal Alice (Neve Campbell), with the understanding that they don't comment on what they hear and record. Rounding out the cast are Nick Nolte as a businessman and Tuesday Weld as his wife, whose villa Edgar uses for his sexed-up discussions. 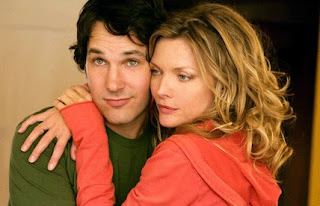 Reviewing the film from the 2001 Seattle Film Festival, Variety's Ken Eisner wrote,
"whether set in 1929 or 2001,
'Investigating Sex' already feels too dated, and far too timid, to spark any real exploration of mind or body."

There are also two other hard-luck titles that are going directly to DVD - Marshall Lewy's "Blue State," a game political satire starring Breckin Meyer as a disgruntled Democrat who actually follows through on a drunken campaign promise to move to Canada if George W. Bush gets re-elected and Anna Paquin as his unwitting traveling companion, and Amy Heckerling's May-September romance, "I Could Never Be Your Woman," which teams Michelle Pfeiffer with Paul Rudd. Like the Rudolph film, Heckerling's was apparently the victim of financing gone awry.

(Artwork: German poster art for Alan Rudolph's never-released-in-the-states "Investivating Sex" - aka "Intimate Affairs" - and Paul Rudd and Michelle Pfeiffer in Amy Herckling's direct-to-DVD "I Could Never Be Your Woman")

Anyone interested in perusing some 2060 of my film reviews, dating back to 1994, can do so by simply going to RottenTomatoes.Com
Posted by joe baltake at 8:22 PM

I found INVESTIGATING on Netflix a few weeks ago, and had never heard of it. And I'm a Rudolph fan. His first film, the horror film BARN OF THE NAKED DEAD, also recently got a DVD release.

And I saw I COULD NEVER BE YOUR WOMAN today. I'll be reviewing it soon, but it deserved a better release.

Thanks. I'll check out your review.

This is the first discussion of WOMAN I've seen that accurately describes it as a "May-September romance." Thanks for that. For some reason, writers generally use the phrase "May-December romance," which more closely describes the likes of HAROLD AND MAUDE or, say, ATLANTIC CITY...