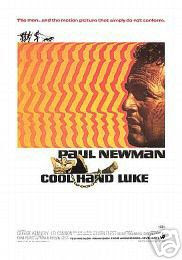 Word just came in that Stuart Rosenberg died today from a heart attack. One of our more underrated directors, he didn't receive half the attention that is routinely doled out to the usual suspects - i.e., Steven Spielberg, Martin Scorsese and Robert Altman.

After spending most of the 1950s and early '60s directing episodic TV ("The Untouchables," "The Naked City"), Rosenberg was hand-picked by Jack Lemmon to direct Paul Newman in Lemmon's first Jalem production, "Cool Hand Luke" in 1967. Two years later, he directed Lemmon and Catherine Deneuve in the enchanting and now-forgotten, "The April Fools."

For the next fifteen years or so, Rosenberg helmed an impressive list of modestly accomplished little films and if anyone out there is considering an at-home Stuart Rosenberg Film Festival, here are some titles, in addition to "Cool Hand Luke" and "The April Fools," that should be considered:

--"The Laughing Policeman" (1973), starring Walter Matthau in one of his best dramatic performances;

--"The Drowning Pool" (1975), with Newman reprising his Harper character;

--"The Pope of Greenwich Village" (1984), with both Mickey Rourke and Eric Roberts in bravura performances.

Anyone interested in perusing some 2060 of my film reviews, dating back to 1994, can do so by simply going to RottenTomatoes.Com
Posted by joe baltake at 7:57 PM

I thought I was the only one who knew of and admired Stuart Rosenberg. Thank you for remembering and honoring him.