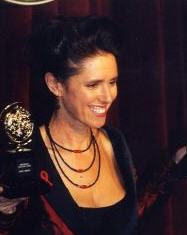 "All it takes is no talent."
-Tessie Tura in "Gypsy"

When Harvey Weinstein was running Miramax with his brother Bob, he earned the nickname Harvey Scissorhands because of his penchant for reshaping other filmmaker's movies in the editing room - his most triumphant hatchet job being Giuseppe Tornatore's "Cinema Paradiso"/"Nuovo cinema Paradiso," which was reduced from 170 minutes to 155 minutes to its final 123 minutes.

At the height of Weinstein's popularity and infamy, it was often asked what qualified him to do that to other people's films - I mean, aside from the fact that he was the boss. Well, Weinstein did make a couple films of his own - "Playing for Keeps" (1986) and "The Gnomes' Great Adventure" (1987). Never heard of them? Well, who did?

This is in preamble to asking the same question about Joe Roth, head of Revolution Studios, who reportedly has trimmed Julie Taymor's upcoming movie musical, "Across the Universe" from 128 minutes to approximately 98 minutes - much to the chagrin of Taymor, of course.

Roth's qualifications? Well, he is also an occasional filmmaker, having been responsible for "Revenge of the Nerds II: Nerds in Paradise," the atrocious "Christmas with the Kranks" and the tolerable "Freedomland." Yep, that's his personal filmography. Honest. I couldn't make that up.

(Artwork: Julie Taymor - director of "The Lion King" on stage and, on film, "Titus," "Frida" and the upcoming "Across the Universe" - at a Tony Awards ceremony)

Anyone interested in perusing some 2060 of my film reviews, dating back to 1994, can do so by simply going to RottenTomatoes.Com
Posted by joe baltake at 2:37 PM

How often have we gone through this? It's just publicity. Whether or not the full version is released in theaters is besides the point. It's bound to be on the DVD, right?